Homemade pumpkin spice latte tastes way better than the Starbucks version, takes pantry staples, is more economical, and can be made in less time than picking one up from the coffee shop, so what do you have to lose?

This recipe takes eight simple ingredients, many of which you'll have in your cupboard or fridge.  No artificial flavors or colors in sight!

What is pumpkin spice latte?

It is a pumpkin-flavored fall coffee drink originally created by Starbucks in 2003. The Starbucks PSL consists of espresso, foamed milk, and pumpkin spice sauce, which contains a small amount of pumpkin puree. The drink is usually garnished with whipped cream and a sprinkle of pie spice.

Peter Dukes, a former basketball player with degrees in economics and business, started working at Starbucks in 2001. Two years later, Peter and a team of Starbucks employees developed an espresso-based drink with pumpkin pie flavors. The drink has been an instant success since its introduction in 2003, and has even become a symbol of “basic” mainstream American culture.

My copycat recipe has subtle hints of coffee with a creamy, spicy flavor. The whipped cream and pie spice on top boosts the autumn flavors.

Overall, a Starbucks it isn’t healthy. A grande PSL made with 2% milk and topped with whipped cream contains an astonishing 50g of sugar! It’s much healthier to make your own PSL at home, without all the extra sugar, coloring, and preservatives that are in the Starbucks version.

This homemade version contains just 302 calories, not including the whipped cream garnish. Even though it's a little higher in calories than the Starbucks version, our recipe is made with high quality, all-natural ingredients and doesn't compromise on taste.

Do you serve it hot or cold?

You can serve it hot or cold; both ways are popular. My recipe gives the instructions for making a hot version, but feel free to use cold brew coffee and serve over ice instead.

Neither Starbucks’ recipe nor my recipe is vegan, but you can make a vegan version simply by swapping the dairy milk for full-fat coconut milk.  Use coconut cream instead of heavy whipping cream. Note on Non-Dairy Milks: it’s best to use coconut milk for making lattes.  Almond milk doesn’t contain enough fat to get a nice froth.

Does it have coffee in it?

Yes, it does have coffee in it. The Starbucks version is made with espresso, while my recipe uses strong coffee instead.

How to Make a PSL without Coffee

Want to make a caffeine-free latte for kiddos or for when you want to go to bed early? Here’s how to do it! Substitute decaf black tea for the coffee.  This makes it similar to a London Fog, a latte made from Earl Grey tea and foamed milk. Omit the coffee entirely.  Just keep in mind that the drink won’t taste the same; it will be much richer and sweeter. You'll probably want to dilute it with milk.

Put the puree, pie spice, pepper, and brown sugar in a small saucepan over medium heat.  Cook for about 2 minutes on medium heat until it begins to bubble and smells spicy.  Stir in the vanilla extract.

Pour the milk and cream into saucepan and heat until simmering.  Be sure to whisk until the pumpkin mixture is incorporated into the milk.

Blend the milk in a blender for at least 60 seconds on high speed until very well mixed and foamy.

Pour ½ cup of coffee  or ¼ cup of espresso into a glass.

Pour ⅔ cup of the milk mixture on top and gently stir to combine.

Top with homemade whipped cream.  (It's super easy and tastes SO much better than store-bought.)  Sprinkle on some pie spice and enjoy!

How to Make It Healthier

Use these ingredients for a skinny PSL and follow the directions as written in the recipe card at the bottom of this post.  Skip the whipped cream garnish to save extra calories and fat. 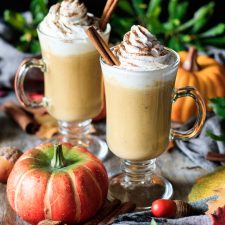 How to Make a Starbucks Pumpkin Spice Latte

For the Pumpkin Milk Concentrate (3 cups)

For the Latte & Decoration

Assembling and Decorating the Latte

This post was originally published in October 2017 and updated in September 2018 and August 2019.