Make your own cinnamon raisin rolls from scratch with our fail proof recipe.  Learn how to make these delicious rolls in a few simple steps.

If you love eating sweet breads, you'll need to try our copycat Cinnabon cinnamon rolls or our cinnamon babka.

You don't need anything fancy to whip up these cinnamon raisin rolls! Let's talk about the key ingredients in this simple sweet bread recipe.

3. Knead the dough until it's stretchy and passes the windowpane test as described in the recipe card.

4. Shape into a bowl and place in a covered bowl and let it prove until it's at least doubled in size, about 1 hour.

5. Punch down, roll out into a rectangle, and spread with softened butter.  Sprinkle cinnamon and raisins on top. Roll the dough up tightly from one of the short ends of the rectangle, pinch the seams to seal, and slice into buns.

6. Place the buns in a greased 9x13-inch pan.  Let them prove until springy to the touch, about 45 minutes.

8. Brush the buns with warm apricot jam to give them a lovely shine and sticky exterior.

Should I soak raisins before adding to bread dough?

Yes, you can definitely soak raisins before adding to bread dough to make them softer and juicier. You can soak raisins in a little boiling water, but you can also soak them in juice, tea, or alcohol such as rum or brandy. Whatever liquid you choose, soak them for 20-30 minutes, then drain them and use in the cinnamon rolls.

How do you keep cinnamon rolls soft and moist?

The main thing is to avoid overbaking them. Take the rolls out as soon as they have an internal temperature of 190°F on a digital thermometer, and they'll stay soft and tender. Overbaking will cause them to be dry and unappetizing.

Why are my cinnamon rolls chewy?

Good cinnamon rolls should have a slight chewiness and fluffiness to them, which comes from using bread flour instead of all-purpose. However, if your rolls are excessively chewy, they may have been kneaded too long or didn't rise long enough.

Should cinnamon rolls touch when baking?

It depends on the texture you're looking for. If you want soft, gooey cinnamon rolls, then make sure that the sides touch when they're rising. If you want firm edges all the way around, spread the rolls farther apart on a cookie sheet.

Many families in the U.S. like to serve homemade cinnamon rolls for breakfast hot out of the oven on Christmas morning or for other special days. If you are looking to round out your breakfast, we suggest a fruit salad, a vegetable omelet, and coffee.

If you like to serve a icing on top, instead of a marmalade glaze, we suggest a sugar glaze or a cream cheese frosting. You can spread the glaze or frosting on as soon as they come out of the oven so it soaks into the rolls. 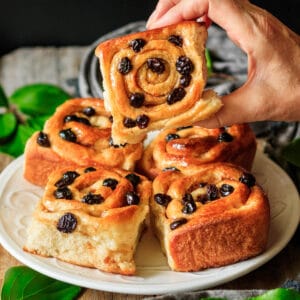 SaveThis cinnamon raisin rolls recipe was originally published on August 15, 2017 and was updated with new photos and updated content on July 16, 2022.SavSa