Want to eat king cake this Mardi Gras, but don't want to fork out a lot of money to buy one?  The answer: make one from scratch.  It's so much cheaper--and surprisingly simple!  The sweet cinnamon filling swirled inside and the tangy lemon icing make this a sweet treat your whole family will love!

If you love sweet breads, you'll definitely want to try my recipe for Rosca de Reyes and these Cinnabon cinnamon rolls.

Let's talk about the key ingredients in this king cake recipe. Fortunately, you'll be able to get all of these from your local grocery store; there's no need to place an online order!

2. Mix in the sugar, eggs, and lemon zest until blended.  Gradually pour in the milk mixture and mix until a sticky dough has formed.

3. Knead with the dough hook until the dough is smooth and no longer sticky to the touch.  The dough should also pass the windowpane test (see the recipe card for an explanation of this).

4. Shape the dough into a ball and let it rise in a warm place until doubled in size, about 1 hour.

5. Mix together the brown sugar and cinnamon until well blended.  Punch down the dough and roll it into a 24x8-inch rectangle.  Brush the melted butter over the dough and sprinkle the sugar-cinnamon mixture on top.  Roll into a log from one of the long sides, pinch the seam and ends to seal, and form into a circle.  Squeeze the ends together tightly, then place on a parchment-lined cookie sheet.

6. Cover the king cake with plastic wrap and let it prove in a warm place until puffy and springy to the touch, about 45-60 minutes.

7. Bake the king cake at 375°F for 30 minutes, covering it with aluminum foil after 20 minutes if it's getting too dark.  The king cake should have an internal temperature of 190 F on a meat thermometer.  Let it cool completely on a wire rack.

8. Sift the icing sugar into a bowl and gradually mix in the lemon juice and milk to make a thick but pourable icing. Spread the icing on top and let it set for 3 minutes.

9. Sprinkle the colored sugar on top, using pieces of plastic wrap to keep the sections separate as you sprinkle.

10. Hide a baby Jesus figurine (affiliate) in the king cake, then slice and serve.

What is king cake from Louisiana?

In Louisiana, king cake is a circular sweet bread filled with cinnamon sugar or cream cheese and decorated with white icing and green, yellow, and purple sugar. Sometimes, it includes raisins or candied fruit as well.

What does it mean if you get the baby in the king cake?

Whoever finds baby Jesus is supposed to bring the king cake for the next Mardi Gras party. Long ago, finding the baby meant you would be king for the day.

What is the tradition of king cake?

King cake is made to honor the three wise men (kings) who visited young Jesus, and is traditionally served on Epiphany (January 6) and up until Shrove Tuesday or Mardi Gras (the day before Lent starts).  It's a variation of the Spanish bread rosca de reyes.
For many years, king cake has been popular around Mardi Gras, and is usually decorated with green, yellow, and purple sugar to commemorate Carnival. The colors represent faith (green), power (gold), and justice (purple). The king cake's round shape symbolizes a crown.

New Orleans king cake tastes much like a cinnamon roll. I've added lemon to this recipe, which makes it all the more delightful!

How long does king cake last?

Can you freeze king cake?

Absolutely!  Cut the king cake into slices first for ease, then seal it tightly in a zip-top freezer bag and freeze for up to 3 months.  Defrost in the microwave or at room temperature.

If you liked this king cake recipe and found it helpful, give it some love by sharing! 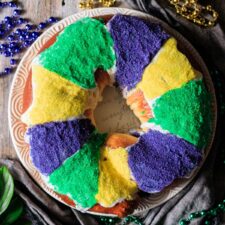