In Spanish-speaking countries, January 6 is an important holiday called Epiphany.  This special bread, called Rosca de Reyes, is served to commemorate when the three Magi from the East visited Jesus and gave Him special gifts.  That's why this dessert, literally named "ring of kings," is made to look like a king's crown decorated with jewels.

Where did Rosca de Reyes originate?

The original concept of making a bread decorated with fruit originates from ancient Rome. The idea was brought to France, where it was incorporated with Christian celebrations. Eventually, the Spaniards started making a Rosca de Reyes for Epiphany.

This treat was brought to Mexico by the Spaniards, where it has continued to be popular today. Over 4 million Rosca de Reyes are sold in Mexico each year!

This dessert might remind you of king cake, and they do have some similarities. However, king cake is an Americanized version, and typically is filled with a cream cheese or cinnamon mixture and is decorated with white icing and green, purple, and yellow sugar. Rosca de Reyes looks and tastes quite different from king cake.

Fortunately, it doesn't take any hard-to-find ingredients to make a beautiful Rosca de Reyes for Epiphany! Let's talk about the key ingredients in this Mexican dessert.

2. Add the sugar, butter, eggs, orange zest, and orange extract, then mix everything together until a dry dough forms. Gradually add the milk to form a slightly sticky dough.  Make sure no flour is sitting at the bottom of the bowl.

3. Knead the dough on a floured surface for 10-15 minutes, until it is smooth and no longer so sticky.  It should also pass the windowpane test, which means that you can stretch a piece of the dough thin enough to see the light through it.

4. Place it in a bowl, cover tightly with plastic wrap, and let it prove in a warm place until it's almost doubled in size.  This will take at least 1 ½ hours.

5. During the first prove, make the decoration paste.  This is similar to cookie dough, and will be formed into strips to decorate the Rosca de Reyes before it bakes.  Chill it in a plastic-wrapped disc for 20-30 minutes to make it easier to handle.

6. Now, divide the paste into six pieces and shape each one into a rectangular strip.  Cut a few thin strips of guava paste, and grab some colored cherries.

7. Once the dough has proved, punch it down to knock out the air bubbles.  Shape into a round ball, then poke a hole in the middle with your finger.  Stretch the dough to make a ring, then lay it on a parchment-lined cookie sheet.

8. Cover the Rosca de Reyes with plastic wrap and let it prove in a warm place until the it springs back quickly when you press it.  This should take about 45 minutes.

9. Just before it goes in the oven, brush it all over with beaten egg.  Decorate it with the paste strips, guava strips, and the candied cherries.  Sprinkle with some granulated sugar for crunch and sweetness.

11. After the Rosca de Reyes has cooled, insert the baby figurine from the bottom so no one can see where it is hidden.  Let each guest slice their own piece and see who gets the Jesus figurine!

What is in the Rosca de Reyes?

It is a sweet yeast bread shaped in a ring and decorated with dried or candied fruit. It is traditionally served on January 6 in Spanish countries. It has a wonderful orange flavor and soft, cake-like texture.

What does it mean when you get the baby in the Rosca de Reyes?

Traditionally in Mexico, you would become the godparent of the little child Jesus. You would need to make tamales and hot chocolate and host a party on February 2, or Candlemas Day, which celebrates Jesus' presentation in the Temple.

What does the baby Jesus in the Rosca mean?

There is actually a lot of symbolism in the Three Kings bread. It resembles a king's crown, which symbolizes the Magi that gave gifts to Jesus on Epiphany. The round shape represents God's never-ending love, and the candied fruit looks like the jewels on a crown.
The child figurine hidden inside represents Jesus hiding from the evil Roman king Herod, while the knife that slices it symbolizes the danger that Jesus was in from the Romans. Eating the Rosca de Reyes symbolizes communion with Jesus.

What does Rosca de Reyes mean in English?

The name literally means the "ring of kings."

Rosca de Reyes will keep at room temperature for up to 1 day, as long as it is tightly sealed. For best freshness, slice and freeze it in a freezer bag for up to 1 month. Defrost in the microwave for 30 seconds per slice. 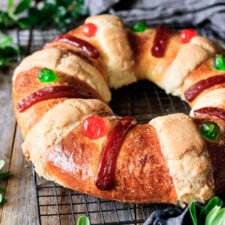 For the Decoration Paste

This post was originally published on January 6, 2020 and was republished on December 2021 with updated, reformatted content and resized photos.