Craving a gooey, fluffy Cinnabon roll, but you're nowhere near a Cinnabon location?  No problem.  Once you try this recipe, you'll agree with my family that this recipe makes cinnamon rolls that taste even better than the Cinnabon ones.

Love cinnamon breads? Make sure to try this kanellängd recipe and this Swedish tea ring.

There are several ingredients in my copycat Cinnabon cinnamon roll dough.  Let's go through the key ingredients and see how it makes them so delicious.

3. Add the two eggs and half of the warm milk. Mix the ingredients together with your hand, gradually adding more warm milk as needed to create a slightly sticky dough.

4. Knead the dough on a lightly floured surface for 10-15 minutes.  Shape into a ball, place in a buttered bowl, and cover with plastic wrap. Set the bowl of dough in a warm place until it has doubled in size, about 1 ½ to 2 hours.

5. Once the dough has doubled in size, flip it out onto a floured surface and punch it down all over to knock out the big gas bubbles. Roll out the dough until it measures at least 19x19 inches.

6. Spread the softened butter all over, then sprinkle on the cinnamon-sugar mixture.

7. Start rolling up the dough from the side closest to you.  Fold over the edge just a little, then keep rolling until you have a log. Pinch the seam and ends tightly to seal.

Chop off the uneven ends of the log with a bench scraper and use the scraper to mark the dough in 12 equal pieces.  I nicked mine about every 1 ½ inches.

8. Now, cut the log into 12 rolls.  I like to use a piece of thread for this, because a knife tends to flatten the roll.  To cut with a thread, place the thread under the log and draw it tightly around the log until it cuts through.

9. Place the 12 cinnamon rolls in an unbuttered 11x14-inch pan.  It's crucial to use an extra large pan here to give the rolls room to rise out.  They'll grow a lot!

10. Cover the pan with plastic wrap and set aside to prove in a warm place until they are springy to the touch, about 30 minutes. They should have noticeably increased in size, and the dough should spring back into place if you gently prod it with your fingertip.

11. Cover the pan of rolls loosely with aluminum foil and bake at 400°F for 25 minutes, then uncover them and bake for another 5 minutes to brown them slightly.  Whip up the cream cheese frosting while the rolls bake.

12. Immediately after they come out of the oven, spread on the cream cheese frosting.

13. Let the cinnamon rolls cool for about 10 minutes, then enjoy these amazing Cinnabon copycat rolls!

What kind of cinnamon does Cinnabon use?

Cinnabon uses a blend called Makara from the Korintjie (affiliate) region in Indonesia, and it has a very strong flavor. If you can't find Korintjie cinnamon, Saigon (affiliate) is a great option too.

Why is Cinnabon so unhealthy?

Cinnabon cinnamon rolls have a soft, fluffy texture, a strong cinnamon flavor, and lots of gooey brown sugar filling. The cream cheese frosting on top gives sweetness and creaminess to the rolls as well. In this Cinnabon copycat recipe, I replicated all the fluffiness and gooeyness that you love about Cinnabon's cinnamon rolls!

How long do cinnamon rolls last?

You can keep cinnamon rolls tightly covered at room temperature for up to two days, but they will stay much fresher if you freeze them after they have been baked and cooled. Seal them inside of a zip-top freezer bag and freeze for up to 1 month.

If you liked this copycat Cinnabon cinnamon roll recipe and found it helpful, give it some love by sharing! 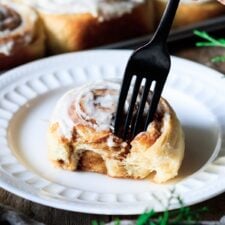 For the Cream Cheese Frosting

This post was originally published on December 13, 2019 and was republished on October 31, 2019 with updated content and reformatted photos.