Figgy pudding will be the star of your Christmas dinner!  Just like Mrs. Crachit from A Christmas Carol, you can enjoy each bite of this moist, flavorful dish.  It's easy to put together; just make it in advance, and you'll have an unforgettable Christmas dessert.

Figgy pudding contains a number of ingredients, but most of them are easy to find at your local grocery store.

2. Beat the butter until pale, about 2 minutes.

3. Add the brown sugar and beat until fluffy, about 1 minute. Pour in the molasses, then beat in the eggs one at a time.  Add a spoonful of flour with each egg to prevent the batter from curdling.

4. Sprinkle on the flour, spices, baking powder, orange zest, and breadcrumbs, then fold everything together until well blended.

5. Dump in the chopped walnuts and the soaked fruit mixture along with any liquid, then mix until evenly combined.

6. Grease the pudding basin and line the base with parchment paper, then pack the mixture into the basin.

7. Cover with the parchment and foil, tying it tightly with string under the lip of the basin to secure. Tie a string handle onto the rim so you can easily remove it from the pot of boiling water later.

8. Bring a kettle of water to a boil.  Meanwhile, place a metal jam jar lid in a large Dutch oven.

9. Place the pudding inside of the pot, sitting it on top of the jam jar lid.  Pour boiling water halfway up the side of the basin and return the pot to a boil.  Turn down to a simmer and cook for 4-5 hours. Check it every hour or so and add more water to keep the level halfway up the basin.

10. The pudding is done when it is a rich, dark brown.  A skewer inserted into the center should come out clean.

11. Let it cool completely, then re-cover it with fresh parchment and foil and let it age for at least 4 weeks before serving.  Steam it for 1 ½ hours before serving to warm it, then serve with brandy butter.

What is figgy pudding made of?

Figgy pudding is a moist cake full of dried fruit, and tastes similar to plum pudding. Traditionally, it's steamed in a pot of boiling water, and is aged in a cool, dark place for a few weeks before serving. It consists of a dense cake batter, dried fruit, nuts, spices, breadcrumbs, and brandy. It traditionally uses suet in place of butter.

Why is it called figgy pudding?

It is so named because it contains figs. In the UK, steamed cakes like this are called puddings. In addition, the term "pudding" also can refer to dessert in general.

Does figgy pudding have figs?

What is hidden in a figgy pudding?

It was common for the baker to hide a sixpence (silver coin) in the figgy pudding. According to legend, whoever found the sixpence would have good luck in the coming new year.

Flaming the pudding right before serving it is optional, but definitely makes for an awe-inspiring experience at Christmas dinner!  Here's how to do it.

Can I make figgy pudding ahead?

Yes, you must make it at least 4 weeks in advance.  The most popular time is on Stir Up Sunday, which is the last Sunday before Advent.  If you eat it right away, it will not taste good.  It needs at least a month of aging time in a cool, dark place to develop the rich flavors that make it so delicious.

Does figgy pudding need to be refrigerated?

No, it does not need to be refrigerated.  It will keep for a year in a cool, dark, dry place if it is tightly wrapped in plastic wrap and foil.  The alcohol and the high sugar content from the dried fruit will keep it preserved.

Can you freeze figgy pudding?

Yes, you can freeze it.  Make sure it has aged for at least 4 weeks in a cool, dry place before freezing.

To freeze, remove it from the basin and wrap it tightly in two layers of plastic wrap, followed by a layer of aluminum foil.  Freeze for up to 1 year, then defrost at room temperature.  Warm and serve with brandy butter. 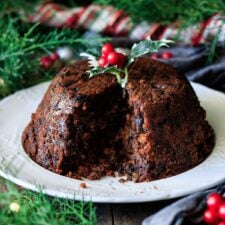 For the Fruit Mixture

For the Cake Batter

This post was originally published on November 24, 2019 and was updated on November 15, 2021 with updated photos and information.