Are you making a British recipe, but not sure what mixed spice is or where to purchase it? If so, you're in the right place! It's easy to whip up homemade mixed spice to use in sweet (and even some savory) dishes from the UK.

If you're looking for ways to use mixed spice, you'll definitely want to try my recipes for Jamaican ginger cake and Christmas plum pudding.

The key spices used in mixed spice are cinnamon, nutmeg, allspice, cloves, ginger, coriander, and mace. Feel free to tweak the ratios to your taste preferences.

If you have whole nutmegs and a microplane, make sure to grate your own nutmeg fresh; it tastes and smells amazing!

Pour all the spices into a bowl.

You should have seven spices in all.

Whisk until the spices are well combined, then strain through a mesh sieve to remove any lumps or larger chunks of spices.

Use right away in your favorite British baking recipes.

Store extra in an airtight container in a cool, dry place for up to 6 months.

Where can I buy mixed spice?

Unless you're in the UK, it's hard to find mixed spice in supermarkets, and it's expensive to order a bottle online from import grocers. It's definitely much faster and cheaper to make your own.

What can I use as a substitute for mixed spice?

This British blend really has a distinct flavor, so I'd suggest making your own rather than substituting it.  If you're in a real pinch, the closest alternative is pumpkin pie spice, but realize that substituting will definitely change the flavor of your baked goods.

Can I make my own mixed spice?

Absolutely! Just whisk everything together until well blended, then store in an airtight container away from light and heat for up to 3 months.

Is mixed spice the same as allspice?

No; they're not the same.  Allspice are unripe, dried berries from the tropical plant pimenta dioica (Jamaican pepper), while mixed spice is a blend of several different spices, including allspice.  This chart contrasts the differences.

When and where did mixed spice originate?

Mixed spice is a British spice blend with somewhat uncertain origins. Since it was called different names like "sweet spice," it's hard to pinpoint when it was originally created. Historians have been able to trace one of the first published recipes to a cookery book published in 1795.

Now, you have a whole bottle of mixed spice to use! Let's explore some delicious ways to use this fragrant sweet spice mixture.

Use mixed spice in these delicious British recipes! 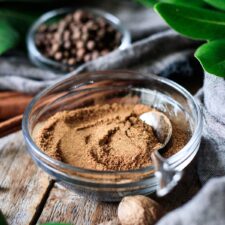