Did you know that the traditional flavor for this delicious Jewish bread is actually cinnamon and not chocolate? You'll love the soft, fluffy texture and yummy flavor in this epic cinnamon babka.

Babka is a Jewish sweet bread originating in Poland or Ukraine and is typically filled with a paste made from cinnamon, butter, sugar, and flour. The bread is twisted into a beautiful shape and baked in a loaf pan.

The name babka literally means "little grandmother" and was often baked in a pan that resembled the shape of an old woman's skirt. The word itself comes from a Slavic language (likely either Polish or Ukrainian in origin).

Fortunately, cinnamon babka doesn't take any unusual ingredients. You probably have almost all of these already in your pantry or fridge.

Gather the ingredients for our cinnamon babka recipe.

3. Knead with the dough hook until the dough passes the windowpane test, about 2-3 minutes. (See the recipe card for a description of this technique.)

4. Cover and let the babka dough rise in the fridge for at least 8 hours but no more than 24 hours.

5. Mix up the filling ingredients to form a smooth paste.

6. Let the dough warm up for 1 hour, then punch it down and roll it into a 9x24-inch rectangle. Spread the filling on top, roll into a log, and pinch the ends and seam to seal.

7. Split the log in half lengthwise, then turn the lengths filling side up and twist them together.

8. Place the babka in a parchment-lined loaf pan, cover, and let rise until the dough slowly springs back when prodded with a fingertip, about 1 hour.

9. Bake the cinnamon babka at 350°F for 50 minutes, covering it with foil after 20 minutes if it starts to get dark. Brush with the simple syrup and let it cool in the tin for 15 minutes before allowing it to cool completely on a wire rack.

10. Once the cinnamon babka has cooled, slice it and enjoy!

What nationality is babka?

Babka is a Jewish bread that originated in Poland and Ukraine but has gained great popularity among Jews and Gentiles alike in the United States. It is also a popular treat in Israel.

What flavor is babka?

Cinnamon babka tastes almost exactly like a fluffy cinnamon roll. It is sweet, buttery, and has a light texture, which makes it hard to stop eating. The bread is very soft even after baking, which makes it especially mouth watering.

What do you eat with babka?

Enjoying babka at breakfast, for dessert, or with coffee and tea are all great ways to eat this tasty sweet bread. You can serve it plain or spread it with butter.

How many calories are in a slice of babka?

My cinnamon babka recipe makes one large loaf, which is usually cut into twelve slices. Each slice of that size contains 404 calories, 16g fat, 59g carbs, 27g sugars, and 7g protein. For the full nutrition facts, scroll to the bottom of the recipe card. 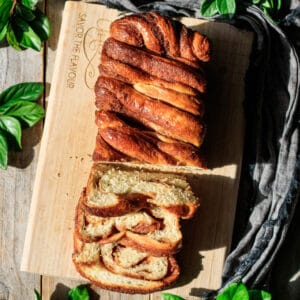 Our cinnamon babka recipe was originally posted on September 3, 2021.