The first time I tried Boston cream pie was several years ago, but I've never forgotten that amazing dessert.  The tender cake, velvety Boston cream filling, and creamy chocolate topping is just divine.  If you follow the simple steps below, you'll be able to make your own from scratch! 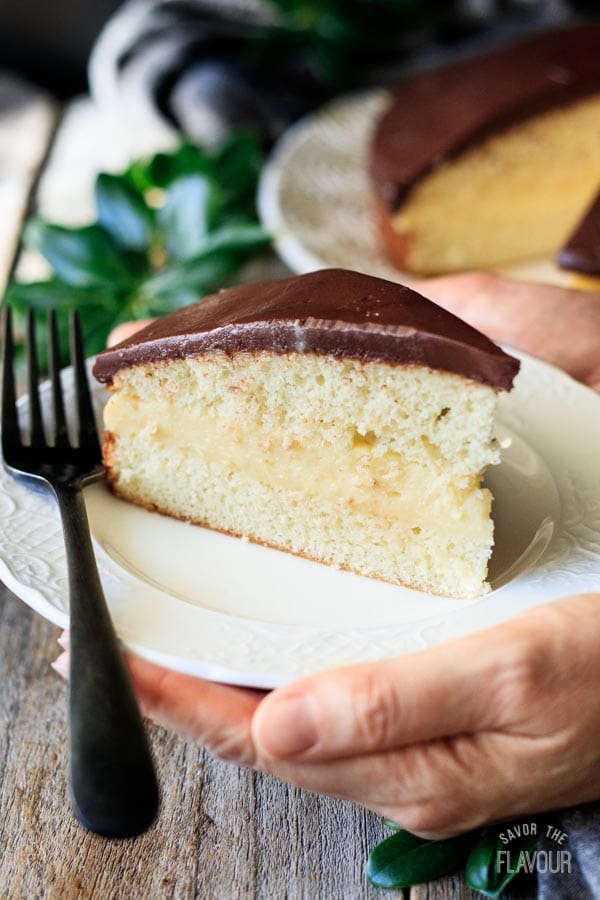 What is Boston cream pie?

It is not a pie, but a cake.  It consists of two layers of hot milk cake filled with vanilla pudding and topped with creamy chocolate ganache.  This delicious dessert is the state dessert of Massachusetts.

Where was it invented?

This dessert was first made back in 1881 at the Parker House hotel in Boston, Massachusetts.  A French chef named Raelyn is credited with inventing this delicious dessert.

His Boston cream pie was a little different from the modern-day one, however.  It consisted of a butter cake split in half and brushed with rum syrup, then filled with vanilla pudding (known as crème pâtissière in French).  The sides were spread with crème pâtissière and decorated with sliced almonds, while the top was covered with chocolate fondant.

Back in the 1950s, Betty Crocker introduced boxed mixes for the cake, pudding, and chocolate icing to make it simpler for the average home baker.  She omitted the syrup and sliced almonds and used an icing instead of fondant on top.  This simplified version seems to have outshined the old one in popularity among home bakers! 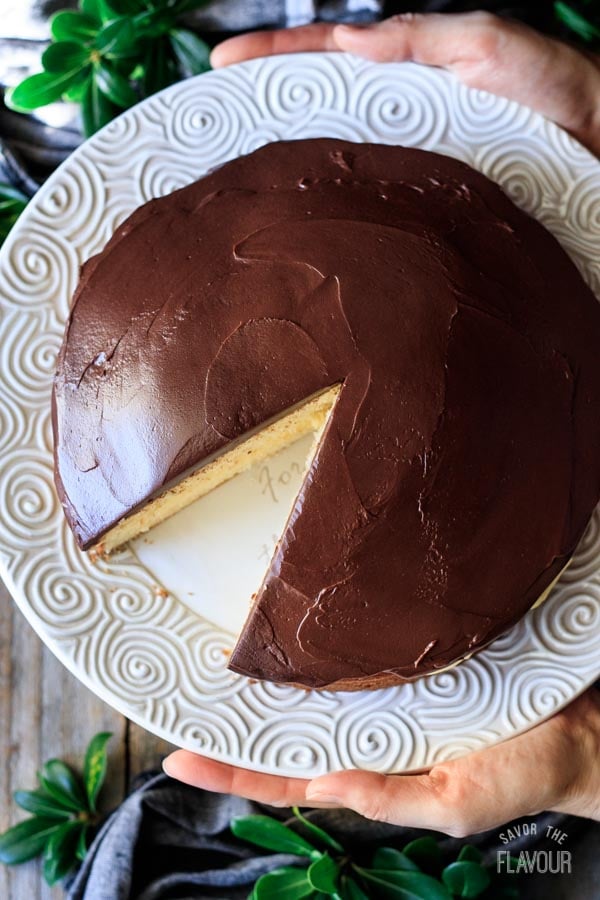 Why is it called pie?

Back in the 1880s when it was invented, cakes and pies were often baked in the same pans.  That's why their names were often interchangeable.  I'm glad we stick to one name for each dessert nowadays!

What is Boston cream filling made of?

It is made from just a few simple ingredients: milk, egg yolks, sugar, cornstarch, flour, and vanilla.  It's the same thing as the French crème pâtissière or American vanilla pudding.  You can whisk up the filling in just a few minutes! 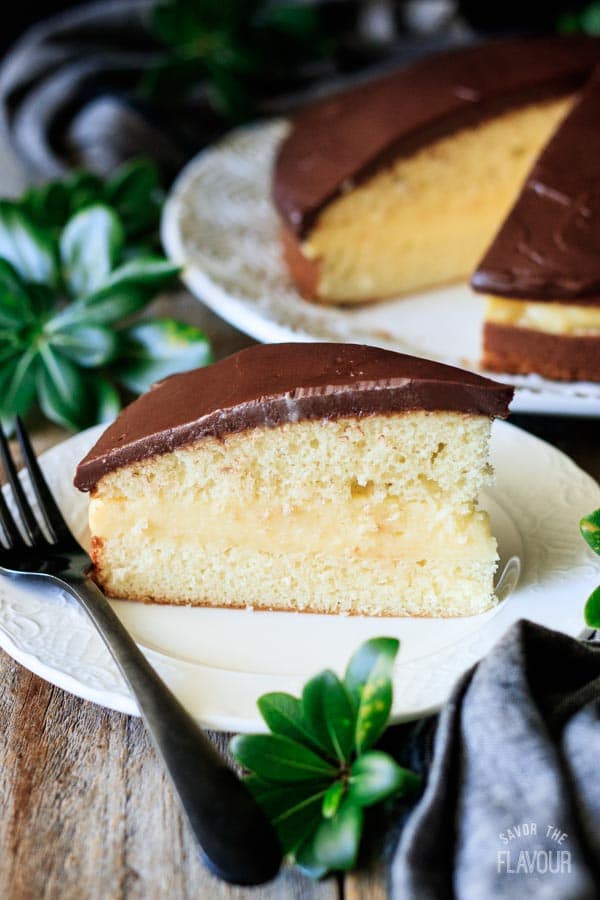 Does Boston cream pie need to be refrigerated?

Yes, it does need to be refrigerated, because it contains a custard filling and chocolate ganache.  Keep it at room temperature for no more than 2 hours before refrigerating.

Can it be frozen?

Yes, you can freeze it as long as you don't use cornstarch in the filling.  Use flour to thicken it instead, as cornstarch can make the filling runny when it's defrosted.  Defrost this dessert in the fridge overnight, then take it out of the fridge an hour before eating.

Gather the ingredients, making sure they are at room temperature. 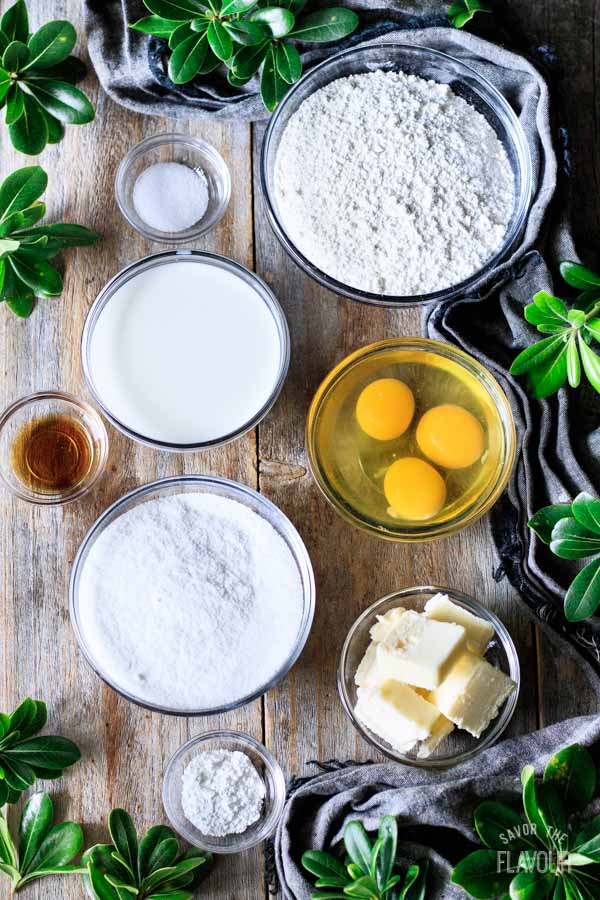 Sift the flour, baking powder, and salt and whisk until combined. 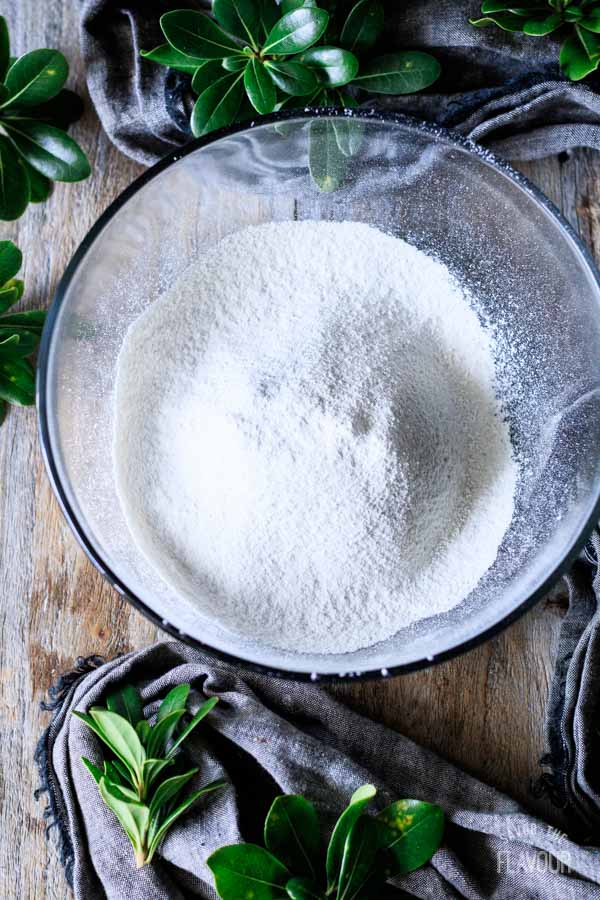 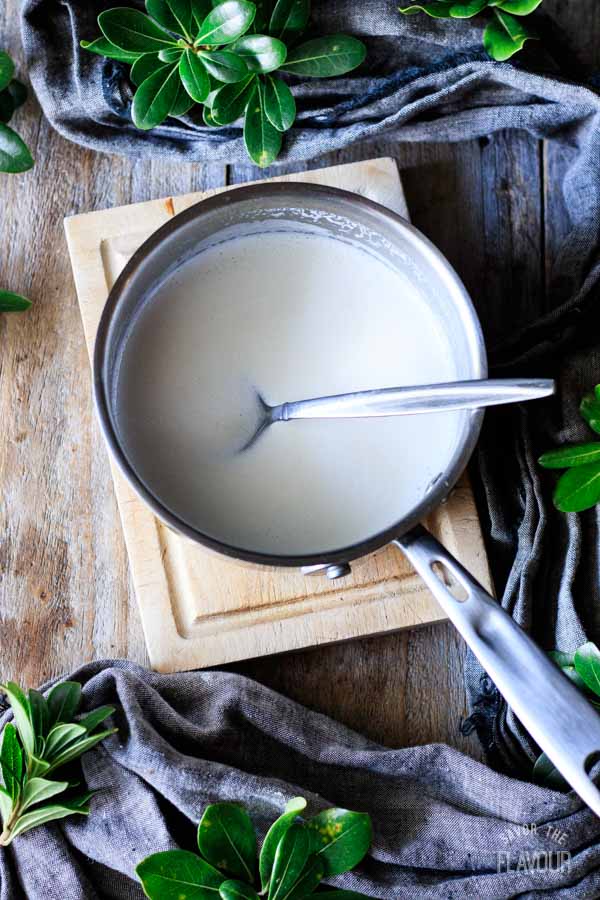 Whisk the eggs and sugar together on medium-high speed until pale and fluffy.  The mixture should leave trails that hold their shape for a few seconds before sinking back into the batter. 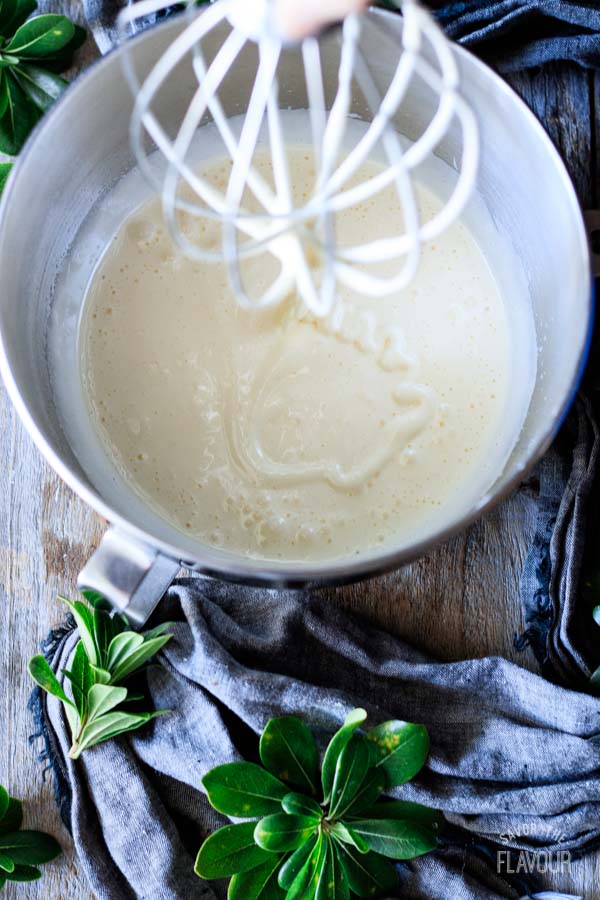 Fold in the flour mixture gently with a silicone spatula.  Make sure that there are no hidden pockets of flour in the mixture. 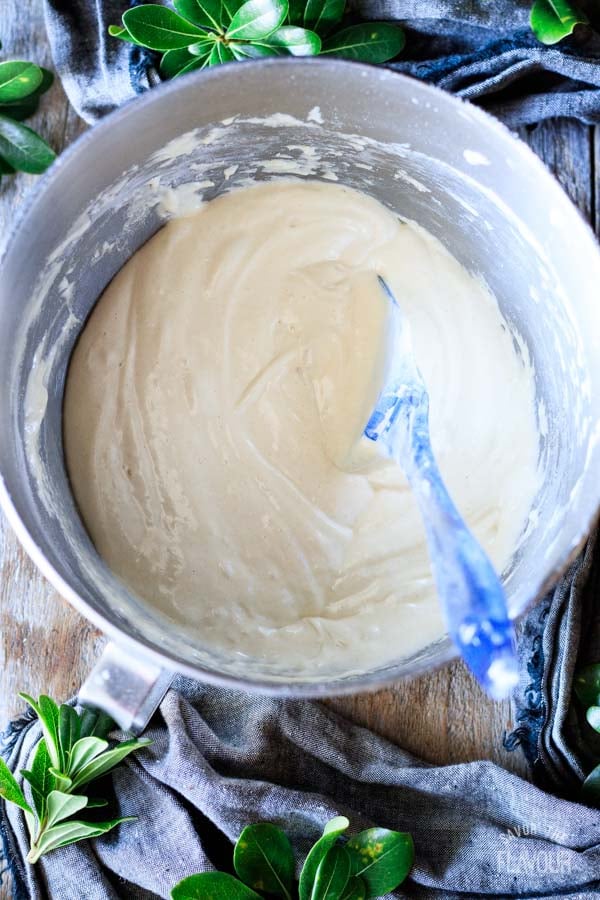 Turn the mixer on low speed and trickle in the hot milk and butter mixture.  Mix with the whisk attachment until evenly blended, but be careful not to mix too long. 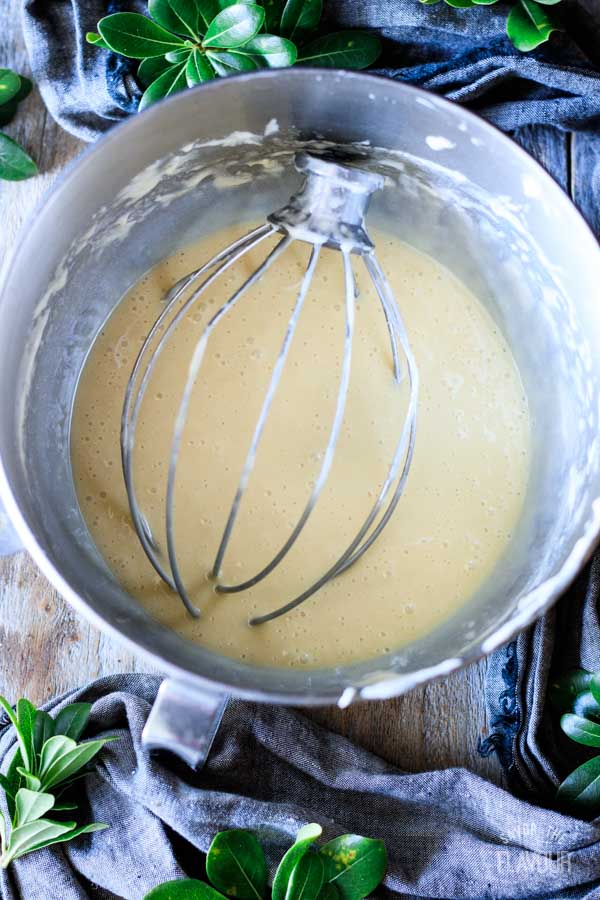 Gently pour the batter into a 9-inch springform pan that has its base lined with parchment paper. 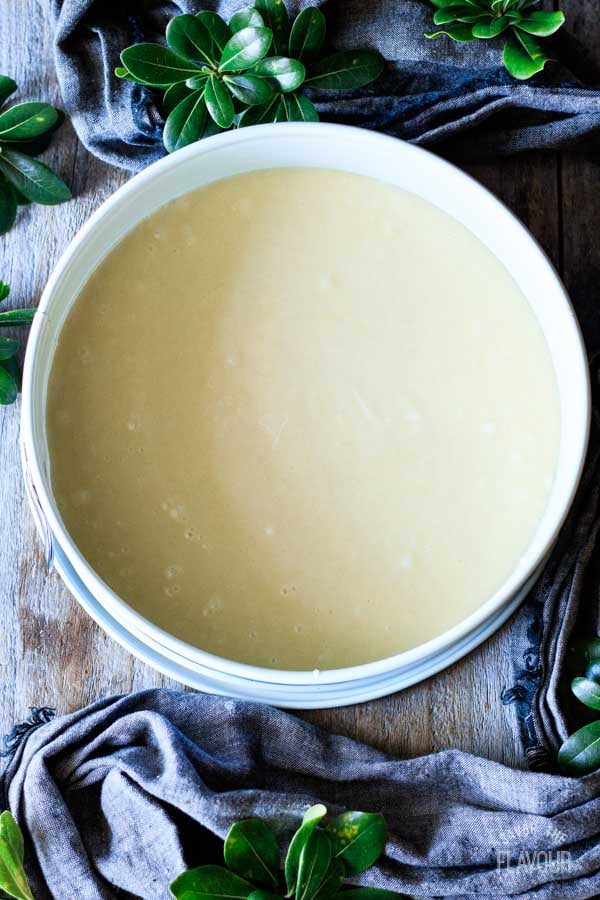 Bake at 350 F for 30 minutes, until it is golden and a toothpick inserted in the center comes out clean. 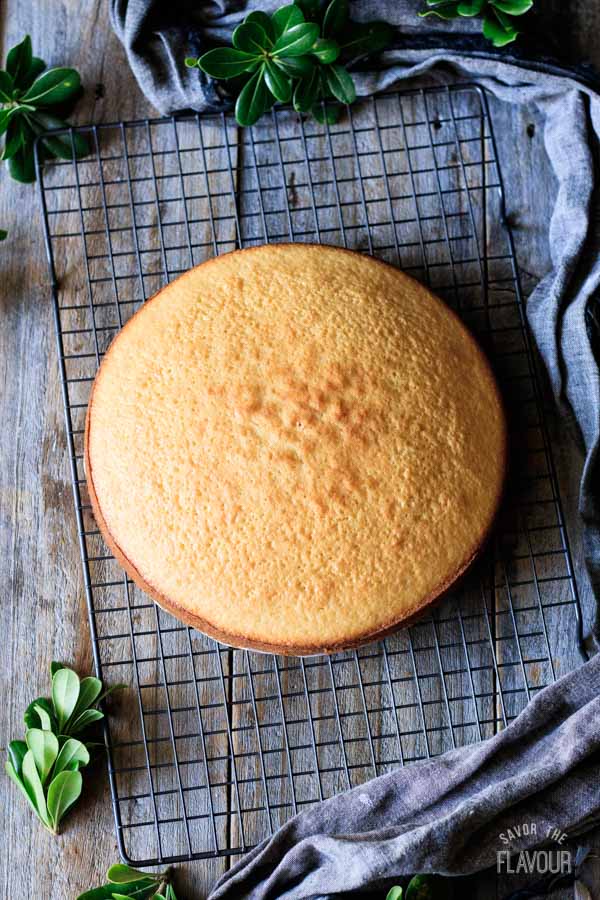 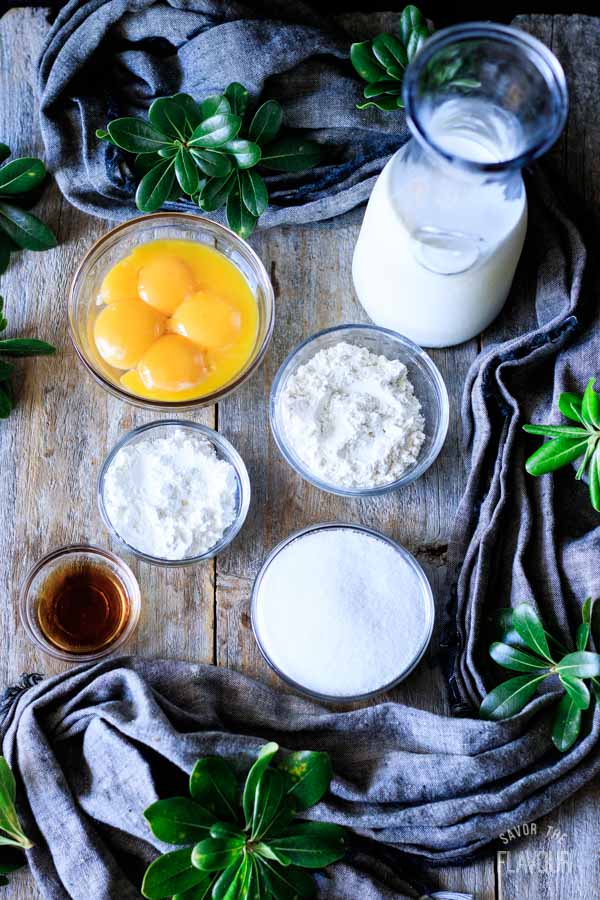 Heat the milk in a heavy-bottomed saucepan until just barely simmering.  While the milk's getting hot, whisk the egg yolks and sugar until they're pale and thick. 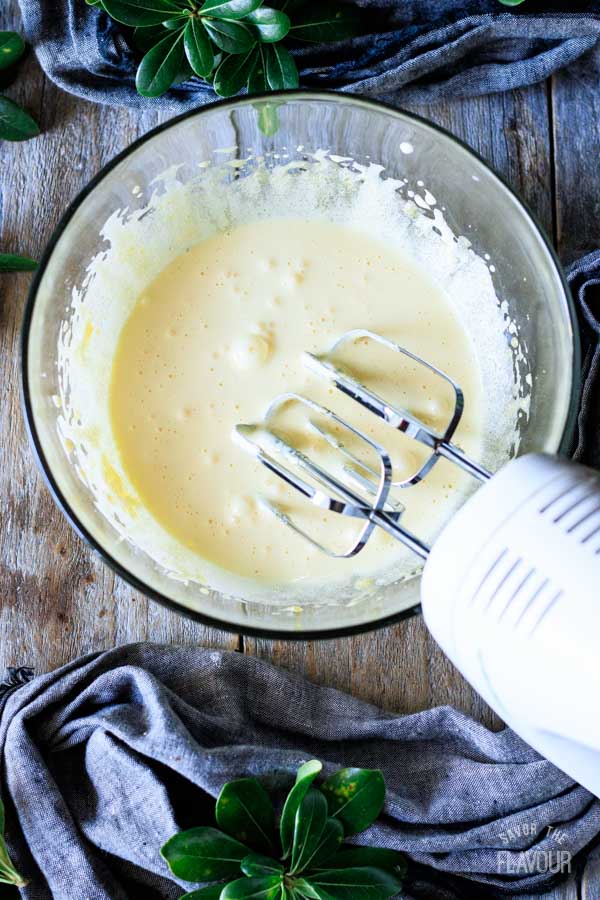 Dump in the flour and cornstarch and whisk again until blended. 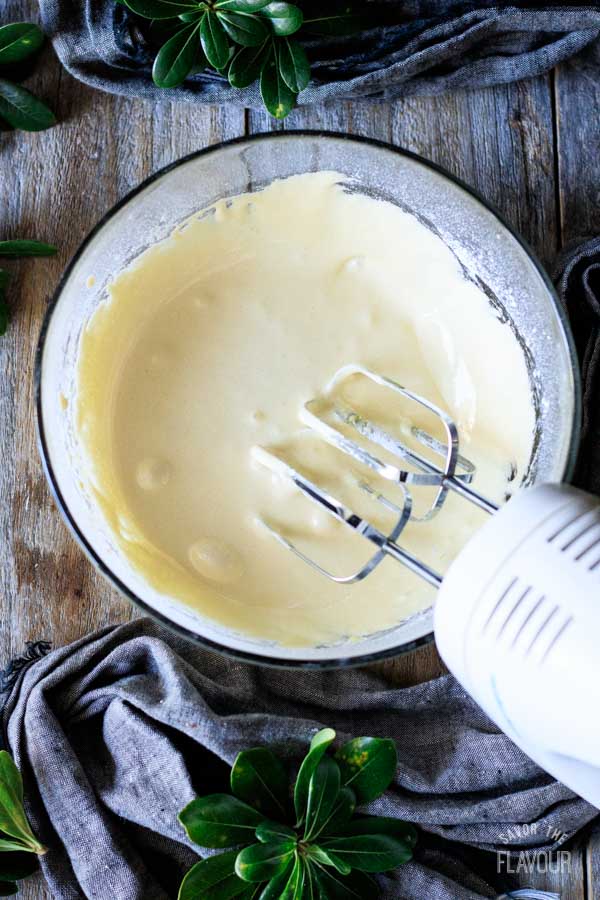 Slowly pour the hot milk into the egg mixture, whisking constantly, then pour the filling back into the saucepan and bring to a boil over medium heat.  Whisk constantly until the custard has thickened. 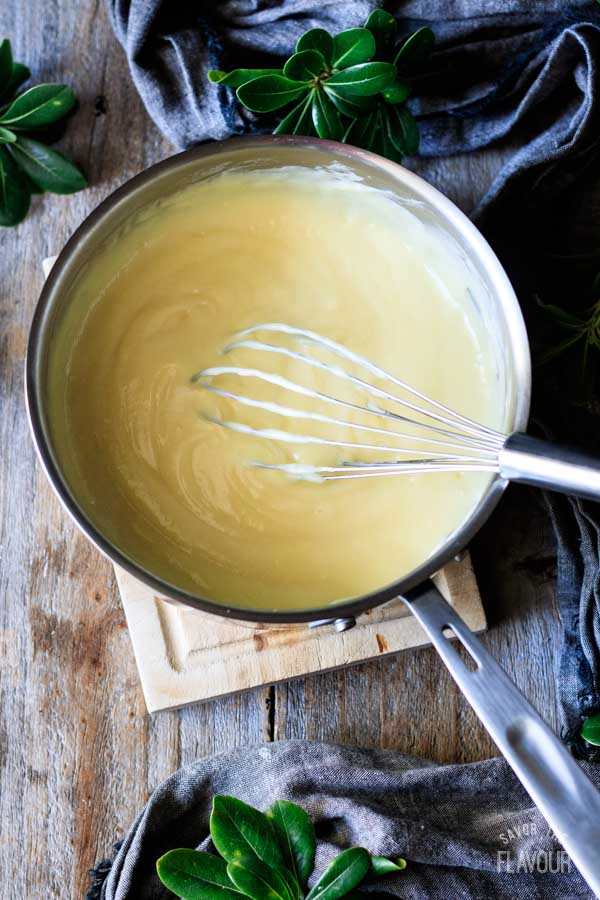 Pour the custard through a sieve to remove any lumps, then press a piece of plastic wrap onto the surface of the custard to prevent a skin from forming.  Chill the custard in the fridge until you're ready to use it. 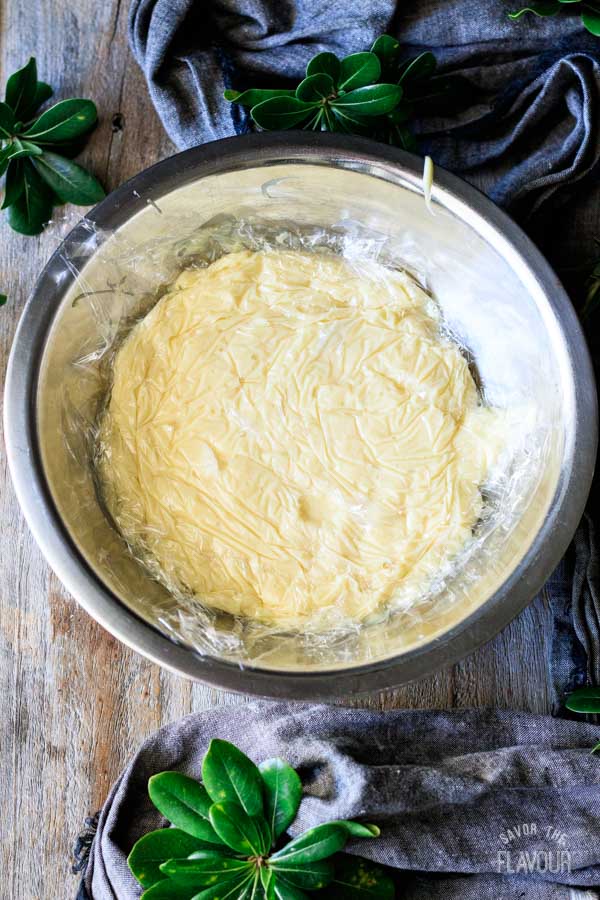 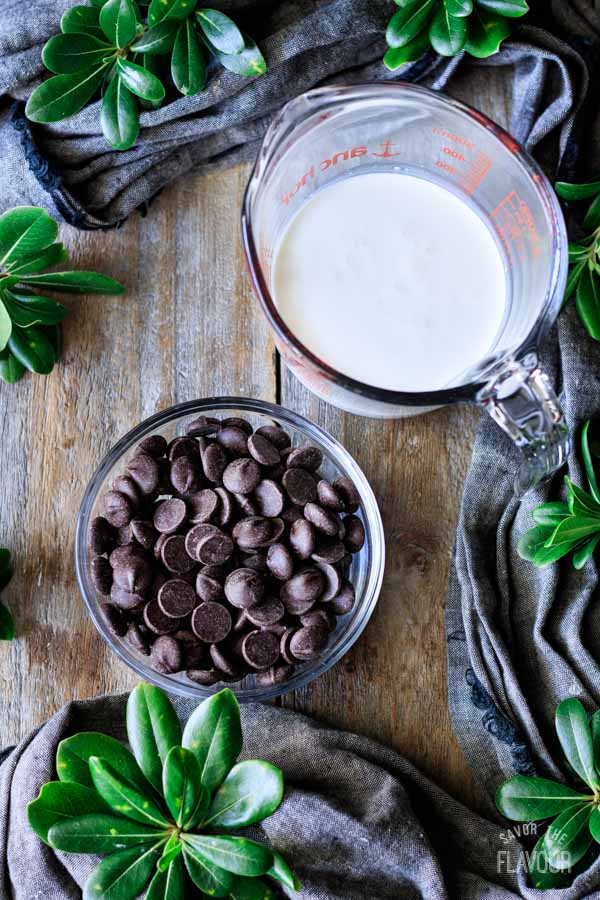 Heat the cream over medium heat until it's just barely simmering, then remove it from the heat and whisk in the chocolate chips until smooth.

Pour the ganache into a bowl and let it chill in the fridge until ready to use, stirring occasionally.  This allows the ganache to thicken, making it easier to decorate. 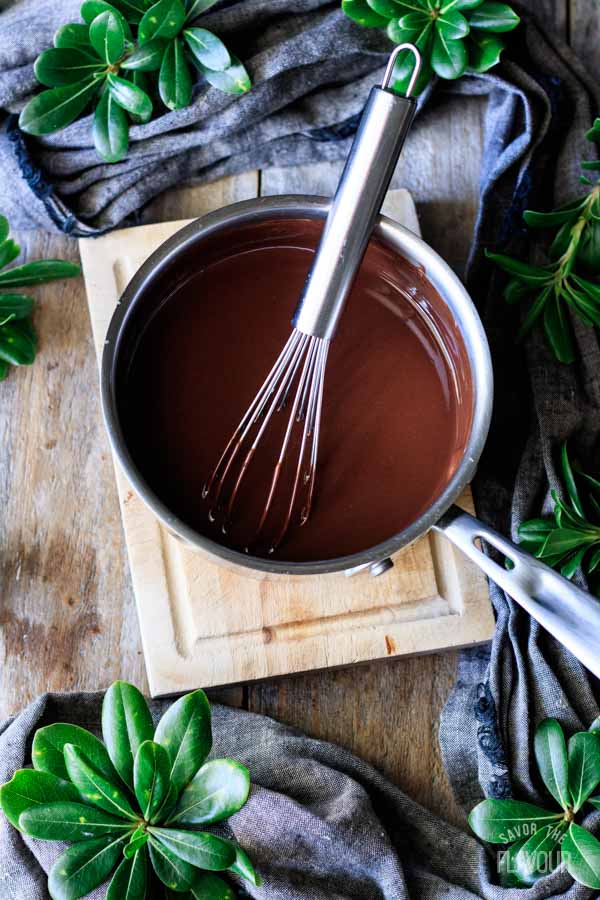 Once the cake has cooled, peel off the parchment paper and split it in half with a serrated knife. 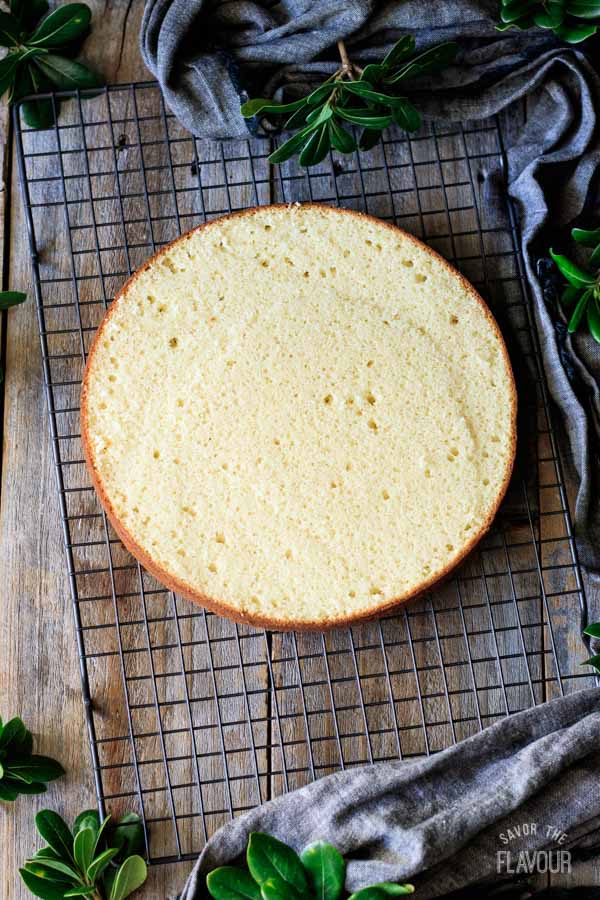 Spread the vanilla custard filling on the bottom layer. 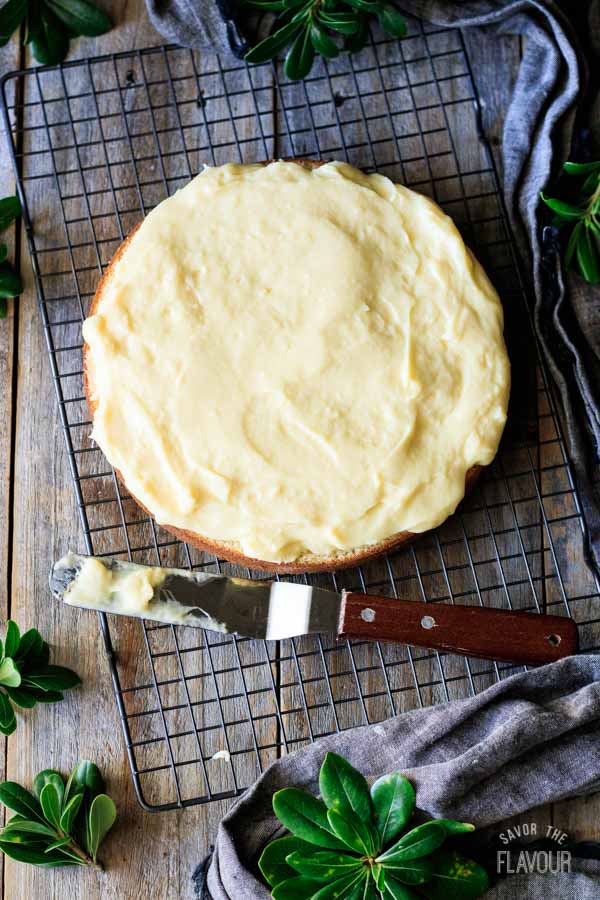 Top with the other layer. 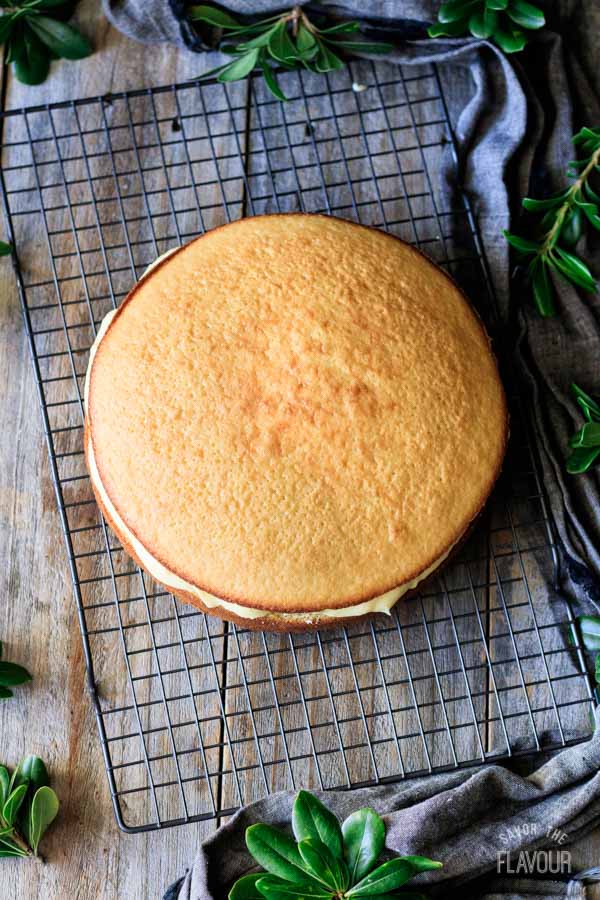 Spread the thickened chocolate ganache on top, making sure to get right to the edge.  Let it drip down the sides a little if you like. 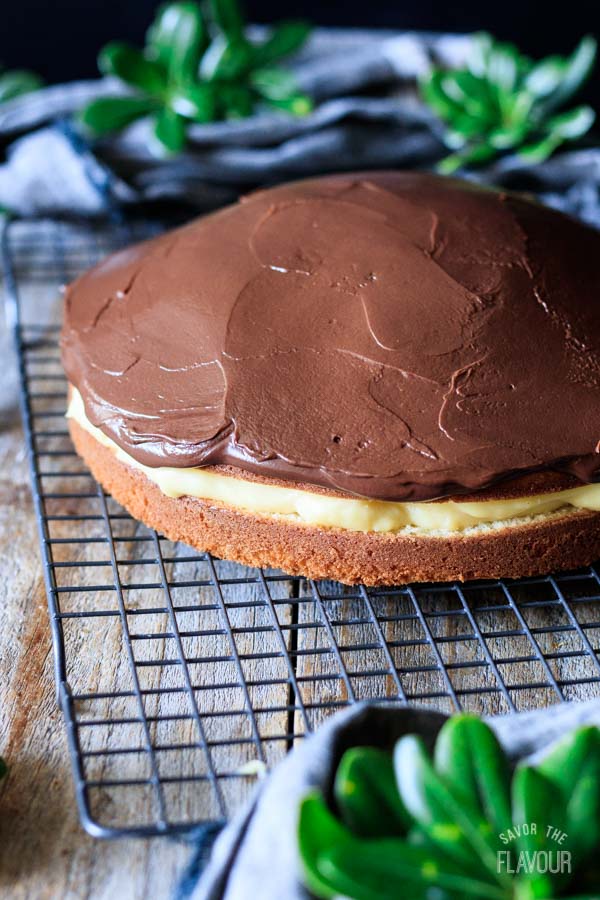 Chill it in the fridge for about 2 hours before slicing, as this will firm up the ganache and filling to make for a neater slice. 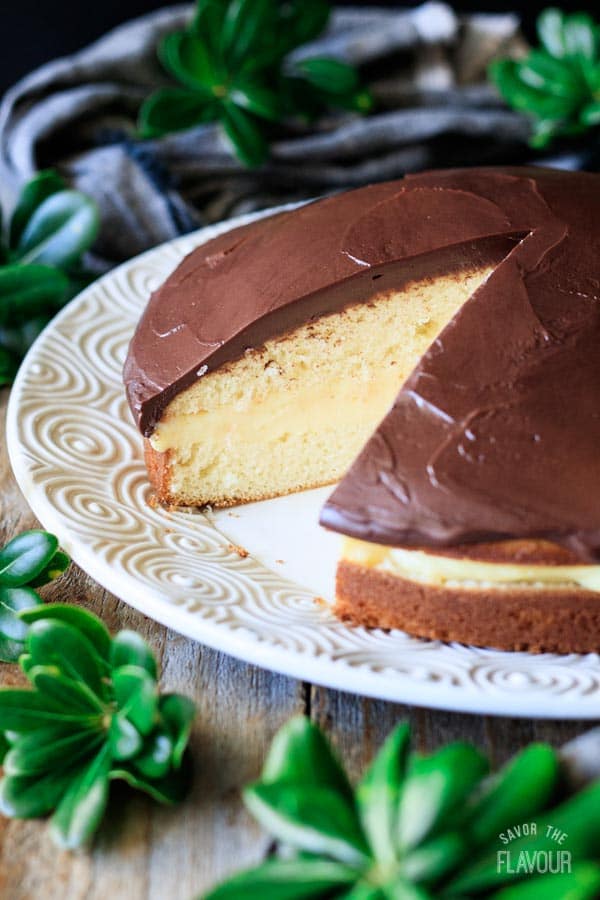 This easy recipe for the best Boston cream pie makes a soft and tender cake, velvety custard filling, and creamy chocolate ganache topping all from scratch.  Check out the step by step photos that break down each simple step.  You’ll definitely want a second slice of this beloved traditional dessert!

For the Cake (from Martha Stewart)

For the Boston Cream Filling

For the Chocolate Ganache

This recipe was originally published on February 15, 2018.

Welcome to our kitchen! We're Brooke & Emma, the mother-daughter team behind Savor the Flavour. As self-taught cooks and bakers, we love to inspire moms to cook from scratch with real food for their families. Increase your kitchen confidence with our tempting recipes, instructional photos, and helpful tips and facts.