Are you disappointed that the much loved carne asada is discontinued from Chipotle Mexican Grill's menu? Try our carne asada copycat recipe. Its rich flavor shines through all the cheese, guac, and salsa you'll pile in your burrito bowl--plus, it's keto and Whole 30 friendly!

Want to make some other proteins from Chipotle's menu? You'll love our copycat steak and carnitas for your home burrito bar.

All of the ingredients for this copycat carne asada recipe are easy to find at your local grocery store if you live in parts of the U.S. where they have a good Mexican food section, like we do in the South. The whole cumin seeds, chipotle peppers in adobo sauce, and the chipotle chili powder are the only ingredients you may need to order online.

What are the nutrition facts for carne asada?

What cut of meat does Chipotle use for carne asada?

Generally speaking, the most popular choices for carne asada are skirt and flank steak. Skirt steak is thinner and more porous, so it absorbs the marinade better and cooks faster.

Is the carne asada spicy?

There are a variety of opinions; some people think it is spicy, while others don't think so. Chipotle's blend of signature spices makes this entree full of flavor. It is meant to have enough punch to stand up to the rice, beans, salsa, and guac that are commonly served with Chipotle burritos and bowls, but we don't find it spicy.

As of the writing of this post, it is off the menu. For the past two years, Chipotle has brought it back in September and taken it off the menu around the end of February. It's considered a limited time offering, but thanks to this copycat recipe, you can make your own whenever the mood strikes.

Gather all the ingredients for the marinade. Peel and smash the garlic. Remove the stems from the cilantro, then rinse the leaves and pat dry. Squeeze the juice from 2 limes.

In a small skillet over medium high heat, heat the 1 tablespoon of oil and saute the smashed garlic for a minute, then add the whole cumin seeds and toast them for a minute while constantly stirring.

In a food processor add the canned chipotle peppers and the other wet ingredients along with the garlic and cumin. Start adding the dry ingredients. Pictured below is the ground coriander, kosher salt and chipotle chili powder.

Next add ½ cup of cilantro leaves. Put the lid on the food processor and blitz for a couple of seconds.

While the food processor is running, slowly pour in the oil. (A little less than ½ a cup.)

Put the skirt steak in a large zip-top bag, squeeze the air out and seal it shut. Gently massage the marinade into the porous skirt steak on both sides. Place it on a cutting board or small baking tray and place in the fridge for 2 to 24 hours. Flip the bag occasionally.

Allow the steak to warm up to room temperature, roughly 30 minutes, before grilling.

You'll want the meat to be medium rare. Check the internal temperature with a meat thermometer so it reads 128F to 130F. Place the steak on a grooved wooden cutting board and tent with foil so the meat can rest for a minimum of 10 minutes.

Thinly slice the skirt steak against the grain and then drizzle on the lime juice and sprinkle on the chopped cilantro.

Serve with other Chipotle sides to make your own burrito bowl. Scroll down to see our many other Chipotle copycat recipes. Pictured below are Fajita veggies and fresh tomato salsa (coming soon). 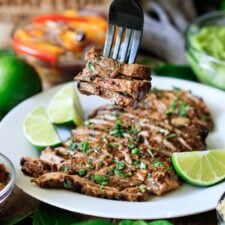 For the Carne Asada