Craving Chipotle tonight, but the closest Mexican Grill is over an hour away?  Just stay in and make your own!  These copycat Chipotle fajita veggies are quick, healthy, and delicious.

What are fajita veggies at Chipotle?

This popular side order consists of green bell peppers, onions, salt, and oregano all mixed with rice bran oil, but we used classic olive oil for our recipe.  Chipotle uses a 3:2 ratio of bell peppers to onions.

No, they're included as an option for extra fillings on your burrito bowl, burrito, taco, salad, etc.

What kind of peppers does Chipotle use?

With only kosher salt and Mexican oregano has spices, this veggie side is very mild.

What other vegetables can I use for fajitas?

Chipotle only uses bell pepper and onion, but feel free to add others to this ingredient list.  Pick other quick-cooking vegetables, like zucchini and mushrooms.

How do you cut veggies for fajitas?

How do you saute veggies for fajitas?

Since this recipe is consists of mostly green bell peppers and red onions, one serving size of ½ cup has 120 calories, 7.1 grams of fat and is also high in fiber and vitamin C.  For more nutritional information, scroll to the end of the recipe card.

Can I make this recipe ahead of time?

It is best to saute the veggies just before you want to serve them, but you can have the green bell peppers and the red onions sliced ahead of time.

How can I store this recipe?

If you happen to have any leftovers, you can place them in an airtight container in the fridge for up to 3 days.  You can also freeze these vegetables in a freezer zip-top bag for up to one month.

What do you serve this recipe with? 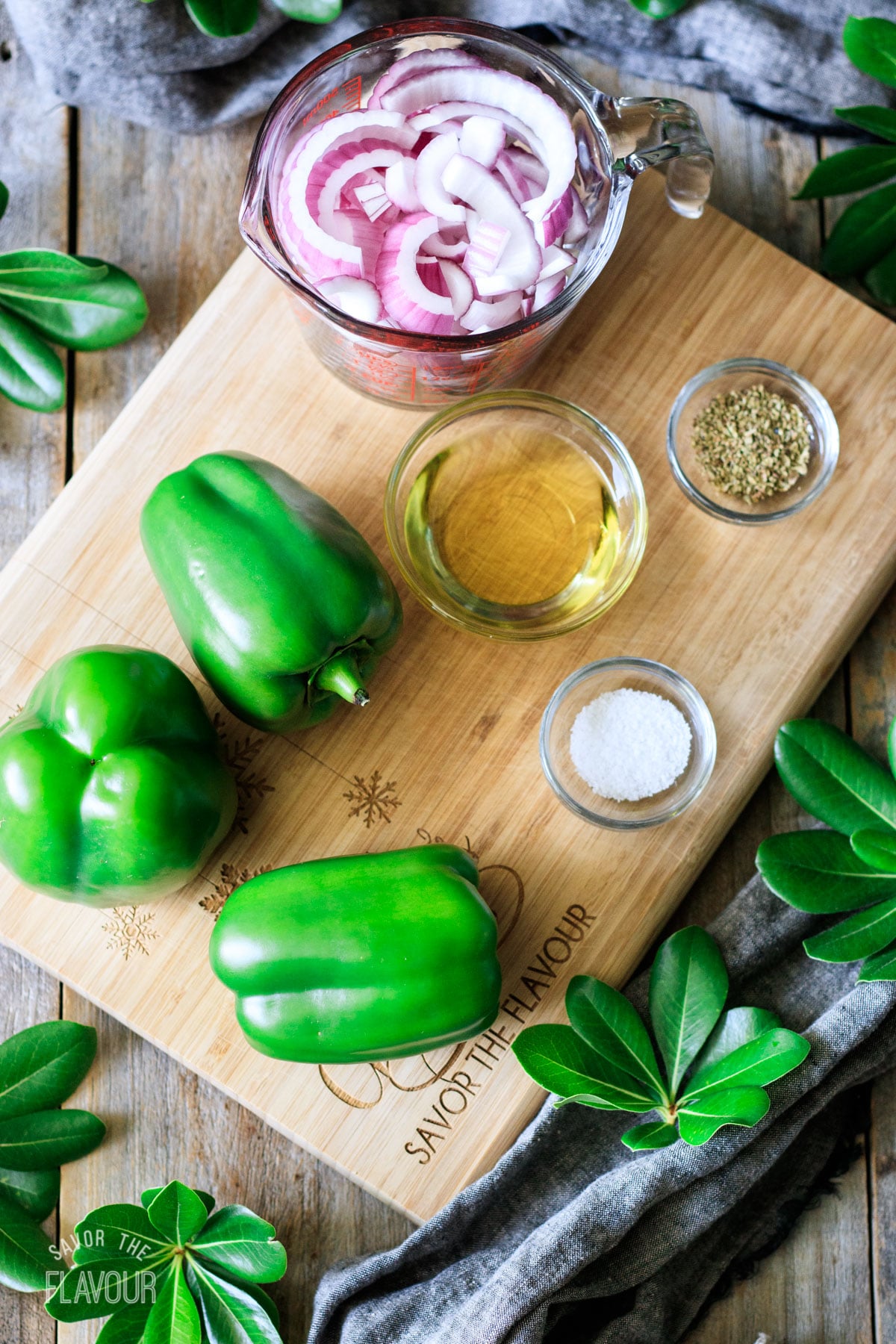 Start by prepping the bell pepper.  Rinse with water and dry them off with a towel, then cut off both ends.

Next, stand the pepper upright and cut it in half from top to bottom. 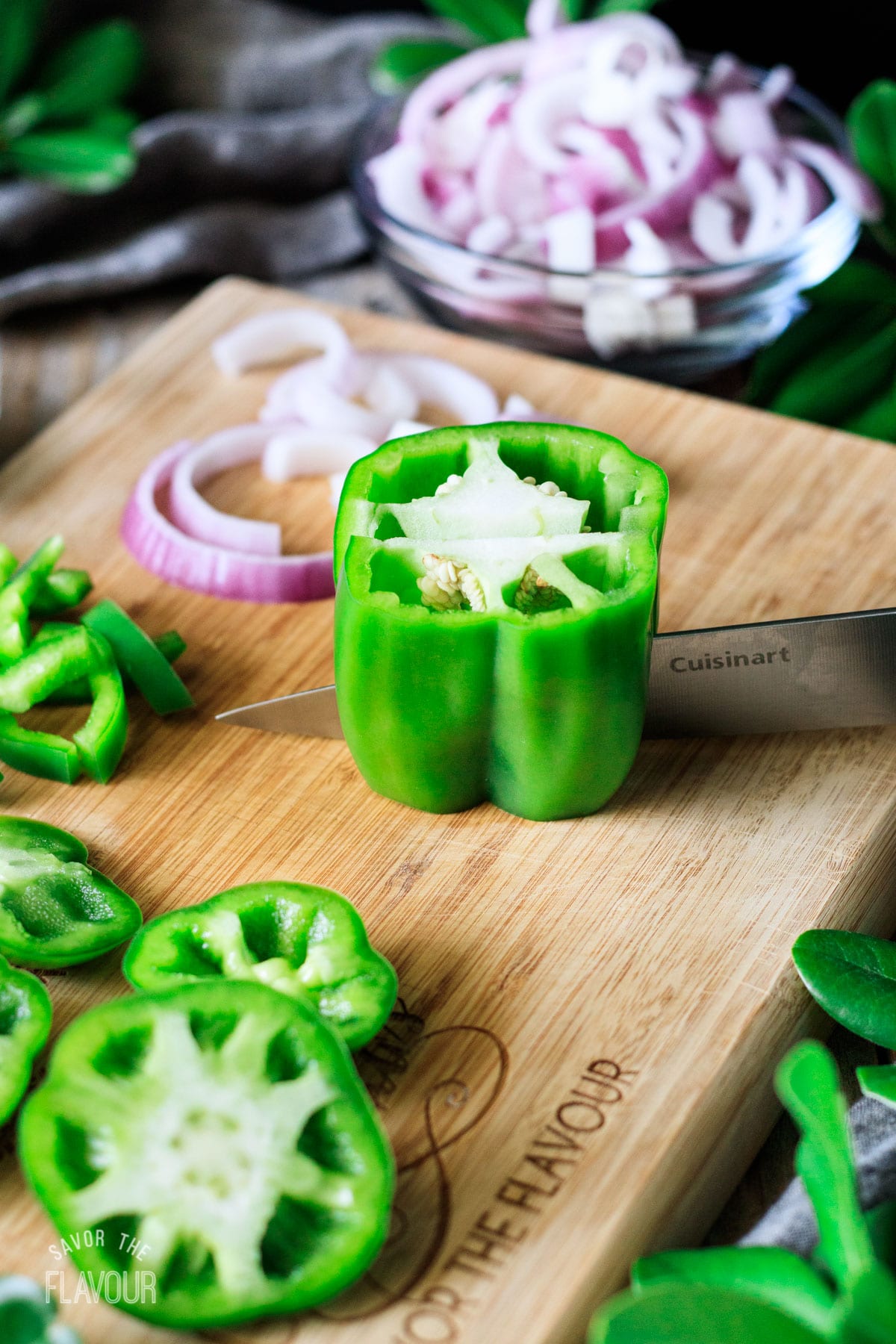 Remove the seeds and membrane.

For ease of cutting, cut the two large pieces into four smaller pieces, then slice.

In a 10 inch skillet over medium high heat, heat up the olive oil or rice bran oil until it's close to smoking. 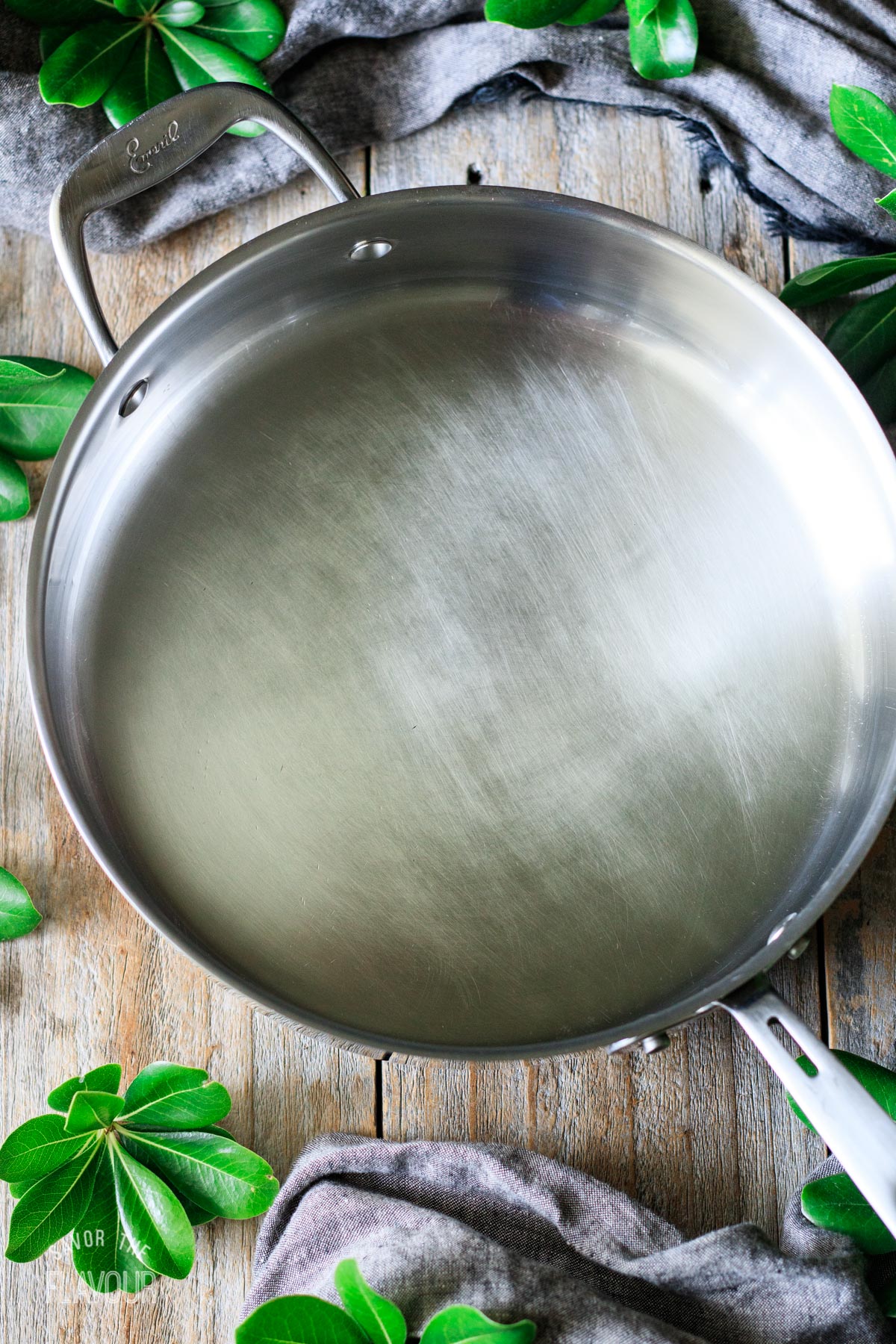 Next, add the sliced red onion.

Add enough kosher salt for taste.  Saute for 5 minutes, tossing it around. 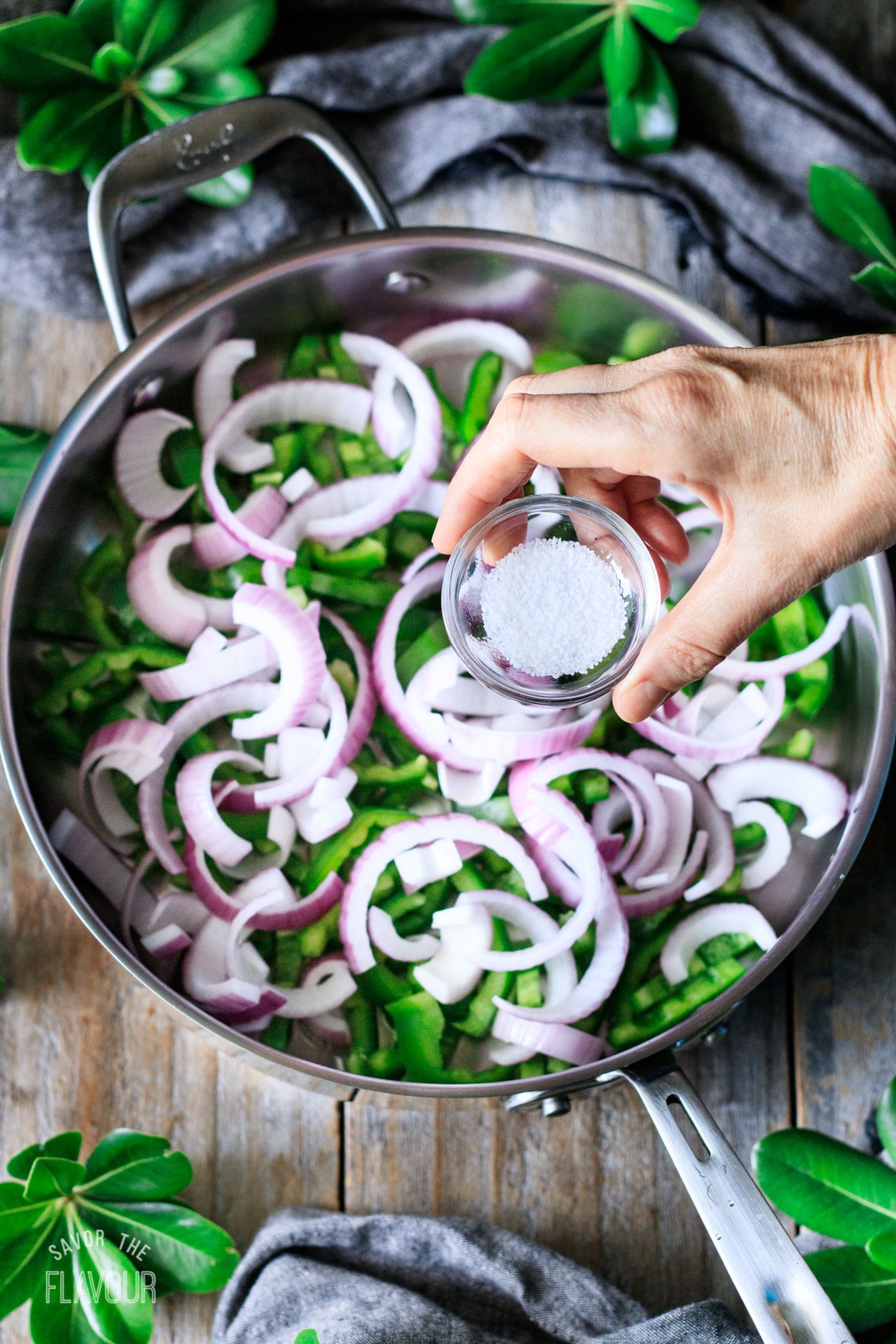 During the last 2 minutes of cooking, add the Mexican oregano. 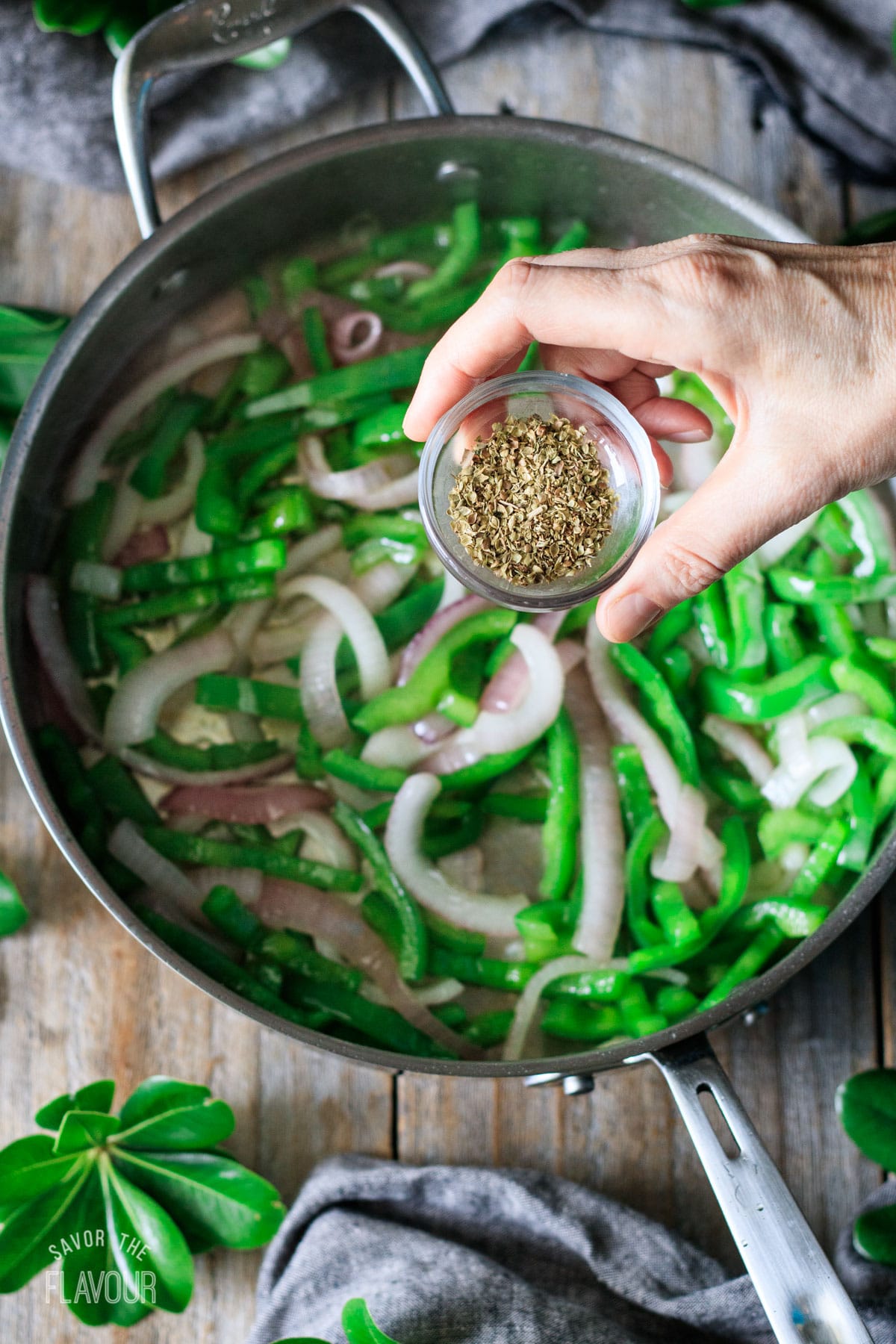 Cook until the veggies are a crisp tender and a bit charred.

Learn how to make copycat Chipotle fajita veggies with our easy recipe.  Sauteed peppers and onions sizzle on the stove to make an easy vegan side dish that is perfect for fajitas, burrito bowls, and tacos.  It's healthy, quick, and so simple to make.

Welcome to our kitchen! We're Brooke & Emma, the mother-daughter team behind Savor the Flavour. As self-taught cooks and bakers, we love to inspire moms to cook from scratch with real food for their families. Increase your kitchen confidence with our tempting recipes, instructional photos, and helpful tips and facts.