Have you been wanting to make English crumpets for your next breakfast or tea party? Look no further than this easy and delicious recipe; the hardest part is waiting for the batter to rise.

Looking for other teatime treats? You'll definitely want to try this English bloomer bread and this cob loaf.

English crumpets most likely originated in Wales.  These English cakes are baked on griddles and were popular because they didn't require an oven.  The griddle was a flat piece of iron set over top of a fire, acting much like a skillet on a modern stovetop.

The signature nooks and crannies of this English bread come from the fermenting yeast in the crumpet batter which produces little bubbles of gas.  When the batter hits the hot pan, the heat encourages the bubbles to rise to the top of the crumpet, creating the holes.

The ingredients to make English crumpets are simple and you might already have most on hand. Let's talk about some of the key ingredients.

Gather the ingredients for our English crumpets.

3. Let the dough prove until it increases in size and starts to fall back on itself.  This will take at least 1 to 1 ½ hours.  You can really see the strings of gluten in the dough in the photo below!

5. Cover the batter and let it stand for about 20 minutes, until it has risen and has a bubbly surface.

6. Meanwhile, butter the crumpet rings and pull out a 10-inch cast-iron skillet. Brush the cast iron with olive oil and place over medium heat.  Add the crumpet rings and fill them with 3-4 tablespoons of batter (about halfway full).  Reduce the heat to medium-low and cook until they are full of holes on top, about 7-8 minutes.

Remove the rings with tongs and flip them over to cook the other side.  Cook for 1-2 minutes, until lightly browned.

7. Place the cooked English crumpets on a wire rack, and cover with a tea towel to keep them warm.  Repeat the cooking process with the remaining crumpet batter.

8. Serve our English crumpets with lots of salted butter and any other toppings you'd like.  Honey, marmalade, raspberry jam, chutney, cheese, or ham are all tasty ideas.

Is a crumpet the same as an English muffin?

What is a crumpet?

A crumpet is a thick, yeasted pancake cooked in metal rings inside of a skillet.  They have a spongy, doughy texture and distinctive holes on top, which is perfect for letting melted butter soak into the crumpet.

Do you slice crumpets?

English crumpets are typically eaten whole rather than sliced. But if you want to toast them, we recommend slicing them in half and toasting them under a broiler.

How do the British eat crumpets?

Traditionally they are eaten hot with butter, clotted cream, and jam. Of course, many different flavor combinations can be eaten with them.

Freeze: Seal them tightly in a zip-top freezer bag, pressing out the extra air and freezing for up to 1 month. There's no need to defrost before toasting. 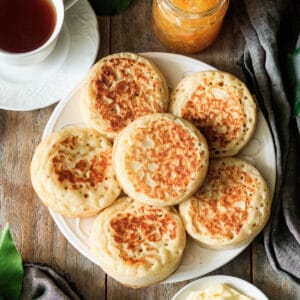 Our English crumpets post was originally published on May 18, 2018.