Reinvent your leftovers into a spectacular meal with our skillet breakfast hash recipe.  Eggs are nestled in a skillet with diced potatoes, bell peppers, red onion, and bacon. It will be a new family favorite!

The beauty of breakfast hash is you can use up whatever is in your fridge or freezer.  Our breakfast hash recipe takes simple ingredients. Let's talk about the main ones.

Gather all the ingredients for our breakfast hash recipe.  Chop the vegetables and grate the cheese.

3. Sauté the onion, bell peppers, and garlic in another pan to save time.

4. Fry the potatoes and the spices in bacon grease until crispy on the outside and soft on the inside, roughly 20 minutes.

5. Preheat the oven to 350°F.  Stir the onion mixture and bacon into the potatoes. Taste and adjust seasonings in your breakfast hash as desired.

6. Make 4 wells in the hash, then gently crack an egg into each well. Sprinkle the grated cheddar cheese around each egg.

7. Bake for 9 to 10 minutes in an oven proof skillet or until the white of the egg is no longer clear.  Garnish with green onion and let set for a few minutes.

8. Serve hot with sliced tomatoes and any topping of your choice (ketchup, salsa, sour cream, or hot sauce).

What is traditionally in hash?

Hash is typically a mixed dish made with potatoes, meat, and sometimes vegetables. Roast beef and corned beef hash are the most popular.

Why is it called a hash?

This tasty breakfast dish of chopped ingredients gets its name from the verb form of hash which means to cut up food into small pieces.

Can I make breakfast hash on a sheet pan?

Preheat the oven to 425 F.  Toss the diced potatoes, chopped veggies, and spices with oil in a bowl. Smooth out the vegetable mixture on a foil-lined baking tray and cook for 25 minutes. Move the veggies to one side and place 4 bacon strips at one end of the tray.  Make four wells in the veggies and crack an egg into each well. Return to oven and cook for 12 minutes. Garnish and serve.

What potatoes are best for breakfast hash?

We prefer making our hash recipe with russet potatoes, an all-purpose potato, that cooks up nicely and maintains its shape. Red-skinned potatoes, Yukon golds, and sweet potatoes are also great options.

Make ahead: This recipe tastes best for breakfast when the eggs are fresh, so if you'd like to make this the night before, make the recipe up through step 5 and then finish steps 6 to 8 in the morning. 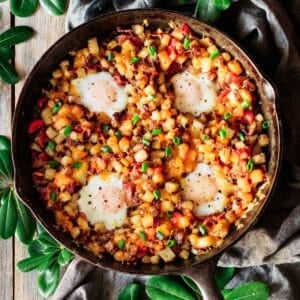 Our breakfast hash recipe was originally posted on Feb. 15, 2019.

Bring Us Some Figgy Pudding!