Boxty, classic Irish potato pancakes are delightful for breakfast or supper. They are easy to make and are very satisfying on a cold autumn or winter day.

If you love traditional Irish recipes, make sure you check out our recipes for boxty bread and colcannon.

You might be wondering what boxty is. Boxty pancake is a traditional Irish breakfast item that has stood the test of time. Basically, it is a potato pancake that is made from both mashed potatoes and grated potatoes.  This pancake is cooked in fat on the griddle or in a cast iron skillet.

It is economical, and will fill you up if you're hungry, but the best part is the taste. We think it tastes similar to the filling of pierogi. If you like hash browns or traditional pancakes, you'll be a fan of boxty.

There is an old Irish nursery rhyme that goes, "Boxty on the griddle, boxty on the pan.  If you can't make boxty, you'll never get a man."  I like to think of it as the Irish's version of "Pat-a-cake, pat-a-cake baker's man, bake me a cake as fast as you can."

If there is any truth to that old saying, it must be quite a tasty dish if many Irishmen want to eat it.

Boxty is made from ingredients that most Irish people would have in their pantry or fridge.  All the ingredients are low cost and easy to find at a grocery store. Let's talk about the key ingredients.

Not Pictured: Boil 3 potatoes in salted water with their skins on until fork tender.  Cool 10 minutes and remove the skins then mash.  Cover and cool in fridge for a minimum of 3 hours or use leftover mashed potatoes.

3. Place the cooled mashed potatoes and the grated potatoes in a large bowl.  Mix together with your hands, then add the flour, baking soda, salt, sugar, and bacon grease and mix again.

4. Add buttermilk until the batter reaches the consistency you want.  Use 1 ½ cups for a thick batter, or more for a thin batter. Pictured below is a thick batter.

6. Over medium high heat, melt the fat in a cast iron skillet and heat until shimmering.  Add the batter, using a spoon to spread it out.  Lower the heat to medium low and cook each boxty pancake for 4 minutes on each side for a ¼ inch thick pancake.  (Use a shorter cooking time for a thinner crepe.)

7. Keep the pancakes warm in a 180°F oven while you cook the rest of the batter.

8. Serve the boxty with while still crispy and warm with the toppings and sides of your choice.

What is Irish boxty made of?

Potatoes are the main ingredient. Boxty is a regional dish in Ireland, so there are many different recipes. Most recipes call for grated and mashed potatoes, but some only use the grated potato. Some traditional recipes call for reserving the starch which acts as a binder, and other recipes use melted butter or egg as the binder. Flour, baking soda, salt, and some sort of milk is also added.

What is the difference between boxty and potato bread?

When should you eat boxty?

Traditionally, it was eaten on October 31, when the potato crop was plentiful, but it was also eaten throughout the fall and winter months. It is very satisfying on a cold, dreary day.

Boxty was invented by the Irish peasants back in the 1700's as another inventive way to use potatoes with ingredients they already had in their pantries. Potatoes were relied upon by many of the Irish to help them survive.

Check out these fantastic Irish recipes.

If you liked this Irish potato pancake recipe and found it helpful, give it some love by sharing! 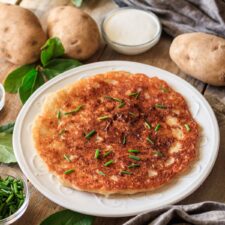 This post was originally published on March 8, 2018 and was republished on February 18, 2022 with new photos and updated content.