Are you looking to try an Irish dish to celebrate St. Patrick's day?  This Dublin coddle recipe or Irish stew takes only a few ingredients, is economical to make, and tastes great the next day.

If you love traditional Irish recipe that will remind you of Dublin, make sure you check out our recipes for boxty potato pancakes and Irish soda bread.

Dublin coddle is an Irish comfort food that you can proudly serve your family for supper on a cool rainy night. It is a hearty dish made with bangers (sausage) and rashers (bacon) along with potatoes and onions. Since it was a dish that was popular with the working class in Dublin, it was made with water (a white coddle).

Now a days, Dublin coddle is also made with oxtail, vegetable, or beef broth (a brown coddle). It is also the stew Dubliners choose to eat when they are feeling under the weather, much like chicken soup for Americans.

This dish can be traced back to the 1700's to the city of Dublin, Ireland. In Irish catholic homes, back when meat wasn't supposed to be eaten on Fridays, it was traditionally served for supper on Thursdays to use up any leftover pork. The Irish housewives would make a up batch of stew earlier in the day and let it coddle, or cook slowly, in the oven for hours.

The rest of Ireland didn't really eat this dish because the bangers and rashers were cheaper and easier to find in the big city. Country folk would opt for Irish stew made with mutton (lamb), as this meat was plentiful there.

This Dublin coddle or Irish stew only has a few ingredients, and most are pantry staples so they're easy to find at your local grocery store. Let's talk about a few of the key ingredients.

3. Use ¼ cup of beef stock and a wooden turner to deglaze the fond from the bottom of the Dutch oven. This step also gives more flavor to the Dublin coddle as it releases the fond.

4. Layer the sliced onions in the pot.

5. Add the cooked bacon and the chopped parsley.

6. Add a layer of browned sausages that have been cut into one inch coins.

7. Finish it off with a layer of peeled and coarsely chopped potatoes, a sprinkle of parsley, and a few grinds of fresh black pepper. Pour in the beef broth.

8. Cover the Dublin coddle with a lid or two layers of foil to get a good seal on the Dutch oven.

9. Bake at 450°F for 40 minutes covered, then uncover the Dublin coddle and bake for 25 minutes or until brown on top.  If you want, add a few pats of butter for the last 25 minutes of baking.

What does coddle mean in Irish?

The Irish got the word coddle from the French verb caudle, which means to gently boil, parboil, or stew. It is used in reference to cooking this favorite comfort food, which is enjoyed by many Dubliners on a cold, damp evening.

Irish sausages are made with eggs, rusk (breadcrumbs), pork (sometimes beef and lamb), and seasoned with spices and garlic. They are light in color and are juicy once cooked. During WW1, the sausages were made with little meat, mostly scraps and water. When the housewives would fry up the sausages, they would sizzle and make banging sounds. The word bangers was coined and the term stuck.

What's the difference between coddle and stew?

Coddle is an Irish stew that is popular in Dublin and surrounding areas in Ireland. In this dish, the food is placed in layers: potatoes, bangers (sausage), onion, and rashers (bacon) in a large pot and is slowly cooked. A stew is more like a thick soup that is slowly simmered. It can contain meat, root vegetables, broth, and spices.

Dublin coddle is traditionally served with Irish soda bread or Irish brown bread to help soak up the broth from the stew.  It is a hearty meal all by itself, but if you want to serve something else, a green salad or our Irish pub salad would round out the meal nicely. 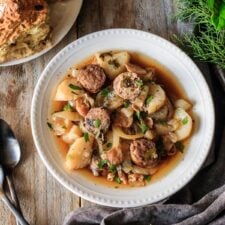