Don't you just love fresh summer corn?  Pick up some fresh cobs and use them to make our easy, creamy, and healthy potato corn chowder recipe.

If you love soups with vegetables, we think you'll enjoy our 10 Vegetable Soup and our Broccoli Stilton Soup.

Our potato corn chowder takes pantry staples that are easy to find. Let's talk about the key ingredients.

Gather all your ingredients for our potato corn chowder: vegetables, spices, liquids, flour, and butter.

In a Dutch oven over medium-high heat, melt the butter then saute the celery and onion until soft then add the garlic and cook for a minute.

Cut the kernels off the cob with a large knife.  For ease of clean up, place a small bowl inside of a larger one.

Stand the cob upright and cut the kernels off working from the top of the cob.

Place the kernels in the soup pot, turn the heat down to medium and sprinkle on some salt then cook for 20 minutes, stirring occasionally.

Turn up the heat to medium-high, sprinkle on the flour and cook for a minute while stirring.

Slowly whisk in the chicken stock and add in the cubed potatoes, bay leaves, black pepper, and one cob.  Cover and bring the potato chowder to a boil for 7 minutes then simmer until the potatoes are soft.  Taste and adjust any seasonings.

Remove the Dutch oven from the heat, pour in the heavy cream, and stir.  Remove the bay leaves and garnish them with fresh thyme leaves or fresh chives.

We encourage you to try our potato corn chowder recipe when fresh summer corn is in abundance.  Serve it with homemade jalapeño cornbread that is fresh from the oven.

How do you thicken chowder?

There are three methods used to thicken chowder. One, whisk flour into a small bowl of broth before putting it in the soup pot.  This will help prevent clumping and will help it dissolve evenly into the soup. Second, you can use potatoes.  Boil the potatoes in the chowder for at least 7 minutes.  This will release starch from the potatoes, which will thicken the soup and make it creamier. Last, make a slurry with cornmeal and water by whisking them together in a small bowl, then adding it to the chowder.

What makes a chowder not a soup?

Chowder is at its heart a type of soup but it is distinguished by its thicker texture and richer flavor than most other soups.

Traditionally, chowder starts with butter as the fat, but you can use olive oil or bacon grease. All good chowders start with cooking aromatic vegetables.  The French have a blend of aromatic vegetables (onions, celery, and carrots), which they call mirepoix.  The Creoles have their 'holy trinity,' which consists of onions, celery, and green pepper.

This corn potato chowder gets its flavor base from sauteing onions, celery, and garlic in unsalted butter.  Then fresh thyme leaves are stirred in and cooked for one minute to release more flavor. Then the corn and potatoes are added to finish off the dish.

How do I slice corn kernels off the cob?

Place a small bowl that has a rim on the bottom upside down inside of a larger bowl.  Rest the bottom of a shucked corncob inside of the rim of the small bowl.  Using a sharp chef's knife, slice the kernels off the cob, cutting top to bottom.  The loose kernels should be contained in the larger bowl, reducing the mess.  Rotate the cob and repeat until all the kernels are sliced off the cob. 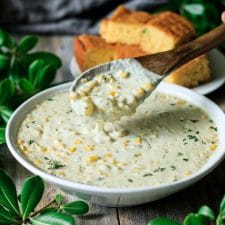 Our potato corn chowder recipe was originally published on June 15, 2018.