Have you ever wondered how to cook a spiral ham?  This recipe will answer your questions and will increase your kitchen confidence by giving you lots of pro tips.  Serve a moist, juicy holiday ham this year for your family's special occasions; it's simple to do. 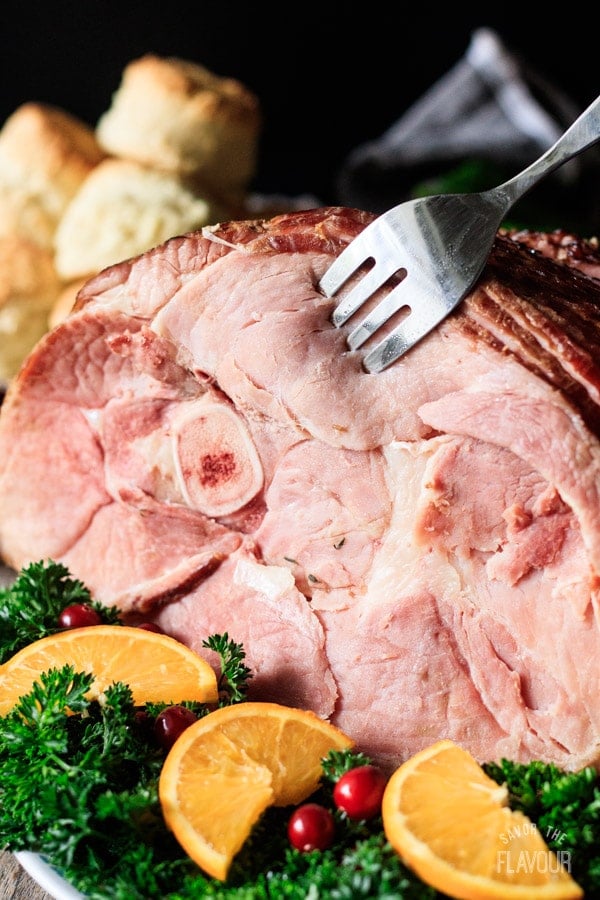 How do I prepare a spiral ham?

How do I keep it from drying out?

How much do I need for 6 adults?

Do you let it rest after cooking?

What ingredients are in a glaze?

How to Make a Glaze

When do you glaze it?

What cooking techniques can I use to get the glaze to caramelize? 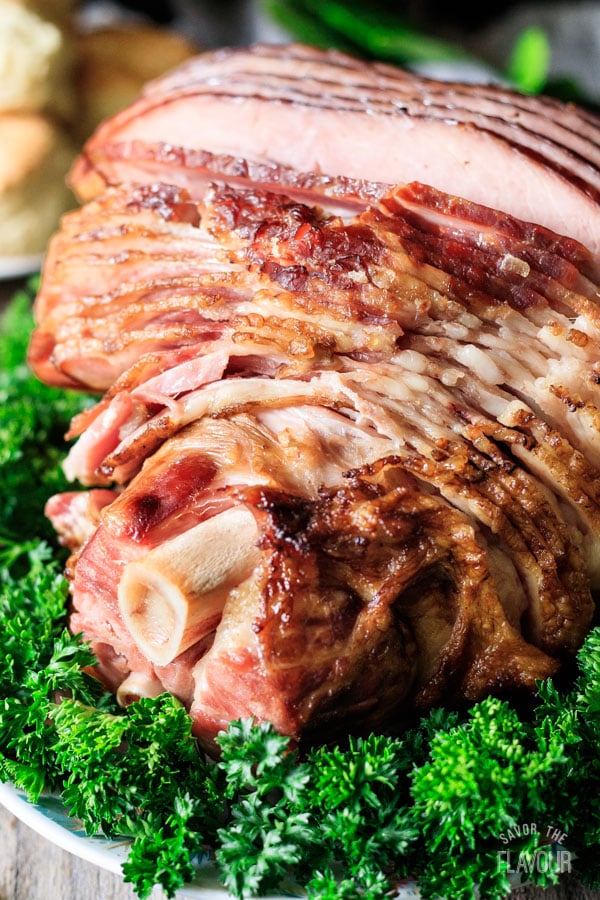 Is bone in ham better than boneless?

How long can a cooked ham sit out?

Can you freeze leftovers?

What can I do with leftovers? 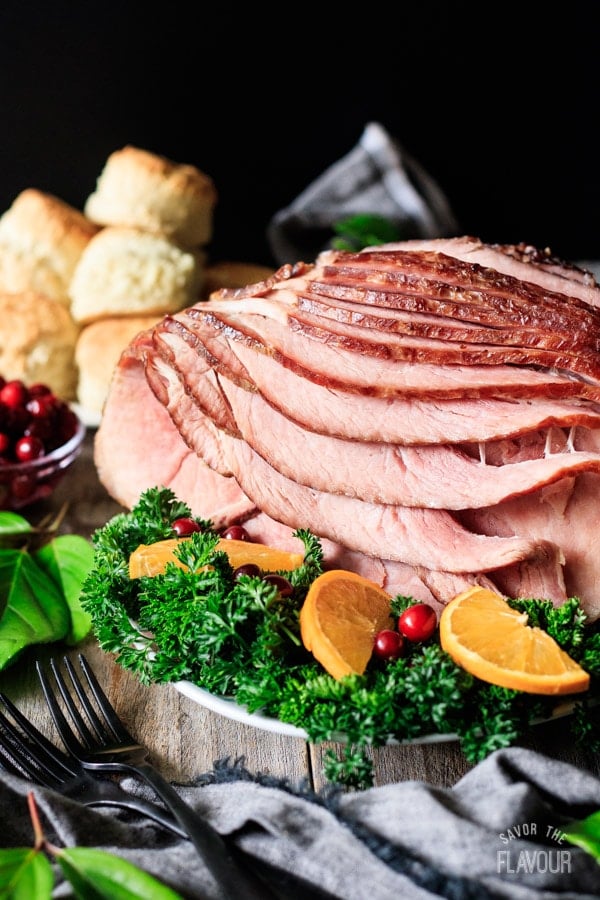 Gather all the ingredients.  Slice the onion and separate it into rings, then peel the garlic cloves. 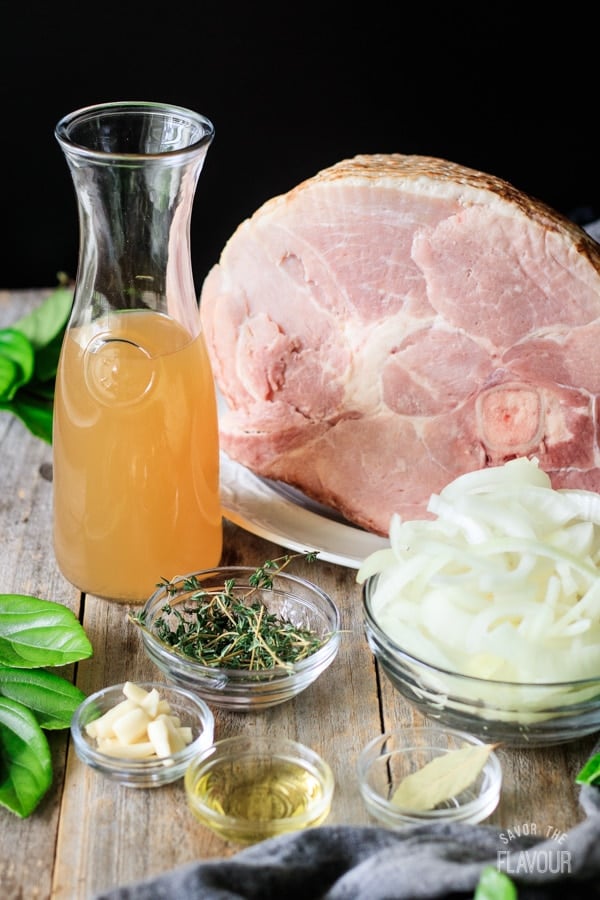 Move the oven rack to the lowest position so the ham will be in the center of the oven.  Preheat the oven to 275 F and remove all packaging from the meat.

Melt the butter in a small skillet over medium high heat.  Saute the sliced onion until soft, then add the garlic cloves and cook for two minutes, stirring constantly. 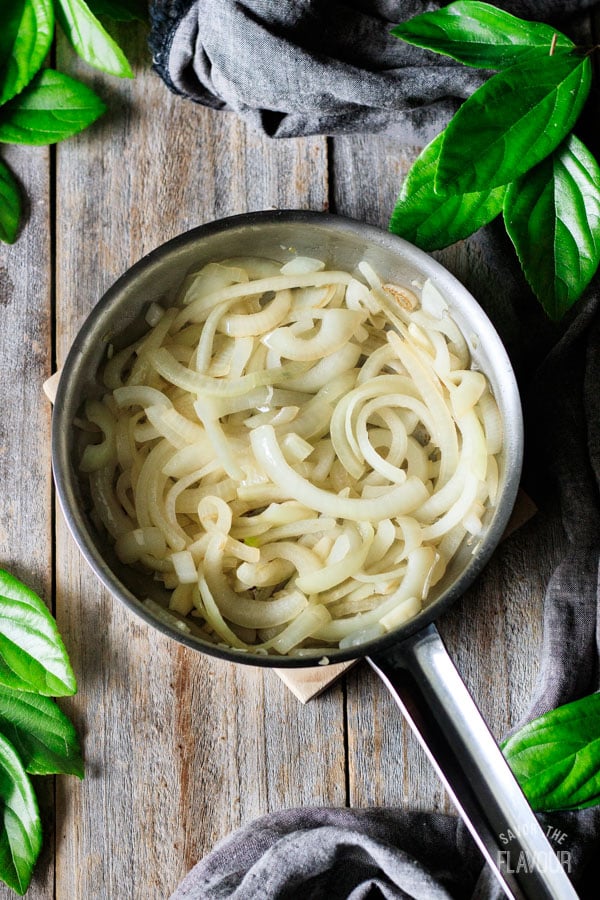 Transfer the onion and garlic cloves to the roasting pan, then add the fresh thyme sprigs and the bay leaf. 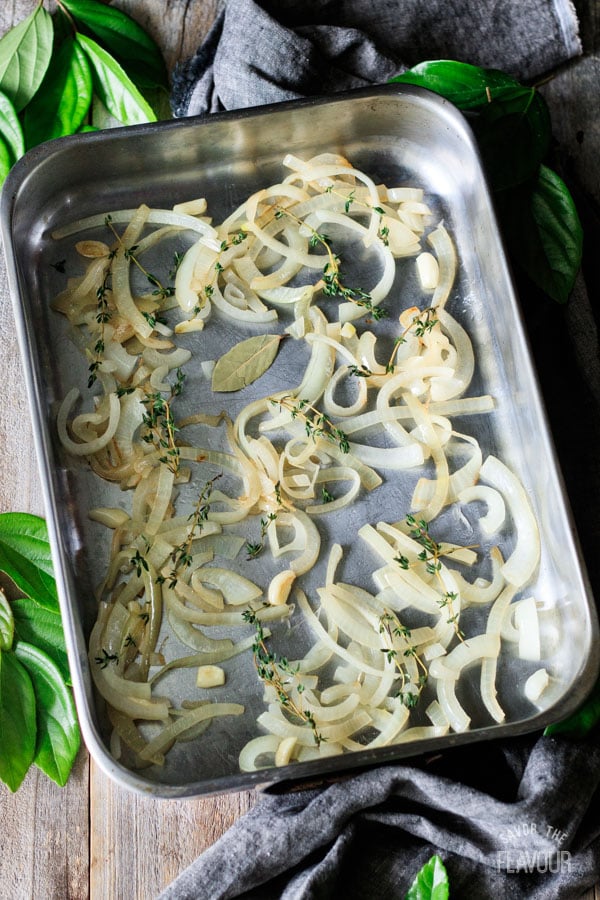 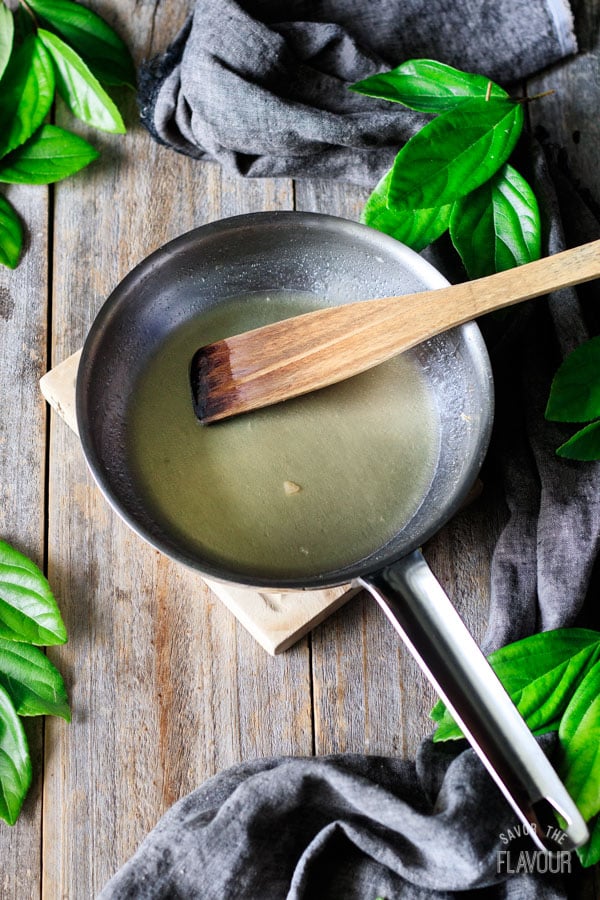 Pour the fond into the roasting pan. 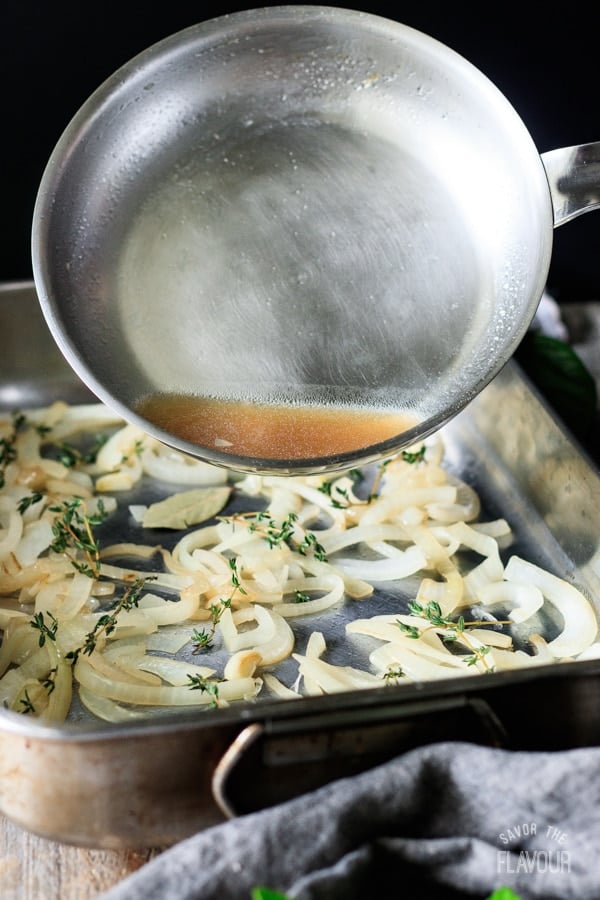 Place the spiral ham in the pan and pour the chicken broth on top. 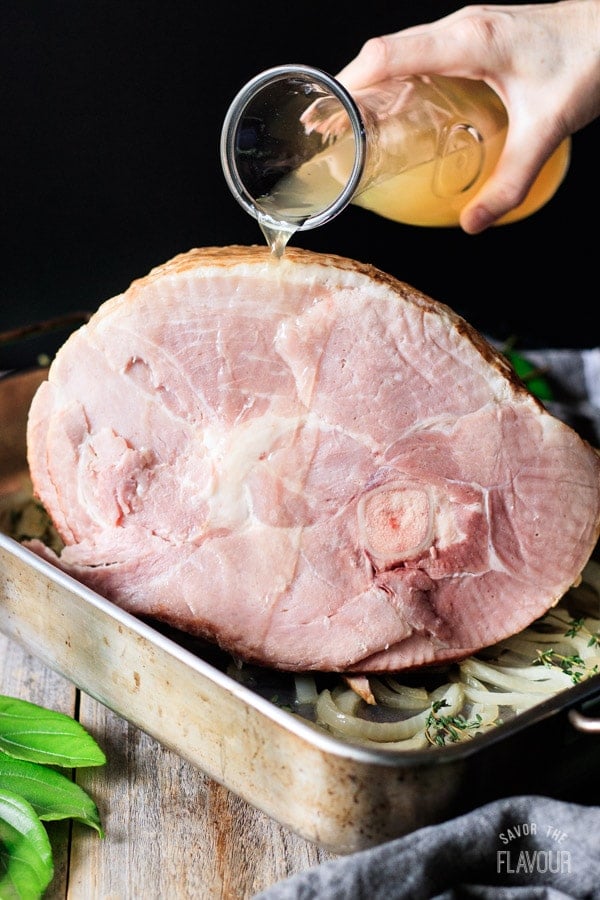 Turn the meat cut side down and cover tightly with foil.  Cook at 275 F for 12 minutes per pound or until a meat thermometer reads 125 to 140 F.  Uncover for the last 30 minutes.

If you want to apply a glaze, increase the temperature to 400F during the last 20 minutes, brush the first glaze all over and in between the slices.  Cook for 10 minutes, then apply the second glaze.  Apply the third glaze, after it's cooked and before it's tented. 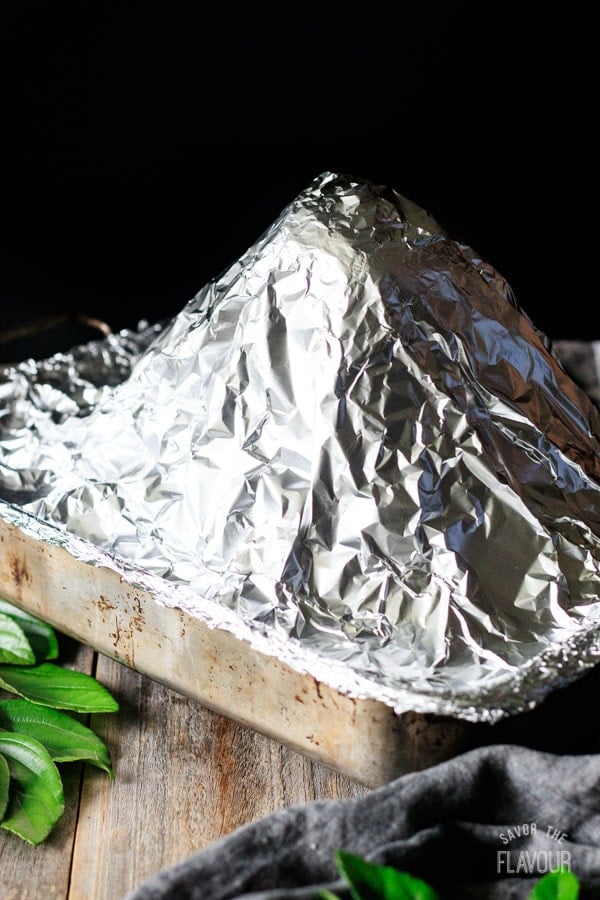 Tent it loosely with foil.  This will allow the internal temperature to increase 5 to 15 degrees and allow the juices to redistribute.

Use a slotted spoon to remove the sliced onion and garlic cloves from the roasting pan.  Place them in a bowl and serve with the ham.  Pour the pan juices into a bowl.  Use the pan juices to baste it after it has rested.  You can also make a pan gravy with the drippings.

Serve the spiral ham with the slices onion and garlic cloves, and a spoonful of pan drippings.  You can also serve it with spiced applesauce, mustard sauce, or gravy. 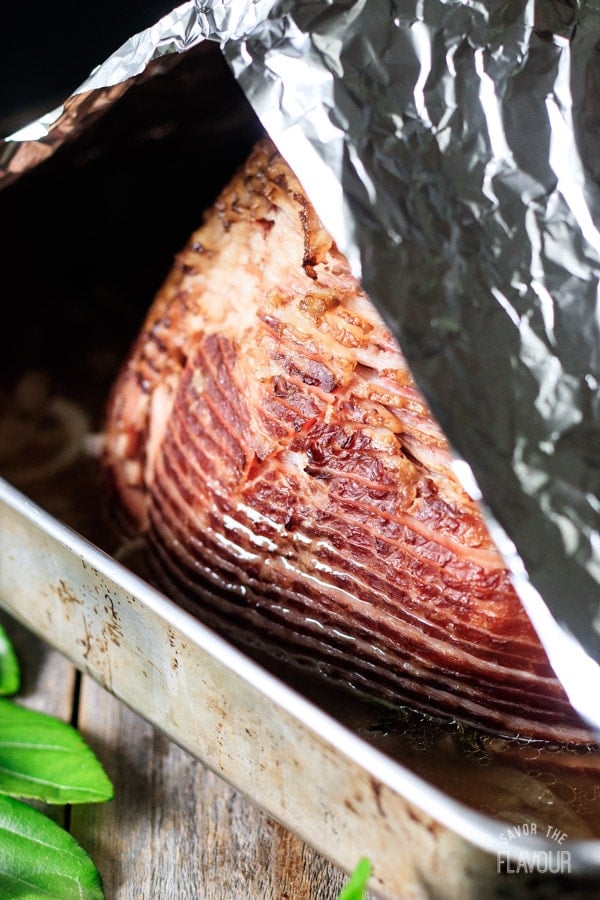 Looking for leftover ham recipes?  Why not try one of these?

How to cook a spiral ham is an easy recipe to bake in the oven for your family's next holiday dinner.  It's a perfect low carb meat for Easter, Christmas, and Thanksgiving.  This savory ham is moist and juicy, and is not sweet.  It's easy to make this crowd favorite with all the pro tips in this recipe!