Are you a fan of Chick-fil-A's drinks?  Our copycat frosted sunrise will spread a little sunshine your way. In a few minutes, you'll be sipping on a creamy frozen treat.

Chick-fil-A uses their vanilla IceDream and Simply Orange juice, which is 100% pure juice.

What is a frosted Sunrise from Chick-Fil-A?

In 2018, the restaurant described it as "a cool treat that is hand-spun with our famous vanilla Icedream and refreshing Simply Orange juice."

Chick-fil-A considers their frosted drinks as a sippable, spoonable sweet treats. They're not smoothies or milkshakes, they are something special in between. They're so delicious, you'll get chills.

What frosted drinks has Chick-fil-A had on their menu?

In the spring of 2015, it started with frosted lemonade. A year later, frosted coffee made it's debut. In the spring of 2017, frosted strawberry lemonade was on the menu during strawberry season. In 2018, frosted key lime was out from March 18 to May 25 which had a special blend of key limes, kaffir limes, and Persian limes.

It is tart and sweet, but not overly indulgent, frozen treat. It is deliciously creamy and similar in texture to a frosted lemonade, but with a different citrus twist.

How many calories are in this drink?

Our copycat recipe has 715 calories per 12-ounce serving. This increase in calories is due to the ice cream we chose, as Chick-fil-A's Icedream has only 140 calories in one cup. For more nutritional information on our copycat recipe, scroll to the end of the recipe card.

Is frosted sunrise still on the menu at Chick-fil-A?

Officially, no; it was a limited time offering in the spring of 2018, but don't give up hope. Since Chick-fil-A always carries both ingredients (orange juice and Icedream), you can ask them to use Simply Orange juice instead of their lemonade in the frosted lemonade. They will charge you for the price of a frosted lemonade.

3. Blend for a few seconds.

4. Squeeze in some juice from four orange wedges, then blend again for a couple of seconds.

6. A frosted sunrise isn't a dessert and isn't a smoothie, but it's definitely a tasty treat and one you won't soon forget. It's a little taste of sunshine. Make it today!

These other Chick-fil-A recipes will be a hit with your family! 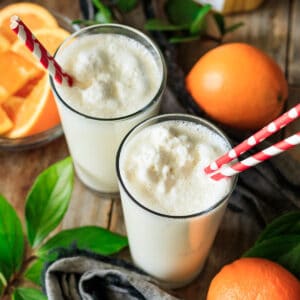 Copycat Chick-fil-A Frosted Sunrise is a fruity ice cream drink that’s fun and easy to make this summer for your kids.  Use a blender to get the best results for this simple frozen treat.  Pour it into a tall glass for a refreshing drink at breakfast, at the beach, or any time of the day.
5 from 3 votes
Print Pin FavoriteSaved! Rate
Course: Beverage
Cuisine: American
Keyword: chick fil a, copycat, frosted sunrise
Prep Time: 5 minutes
Total Time: 5 minutes
Servings: 3 servings
Calories: 670kcal
Author: Brooke