Southern boiled peanuts are a protein-packed snack.  They're wonderful in the late summer and early fall when fresh green peanuts are in abundance in the South.

With only three ingredients, this recipe is easy to make; it just requires time.  If you have never tried one before, you'll be in for a pleasant surprise. 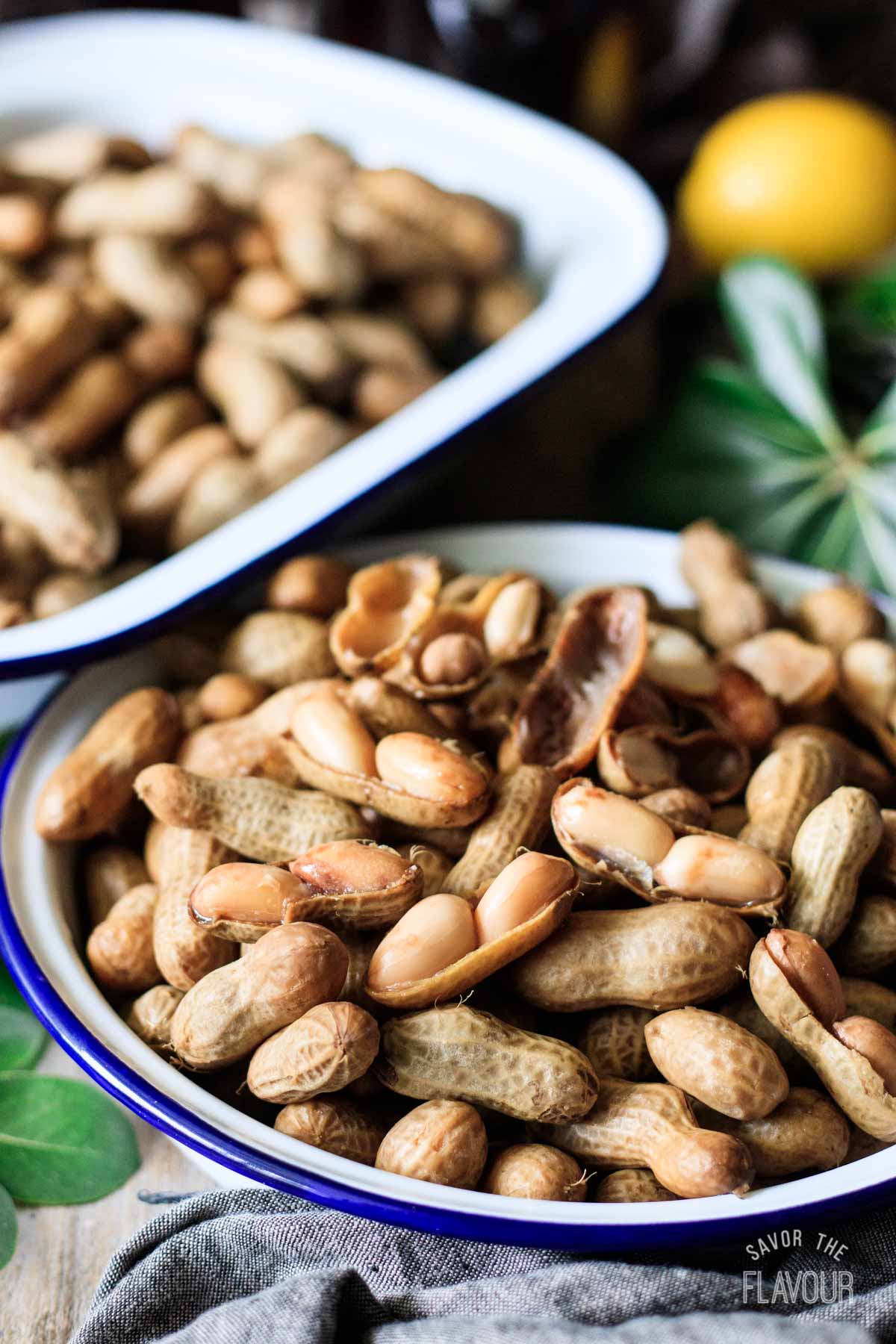 What are boiled peanuts?

It is a popular snack in the Southern U. S.  They are soft, salty, and packed full of protein.  To make them, green peanuts are boiled in salty water for hours until the shells and peanuts get soft.  They have a different taste than dry roasted, but are just as addictive.  In peanut-growing states, you can buy them from roadside stands, gas stations, and grocery stores during the peanut growing season (August to October).

What is a green peanut?

A green peanut really isn't green.  It is a freshly harvested peanut that hasn't been dehydrated.  They have a higher water content and hold more moisture, so they can spoil quickly. 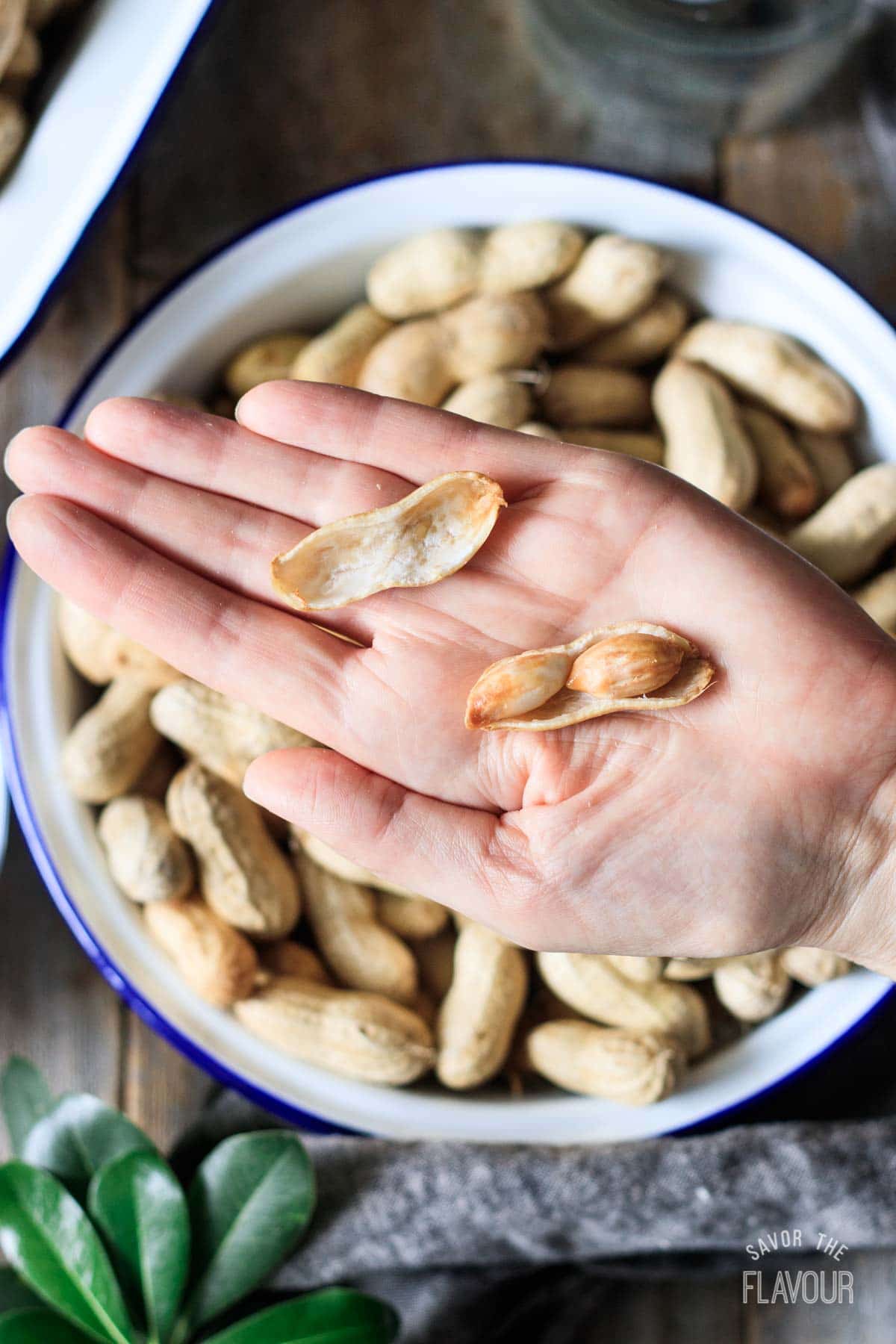 No one knows for sure who invented boiled peanuts, but history tells us that Civil War soldiers boiled them in Georgia during General Sherman's march to the sea.  In the 1920's, peanut farmers became more common and boiling them with salt caught on as an economical and nutritious snack in the Southern states.

What is so good about this snack?

Boiled peanuts have the same health benefits as roasted, except that boiled have 4 times more antioxidants.  Boiling draws the antioxidants from the peanut shells.

They are also good sources of omega-3, and are high in vitamin E, fiber, and good fats.  They are also high in protein, and are low in carbs.

Above all, they taste amazing and make you feel full, so they are an excellent choice for snack food. 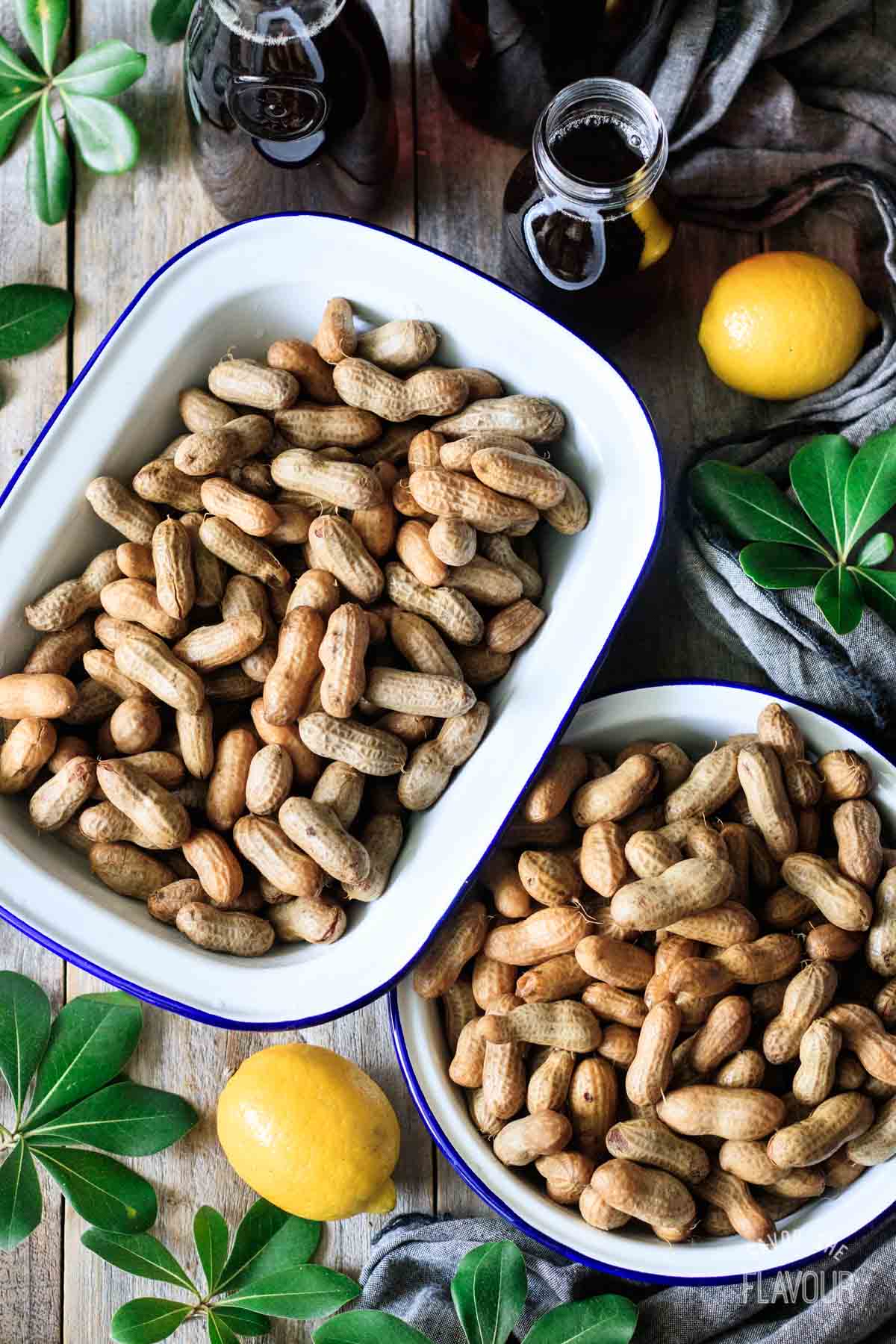 How do I eat this?

Crack open the shell with your fingers and pick the peanut out.  There's no need to be fancy when serving this snack to guests; this is casual country food.

If you have a small boiled peanut that is too hard to crack open with your fingers, place it in your mouth and crack it open with your teeth; just don't eat the shell.  Have napkins ready because they can squirt brine when the shells are cracked.

What is the best way to serve this recipe?

Many people consider this snack tastes best when served hot, straight from the pot.  To do this, dip a large slotted spoon into the pot so the brine gets strained and only the peanuts remain.

Serve in small bowls with napkins.  Provide another bowl for the empty peanut shells.  If you're eating them outside, you can throw the shells into a paper bag for easy disposal.

Should I refrigerate them?

They can last 24 hours at room temperature.  If you have any leftovers, it is best to cover them and put in the fridge.  They will last 7 to 10 days if stored properly. 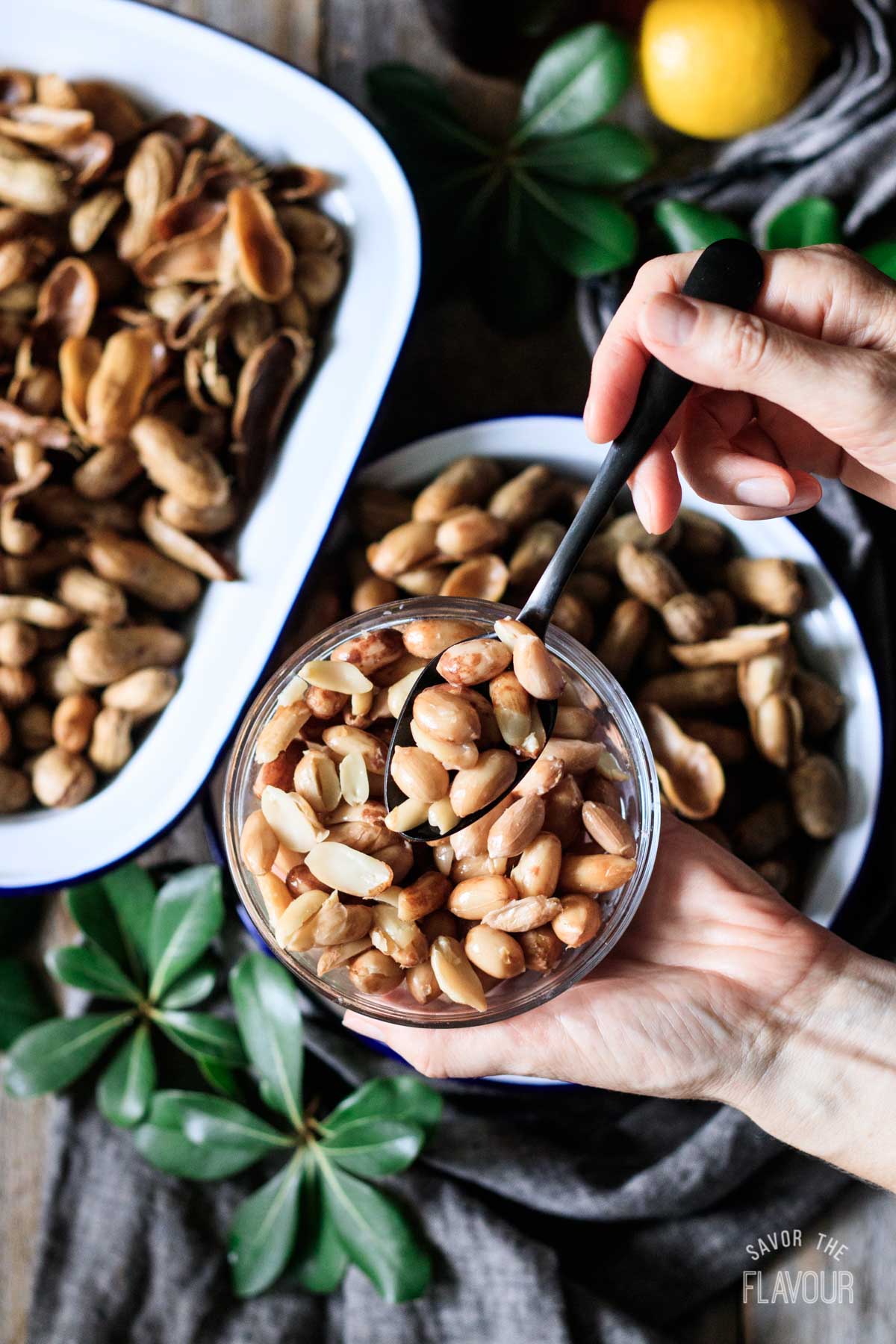 Can vegans eat this recipe?

Do boiled peanuts have sugar in them?

Peanuts have a low GI value of 13, so they don't cause blood sugar to rise sharply.  They actually help to control blood sugar.

How can you tell when they are done?

You'll know when they are done because the shells will be darker and softer, and the meat of the peanut will be soft.

When you do your taste test, take out a few from different areas of the pot.  The ones on top are usually less salty then the ones in the middle.

They should have a pleasant balance of saltiness to umami.  If they are not salty enough, just add a bit more salt, turn off the heat, and let it sit longer.  If they are too salty for your liking, drain them and soak them in cold water for an hour.

What causes the peanut to stick to the shell?

After boiling them in a mixture of water and salt, the shell softens and the brine gets inside.  This can cause the peanuts to swell and sometimes stick to the shell.  If this happens, use your fingernail or a small spoon to get the peanut out. 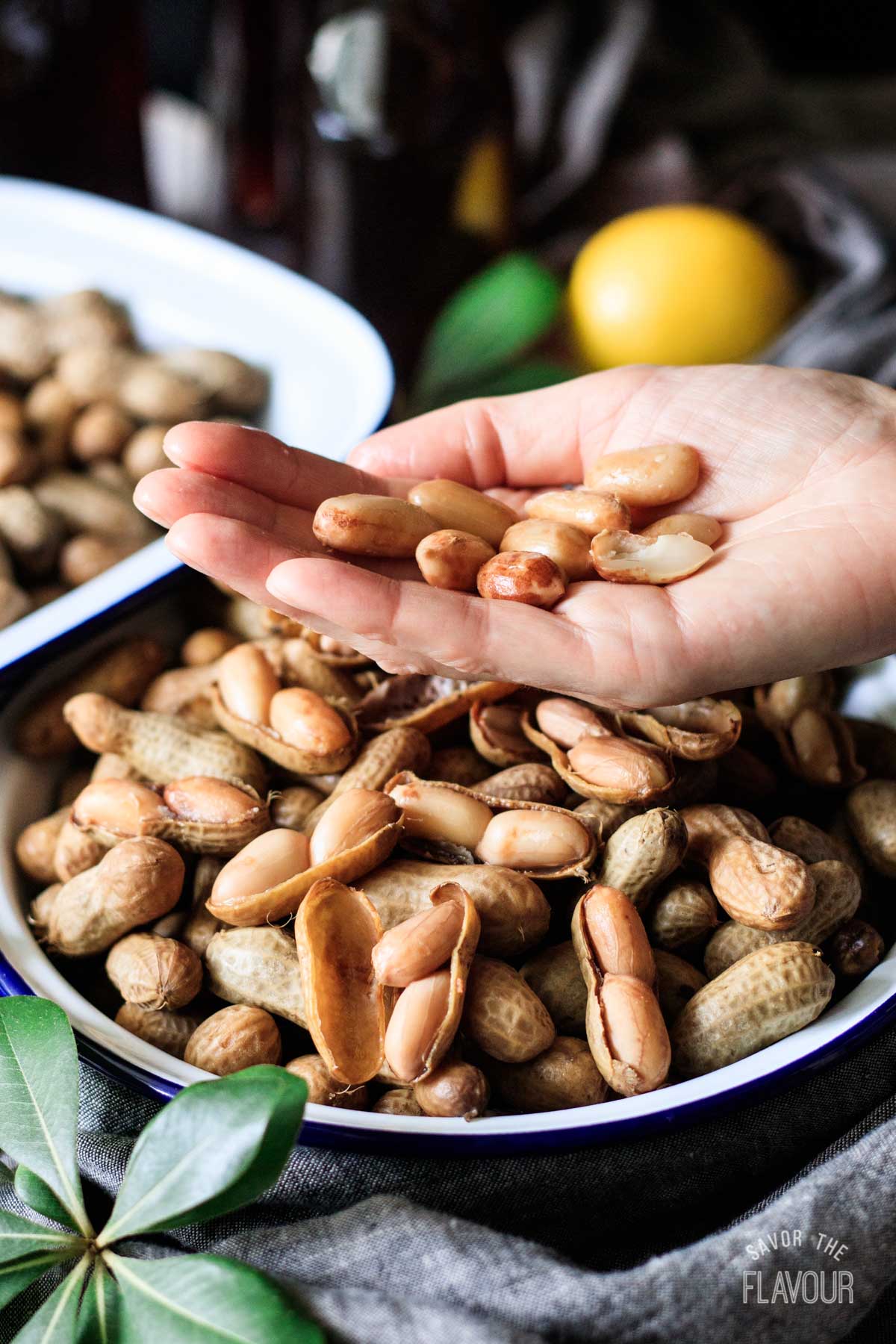 How do you reheat this recipe?

The best way to reheat this snack is to put them in a saucepan with water and bring them to a boil, reduce heat, and simmer for 5 minutes.  Crack one open, and if necessary, add one tablespoon of salt and stir.  When ready to eat, drain and enjoy.

Can I use raw dried peanuts instead of fresh?

Yes, you can, but they will take longer to cook.  If you're using the raw dried variety, soak them first for 8 hours in water, then increase the cook time by two hours.  Keep checking them each hour.

How do you freeze this recipe?

Start by draining the peanuts from the brine, and allow them to fully cool, then freeze in zip-top freezer bags or another airtight container.  They should last up to 6 months. 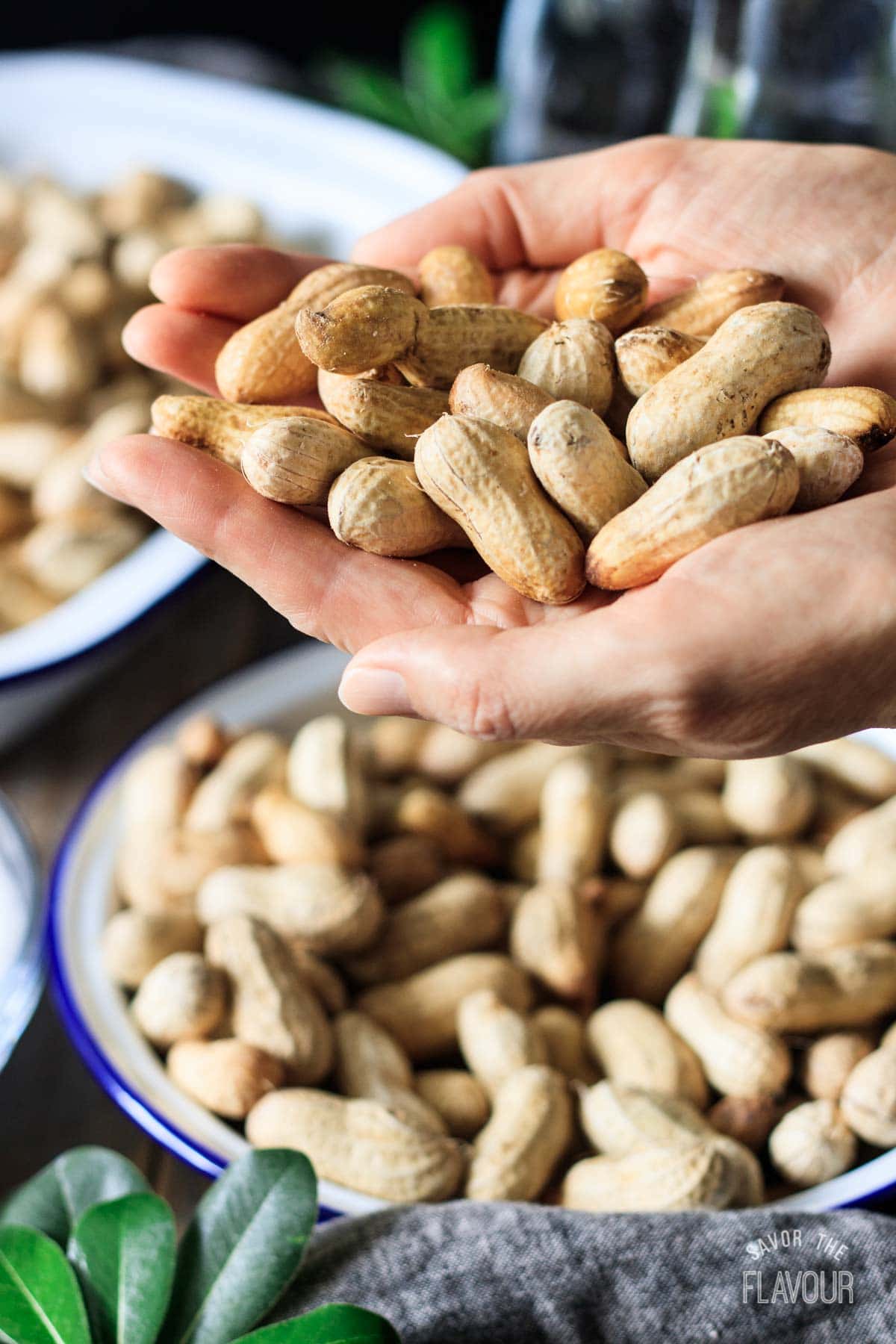 Where can I buy green peanuts for boiling?

Gather the three ingredients: 3 pounds of freshly picked green peanuts, a cup of salt, and water. 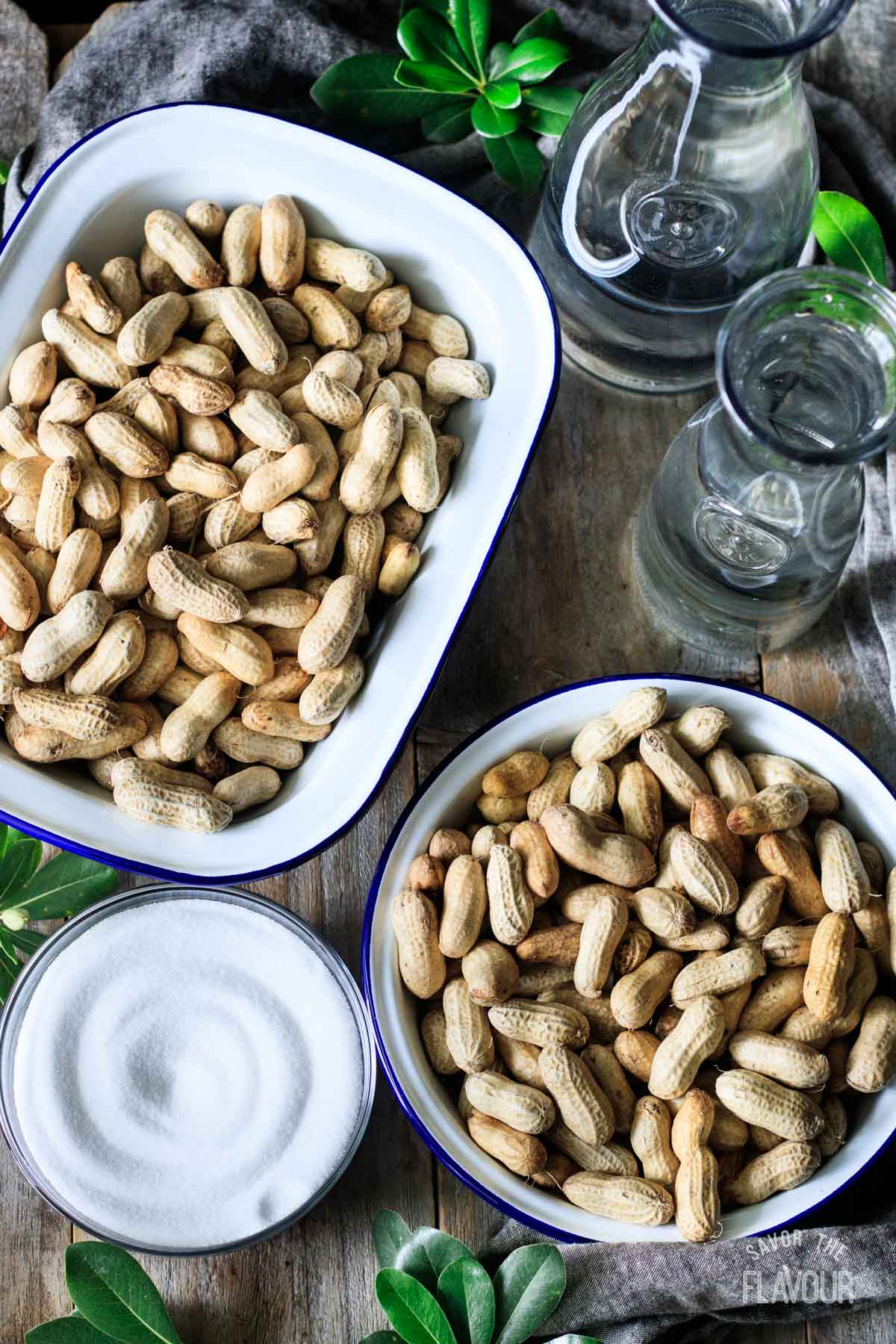 Put the fresh green peanuts in a colander and rinse them in the sink two or three times to get all the dirt off them.

Place them in a large Dutch oven and cover with cold tap water.  Press them down with your hand to get them submerged. 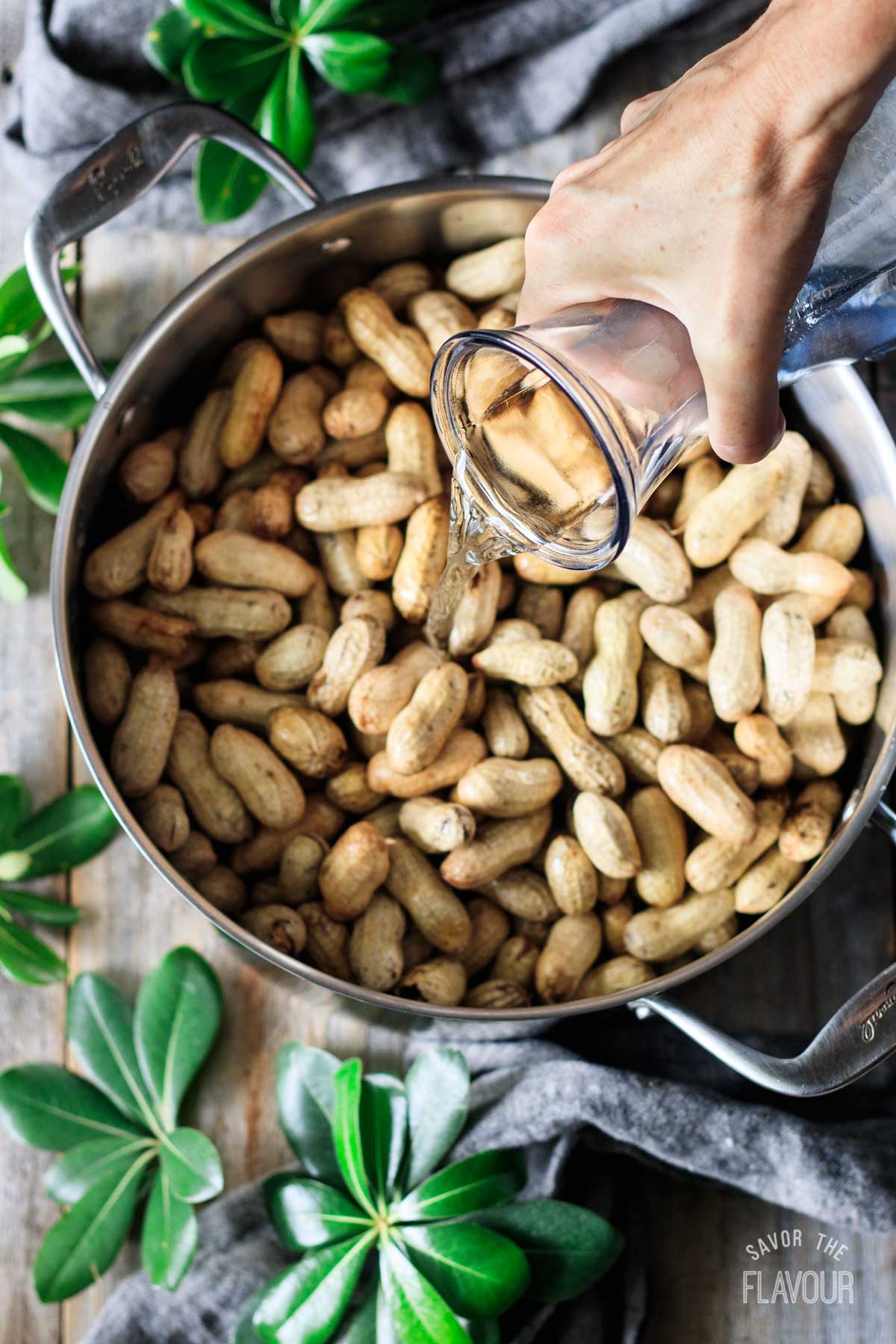 Add ¾ cup of salt and stir with a big spoon.  You can use any kind of salt: table, kosher or sea salt.  Cover and bring to a boil.  Reduce heat and simmer for one hour. 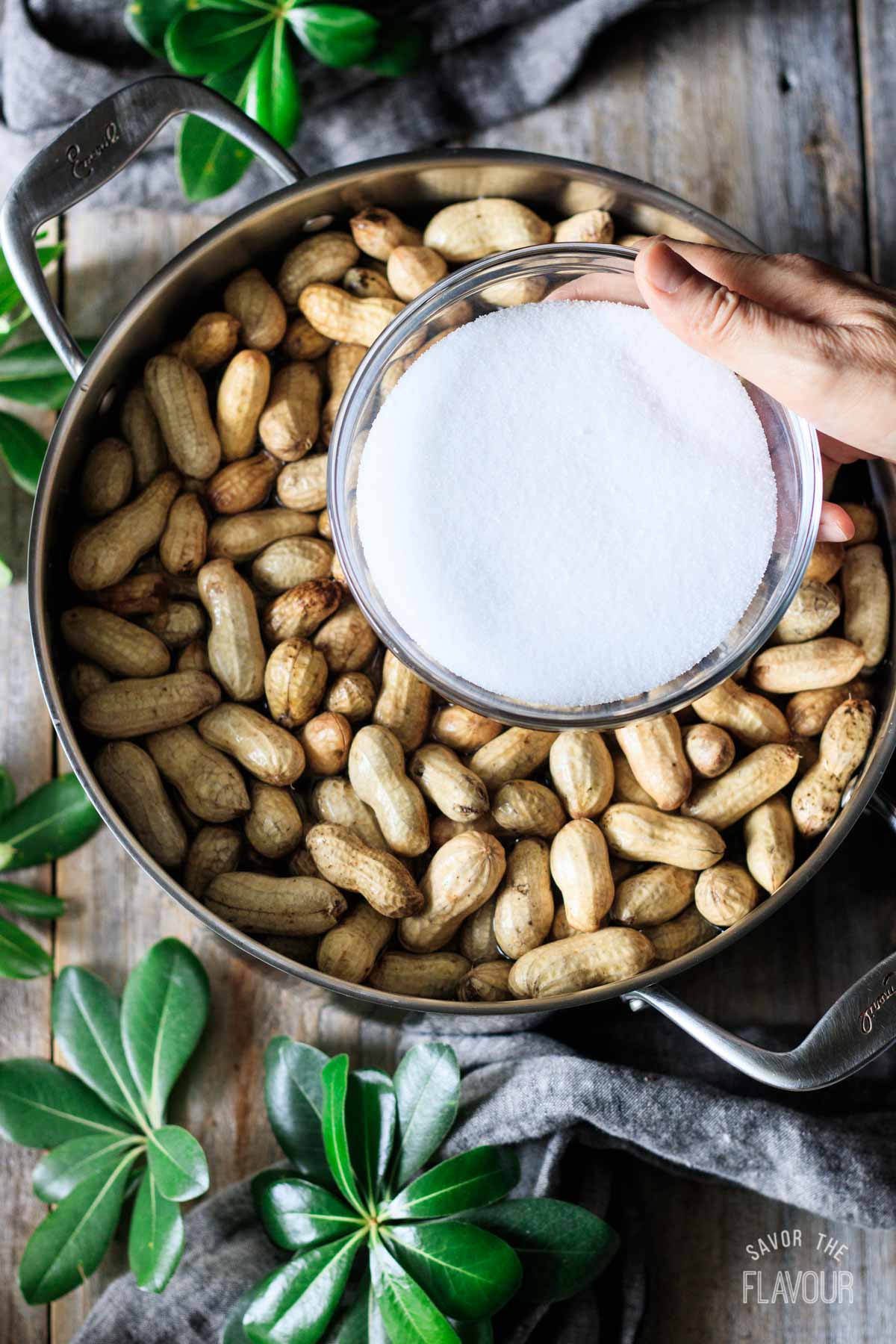 During the first hour of cooking, stir every once and a while so the ones on top can be mixed around.  Make sure to put the lid back on the Dutch oven.  Once it has simmered for 1 hour, shut the heat off and let the pot sit on the element with the lid on for 8-10 hours, or overnight. 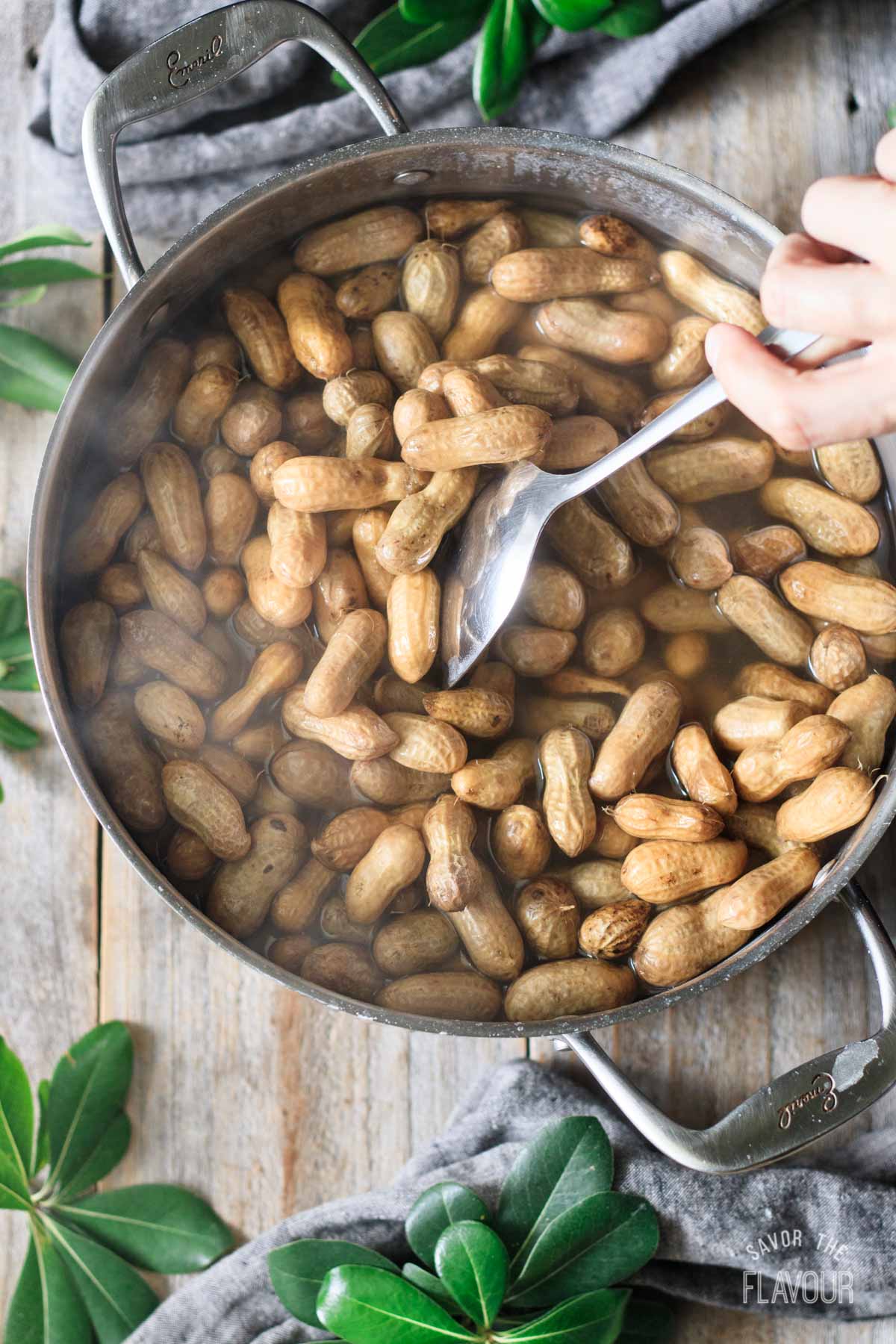 After the pot has been sitting on the turned-off element for 8-10 hours, drain them in a colander in the kitchen sink and rinse with cold water. 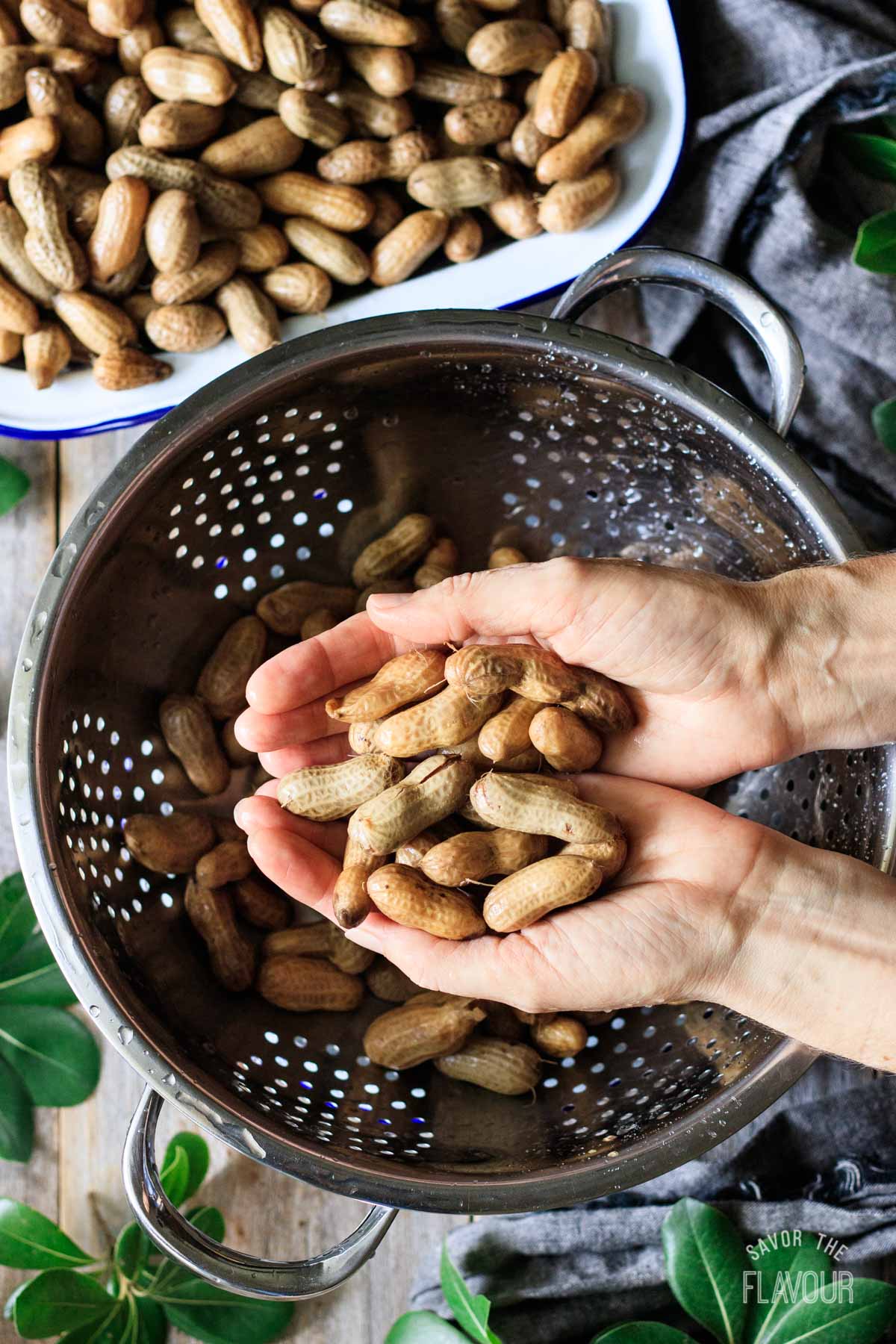 Put them back in the Dutch oven and cover with more tap water. 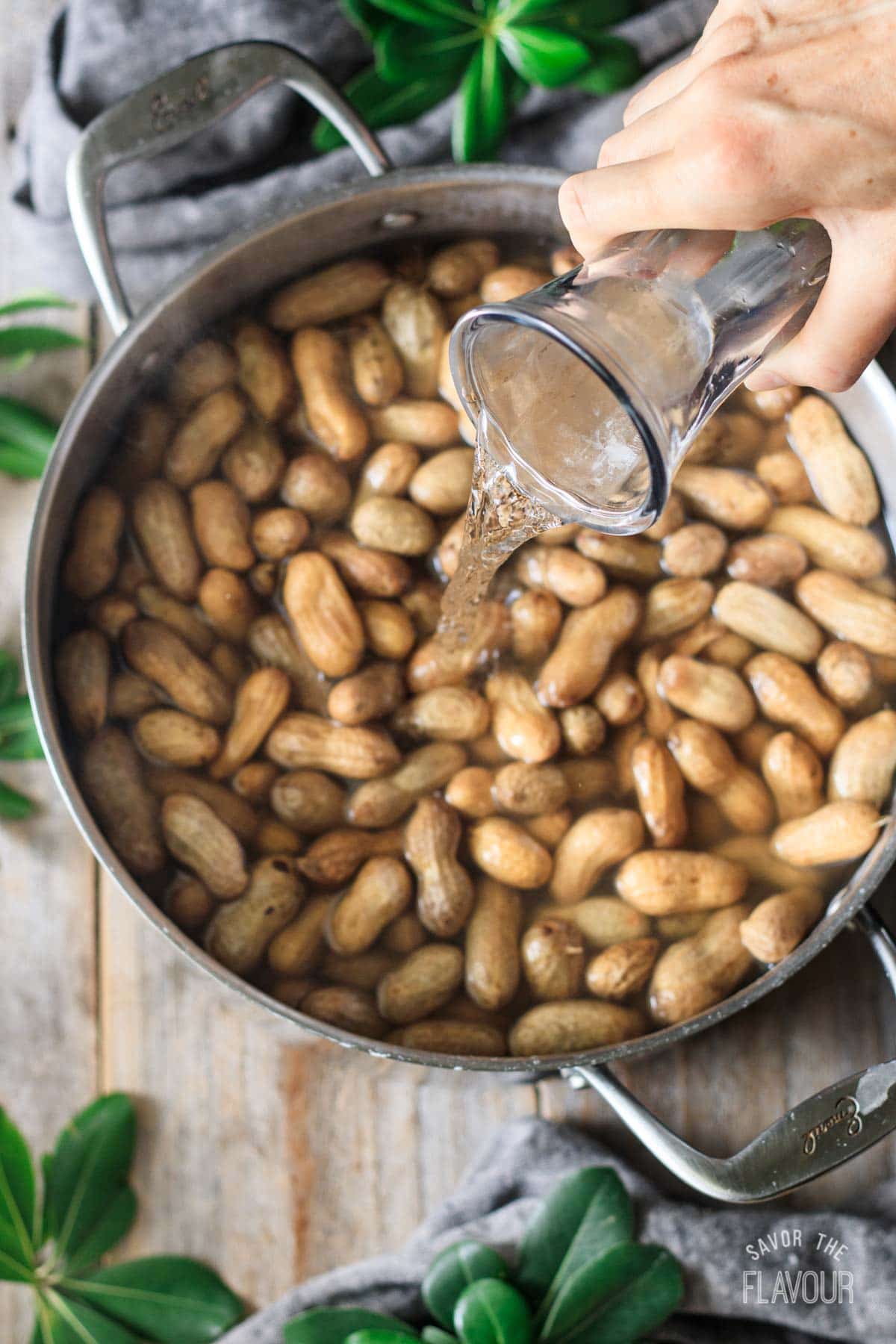 Add ¼ cup of salt and stir until it's well mixed.  Cover the pot.  Bring to a boil, reduce heat then simmer for two hours.

Remember to stir them occasionally, and add water when needed, as the water will evaporate when it's simmering on top of the stove. 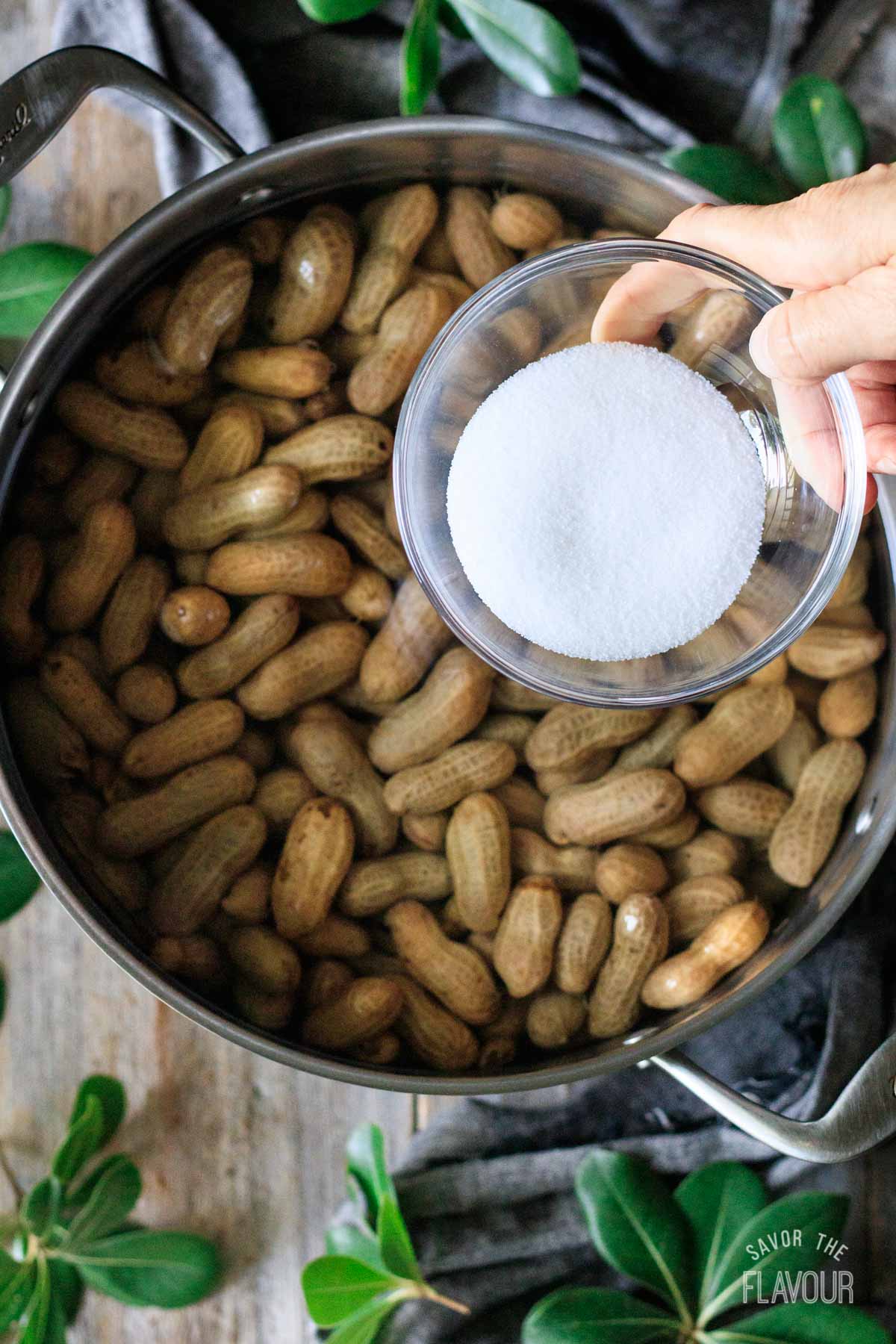 After two hours of simmering, check for doneness.  Fish out two or three from different areas in the pot.  Crack the hull with your fingers and taste the legume. 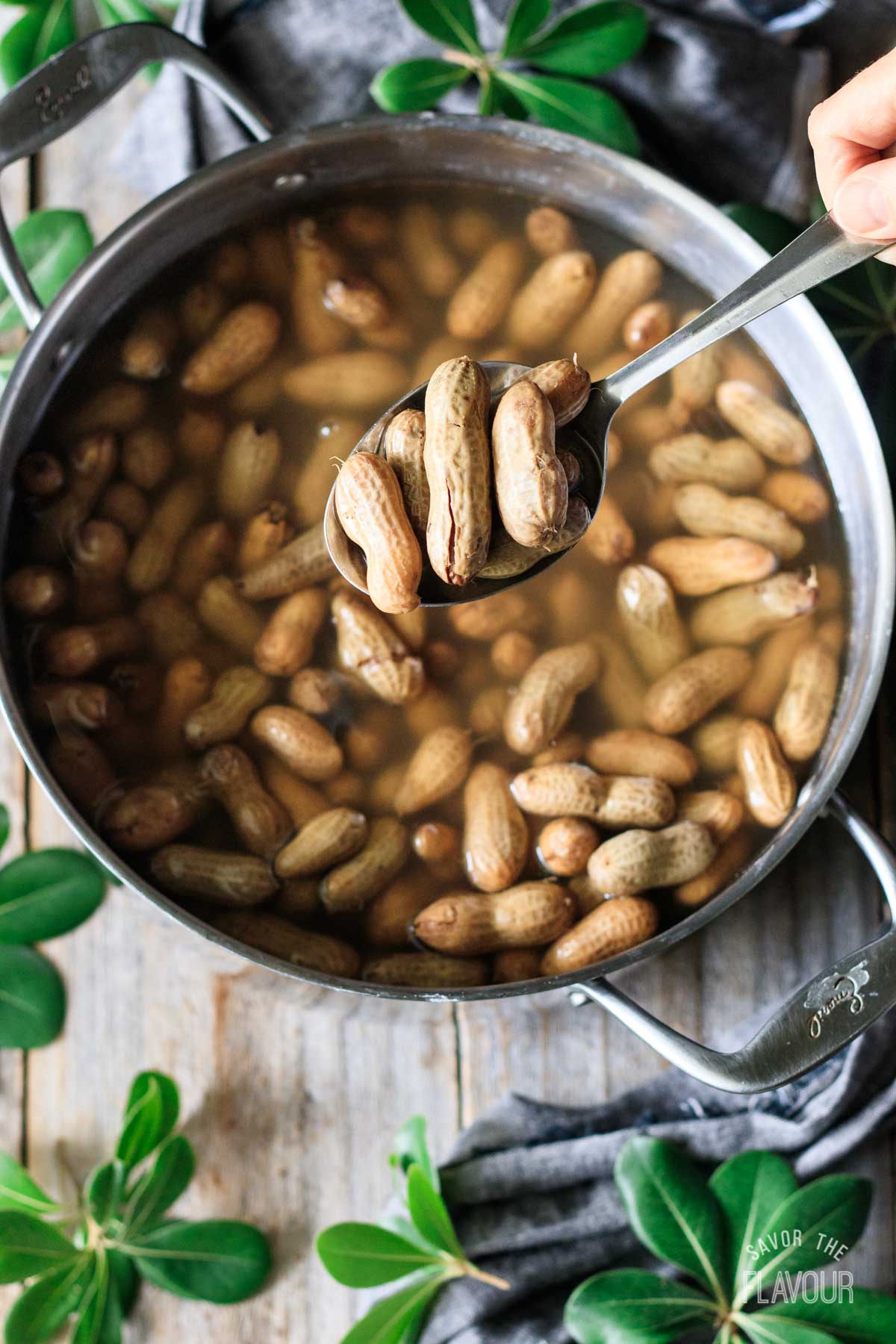 Take out two to four out from different areas of the pot and test them.  Are they soft enough?  Is there enough salt? 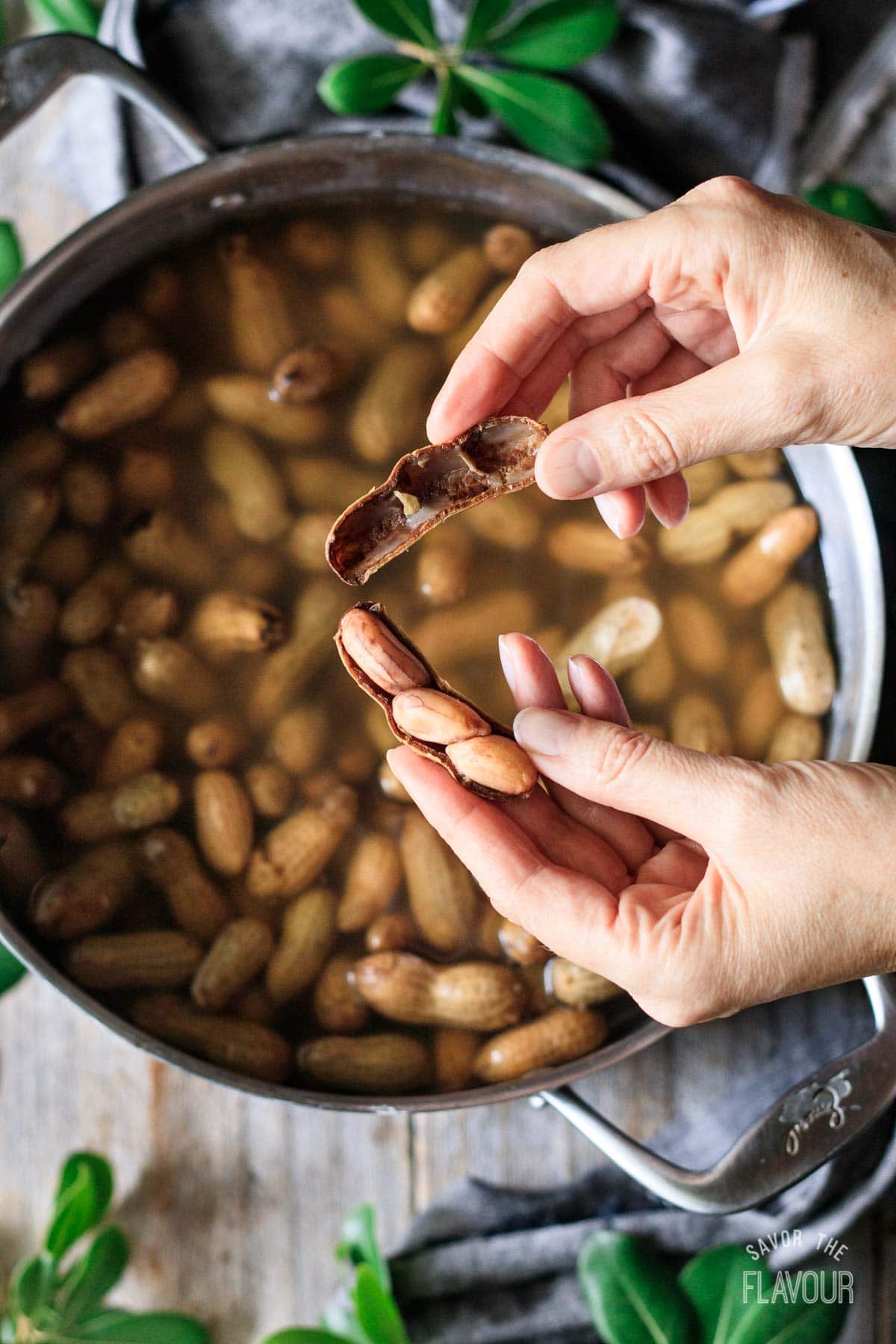 Wondering when they are done?  Here are some ways to tell.  The outer shell should be soft when you squeeze it.

When you crack the hull open with your fingers, the peanuts inside should have swollen in size.  There also should be brine inside the peanut shell, and the peanut should be soft when you chew it.  When you taste it, it should be salty enough for your taste preferences.

You can serve this recipe hot or cold; the choice is yours.  Our family likes them both ways.  The fun part is cracking them open with your fingers.  Make sure to have napkins nearby, as the brine can squirt you when the shell is cracked. 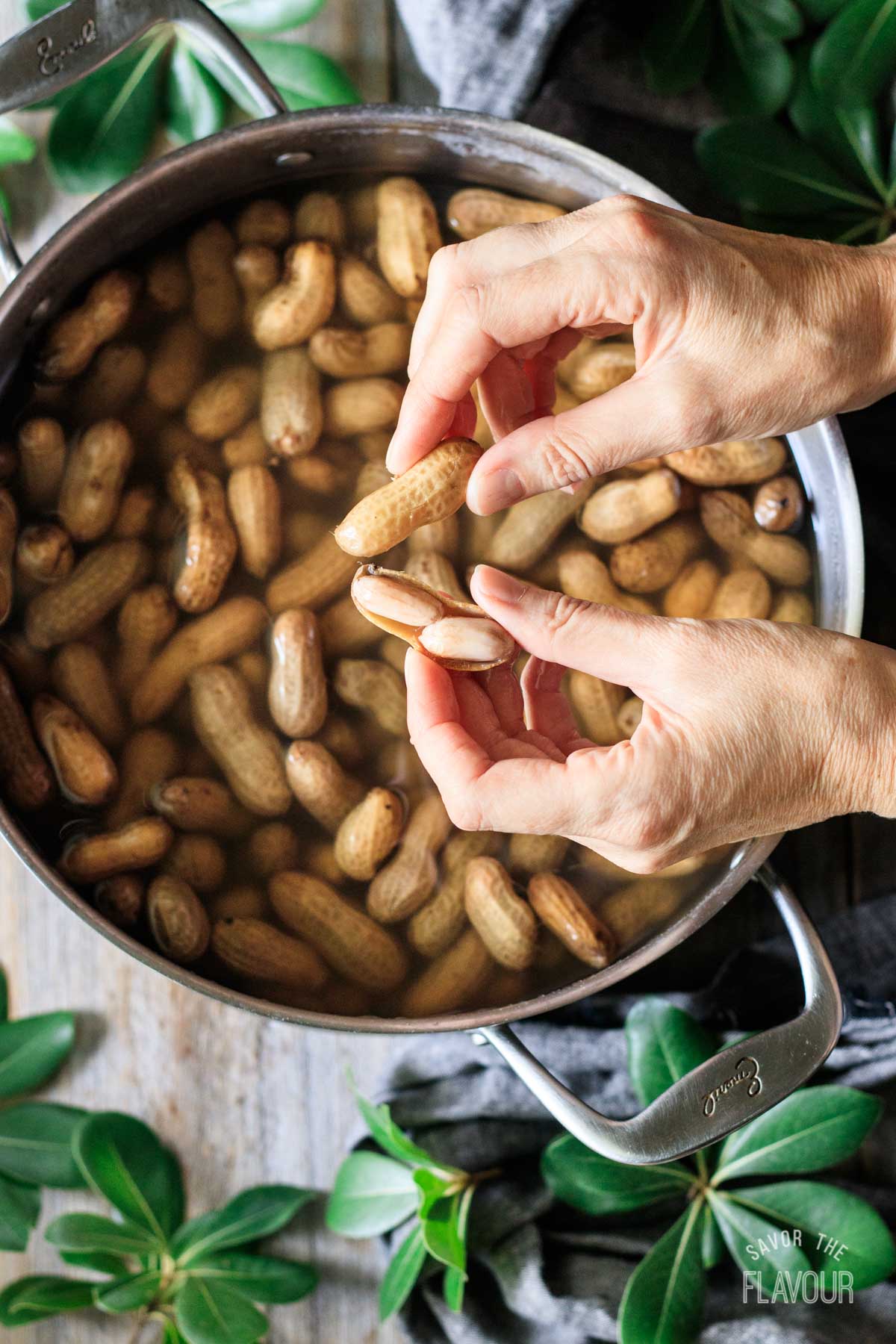 Satisfy your craving for Southern snacks with these other delicious recipes.

Our Southern boiled peanut recipe is so simple!  Learn how to make this easy snack food on the stove top from green peanuts in their shells.  Kids and adults love to snack on these soft, salty treats during car trips, tailgating, and game days.