Black-eyed peas are traditionally served on New Year's Day in the South, but this dish is too good to only serve once a year! It's low in fat and high in protein and dietary fiber, so it's not only tasty, but good for you.

If you're looking for other traditional Southern New Year's Day recipes, you'll definitely want to check out our recipes for collard greens and skillet cornbread.

Many people in the American Southeast believe that if you eat black eyed peas on New Year's Day, it will bring you good luck.

This superstition dates back to the American Civil War, when some say black eyed peas were the only thing many slaves had to eat when the Emancipation Proclamation took effect. Others believe General Sherman's troops left the black eyed peas when he marched through Georgia because he considered it pig's food.

Traditionalists also believe you need to eat exactly one pea for each day of the year, and it has to be eaten with pork (ham) and collard greens.  I don't know about you, but that sounds like a lot of black eyed peas to me, so if you are planning on eating that many peas, it had better taste good!

All the ingredients for these Southern black eyed peas are easy to find in your local grocery store. Here's the key ingredients that make this dish so delicious!

3. Melt the butter in a large pot over medium high heat.  Cook the onion until soft, then add the garlic.

5. Cover the pot.  Bring to a boil over medium-high heat, then reduce the heat to medium low and simmer for 30 minutes, stirring occasionally.

6. Remove the meaty ham bone with a large slotted spoon.  Place on a plate to cool.

7. Place the lid back on the pot and continue to simmer for another 30 minutes, stirring every once and a while.  Once the ham bone is cool, cut off the meat and finely chop it.

8. Add the meat to the pot and stir until well mixed.  Taste and adjust seasonings, if necessary.

9. Serve warm with fresh cornbread, collard greens, and baked ham for a traditional Southern New Year's Day menu. Black eyed peas and ham is a winning combination that you'll want to eat any day of the year.

Do the peas have to be soaked overnight?

No, you can use the quick soak method if you're short on time. Sort and rinse the dried black eyed peas, then place them in a pot and cover with water. Boil for 2 minutes, then remove it from the heat and let it stand covered for one hour.  Drain and rinse with cold water.

What are the side effects of eating black-eyed peas?

Black eyed peas are high in raffinose, which is a type of fiber that can cause digestive issues with some people. When you soak and cook the dried black eyed peas the percentage of raffinose is reduced, which makes it easier to digest and will lessen gas and bloating.

For a traditional Southern New Year's Day menu, people like to serve black eyed peas along side spiral ham, collard greens, and cornbread.

Are black eyed peas a vegetable or starch?

They are actually a legume, which makes them a mature bean. They contain nutrients like fiber, folate, and potassium, which are also found in the vegetable group. 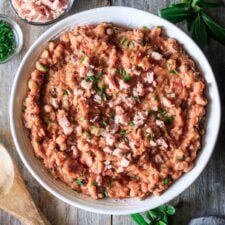