Craving something savory and creamy?  Our Panera baked potato soup has tender potato chunks simmered in a flavorful, creamy broth. Fall in love with this comforting entree by customizing it with your favorite baked potato toppings.

Are you a big fan of Panera's soups?  You'll want to check out our copycat versions of their creamy tomato soup and their bistro French onion soup.

Our copycat Panera baked potato soup recipe uses pantry staples that can be found in most major grocery stores.  The only ingredient that might be hard to find is the Neufchâtel cheese, which is similar to cream cheese.

Gather all the ingredients to make this copycat recipe.

3. Add the whole milk and heavy cream and stir.

5. Cover and bring to a near boil, then reduce the heat and simmer for 8 minutes, or until the potatoes are done.  While the soup is simmering, cook the bacon in a cast iron skillet until golden. Mash half of the potatoes. This will help thicken the broth and change the texture.

6. Add the spices and seasonings and stir well to combine.  Note: the turmeric is optional, but Panera does have it listed in their ingredients.

7. Add the softened cubed Neufchâtel cheese, the freshly grated Parmesan cheese, the crumbled bacon, and the chives.  Whisk the baked potato soup until the Neufchâtel cheese is melted. Simmer on medium low heat for 15 minutes, taste, and adjust seasonings if necessary.

8. Serve hot with your choice of toppings.  We suggest freshly grated Parmesan cheese, bacon, and chives.  If you're feeling fancy, serve it inside a sourdough bread bowl from Panera's bakery or from your local grocery store.

Did Panera discontinue their potato soup?

No, you'll find that some cafés will carry it, but others won't.  At the time of this post, our local café does carry it.

Is their potato soup gluten free?

Panera has some gluten conscious menu items.  This means there is flour in the air due to baking bread, and the veggies are cut on boards where breadcrumbs could be.  If you read the ingredients list for baked potato soup, Panera uses rice flour and cornstarch to help thicken it.

Our copycat recipe can easily be made gluten free by replacing the all purpose flour to your favorite gluten free flour, like King Arthur's measure-for-measure flour.  You can also leave out the flour and have a soup that is a little less thick because it is also thickened by mashing half of the potatoes. You can also use a cornstarch slurry at the end.

What are the calories for this soup?

For the same serving size, our copycat version has 268 calories, 15g fat, 26g carbs, 3.8g sugar, and 7.4g protein.  For more nutritional facts, please scroll to the end of the recipe card.
Can I freeze this soup?

It is not recommended to freeze this recipe.  The potatoes act like a sponge, absorbing moisture and becoming gummy after reheating.  Plus, dairy based soups separate and lose their creamy consistency after being frozen and reheated.

Panera serves this entree with a choice of sourdough bread bowl, for an up charge, a bag of kettle chips, a piece of baguette, or an apple.

Other serving suggestions are a slice of crusty bread, side salad, and fresh fruit. 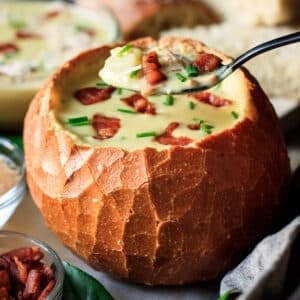 This post was originally published on April 9, 2021, and was republished on December 16, 2022 with resized images and refreshed content.