Want a great way to enjoy raspberries? Look no further than this traditional Scottish dessert: cranachan. You'll love each bite of raspberries, toasted oats, and cream flavored with whisky and honey.

Despite its current fame as one of the best Scottish desserts, it originally started as a breakfast dish made with crowdie (a cow's milk cheese), oats, and honey. Raspberries were added when they were in season (around June).

Over time, cranachan became Scotland's version of England's Eton mess, and was eventually turned into a dessert. It's now more commonly made with whipped cream instead of crowdie. You'll enjoy eating this because it celebrates of some the best-known Scottish foods: raspberries, oats, heather honey, and whisky.

3. Pour the cream into a large mixing bowl and beat until soft peaks form. Add the whisky and honey, then taste and adjust as desired. Beat the mixture until stiff peaks form.

4. Layer the cream, oatmeal, and raspberries in heavy-based whisky glasses. Start with a layer of cream, then toasted oatmeal. For the best presentation, consider piping the cream and raspberries.

5. Add a layer of the crushed raspberries, then repeat the layers again.

6. Garnish each cranachan with additional toasted oatmeal and three fresh raspberries. Serve immediately for a crunchy cranachan, or chill in the fridge for 1-2 hours to allow the oatmeal to soften.

What is the most famous Scottish dessert cranachan made of?

Cranachan is made from quintessential Scottish ingredients: raspberries, oats, honey, and Scottish whisky. Traditionally, cranachan was made with crowdie, a cow's milk cheese, instead of the whipped double cream that's used now. It's traditional to use Scottish pinhead oats (known as steel-cut in the US) and heather honey in this dessert.

What is the meaning of cranachan?

Known as the "king of Scottish desserts," cranachan's name is the Scottish Gaelic term for "churn." This is because the dessert was originally made with a cow's milk cheese called crowdie instead of whipped cream.

Is cranachan a parfait?

How do you pronounce the Scottish dessert cranachan?

Although cranachan looks like it would be tricky to say, fortunately it's quite simple to pronounce! Phonetically, it's pronounced KRAN-ah-kin.

Cranachan was originally served as a breakfast food year round in Scotland, with the raspberries added when they were in season (June). Since imported raspberries can be available year round, this dessert made with the raspberries is served on St. Andrew's Day or at any Scottish celebration. It is also often served as the dessert at a Burns Supper, which are held every January 25 to celebrate the life of Scotland's best known poet, Robert Burns.

It's popular to serve all the components of the cranachan separate to allow each guest to assemble their own cranachan according to their tastes. Alternatively, you can assemble them all in your kitchen and serve them already made to your guests.

Make Ahead: It's best to eat cranachan right away after assembling it, but you can toast the oats and mash the raspberries ahead of time. Then, simply whisk the cream mixture and assemble the cranachan when you're ready to eat them.

You can also assemble the cranachan and chill them for 1-2 hours to allow the oats to soften and the flavors to meld. Don't allow them to sit much longer than this, or they'll become soggy and unappetizing.

Soaking the Oats: Some people prefer to soak three quarters of the toasted oats overnight in whisky, then fold the soaked oats into the whisked cream the following day. 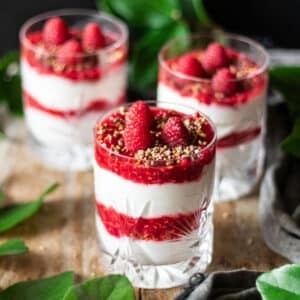