Craving soft, chewy, and buttery snickerdoodles, but want a vegan version?  You're in the right place with this amazing recipe!  Everyone who's tasted it has loved the taste and texture of these cookies.  These vegan snickerdoodles are so quick and easy to make, you'll be coming back to this recipe again and again.

Love vegan desserts? Make sure to try these pumpkin cinnamon rolls and these vegan gingersnaps.

What makes vegan snickerdoodles different from regular ones?  Fortunately, you won't have to do a ton of substitutions to make them vegan.  Just swap the egg for applesauce, and regular butter for vegan butter.

Since cinnamon is the key spice in these cookies, make sure you're using a top-quality cinnamon.  My absolute favorite is the McCormick Saigon cinnamon (affiliate), which has a delicate spicy flavor and rusty brown color.

Sift the flour, cream of tartar, baking soda, salt, and cinnamon into a bowl.

Beat the vegan butter and sugar together with the paddle attachment of a stand mixer for 2-3 minutes.  Make sure that the mixer is on medium speed.  Then, add the applesauce and vanilla, along with a spoonful of the flour mixture.

Gradually add the rest of the flour mixture, running the mixer on low speed until the ingredients form a dough.

Roll the dough into tablespoon-sized balls.  Mix together the additional sugar and cinnamon, then roll the dough balls in the cinnamon sugar.

Space the snickerdoodles evenly apart on 11x17-inch cookie sheets lined with parchment paper, fitting 12 cookies per tray.  Bake at 375 F for 8 minutes per tray, then let them cool on wire racks.  The cookies will look underbaked when they come out, but they will set up considerably as they cool.

Why are snickerdoodles called that?

The origins of this unusual name are unclear, but it could be a corruption of the German name Schneckennudeln, which means "crinkly noodles."  Snickerdoodles most likely originated in New England during the 1800s, and have been popular ever since.

Can I make snickerdoodles without the cream of tartar?

Do you need to flatten snickerdoodles before baking?

The dough is quite buttery, so there's no need to flatten the snickerdoodles before putting them in the oven. The dough will naturally melt and flatten out as it bakes.

If your snickerdoodles aren't flattening out, you may have used too much flour.
Be sure to use a kitchen scale (affiliate) to measure your flour accurately.  If your cookies are flattening out too much, your oven may be not be calibrated (baking at a lower temperature than necessary), or you may not have used enough flour.

Absolutely! Freezing is actually the best way to keep leftover snickerdoodles fresh for a longer period of time. Simply let the cookies cool completely on wire racks, then seal them inside of a freezer-friendly zip-top bag or airtight container and freeze for up to 3 months. Defrost at room temperature.

If you liked this Vegan Snickerdoodle recipe and found it helpful, give it some love by sharing! 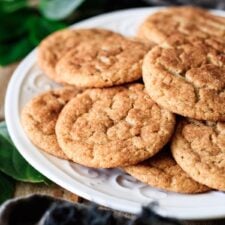