Dill pickle soup is a popular comfort food in Poland and for good reason.  It's tangy, salty and creamy; full of texture and tastes fantastic. 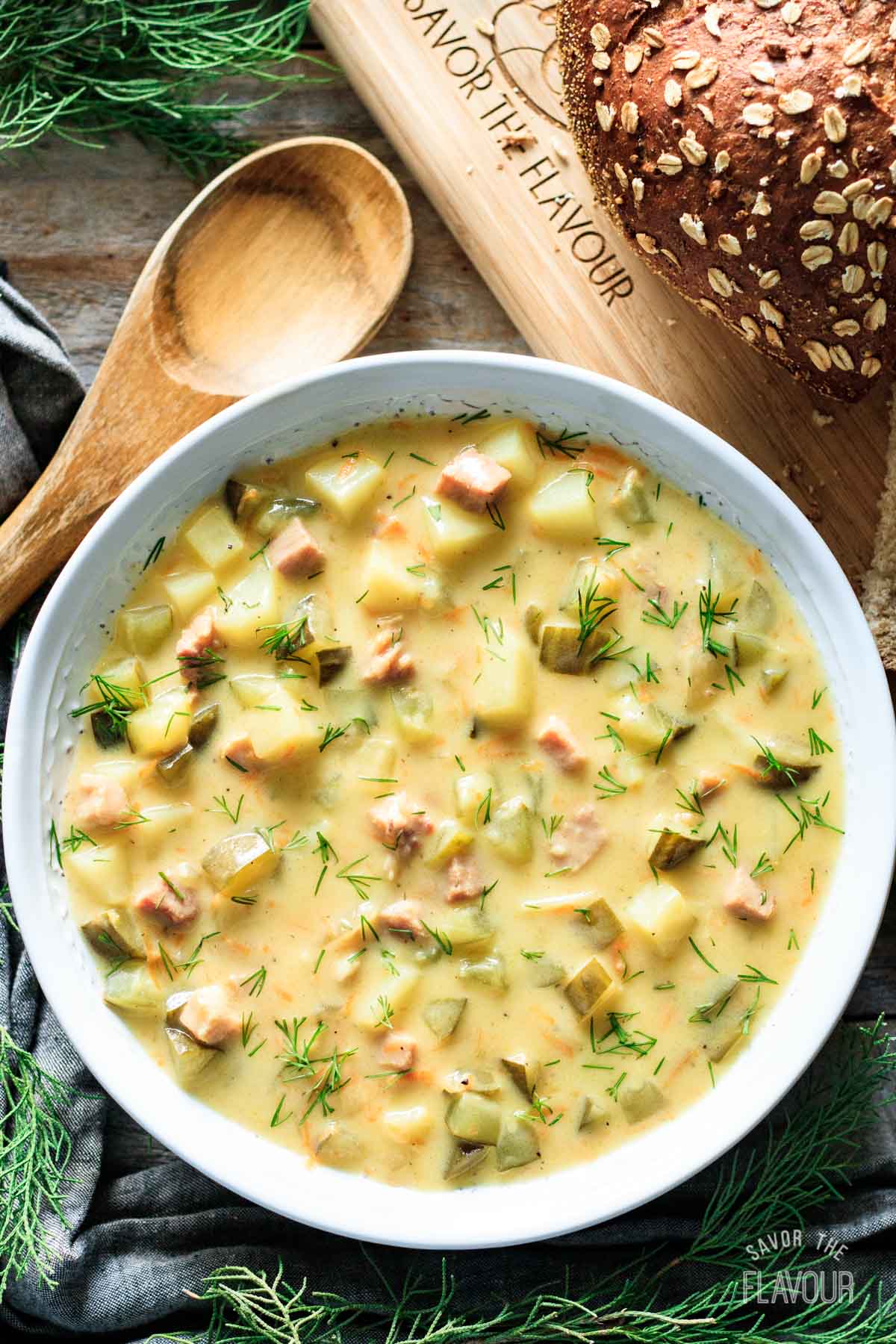 For the Polish version, start by making your own broth from pork ribs, then add your vegetables.  The dill pickles are grated and sauteed separately in butter for 5 minutes, then are covered in water and simmered for 15 minutes.  The pickles are added after the vegetables are tender, no additional meat is added, and it is left chunky.

For the American version, start with sautéing the onions, then add the chicken stock and pickle juice.  The dill pickles are chopped and are added to the broth with the chopped potatoes and grated carrot.

Where did it originate?

Variations of pickle soup can be found in Poland and Russia.  In Poland, it is known as Zupa Ogorkowa, and is one of the most favorite soups in that country.  Since it's so popular in Poland, each household makes it a bit different, putting their own spin on the basic recipe. 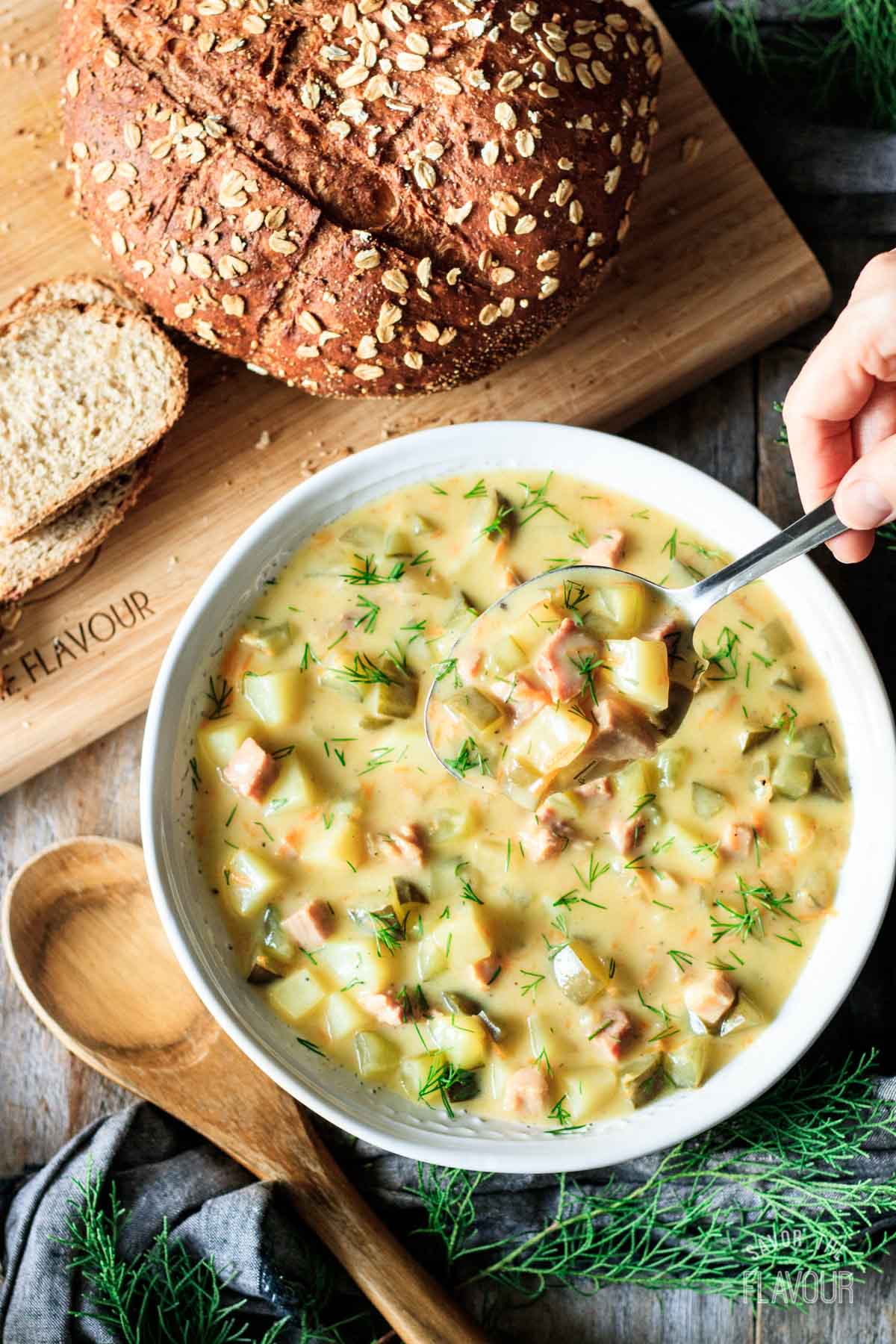 It is a complex soup with many layers of flavor.  It's savory and tangy with a nice balance of acidity from the pickle juice and creaminess from the sour cream.  The American version can be described as a creamy potato chowder.

If you love dill pickles in your potato salad, you'll be able to see the similarities. 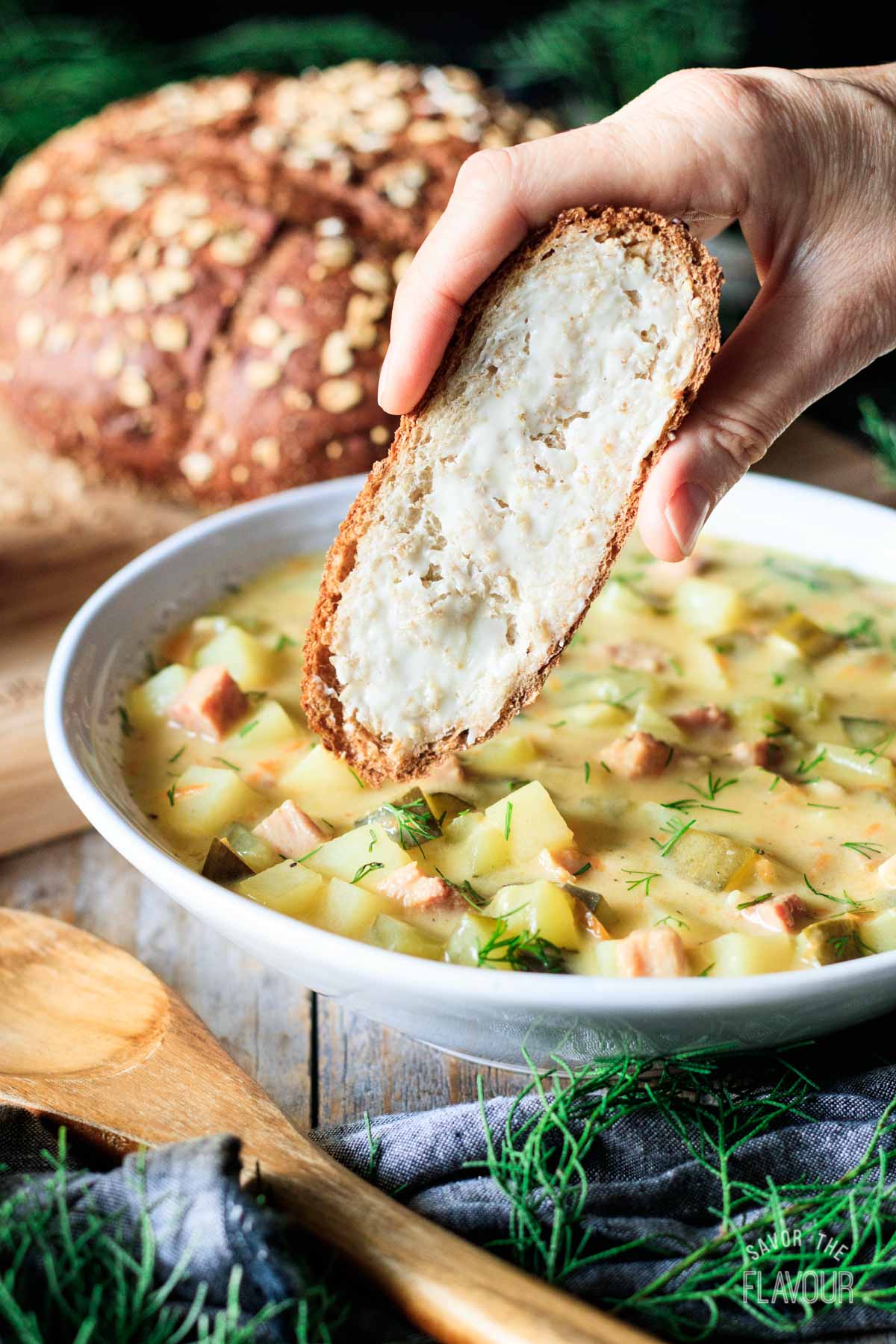 How long is this good for?

It can last for up to 5 days, as long as it is kept in an airtight container in the fridge.

Can you freeze this recipe?

Yes and no.  This recipe makes 15 cups, so if you plan on freezing some of it, set aside the part you want to freeze before adding the sour cream.  Sour cream separates when it thaws and becomes watery.

Before freezing this soup, allow it to fully cool and then place it in an airtight container or freezer zip top bag.

When ready to use, thaw it in the fridge overnight, then heat it up in a pot on the stove over medium low heat.  Add heavy cream near the end and allow it to heat through. 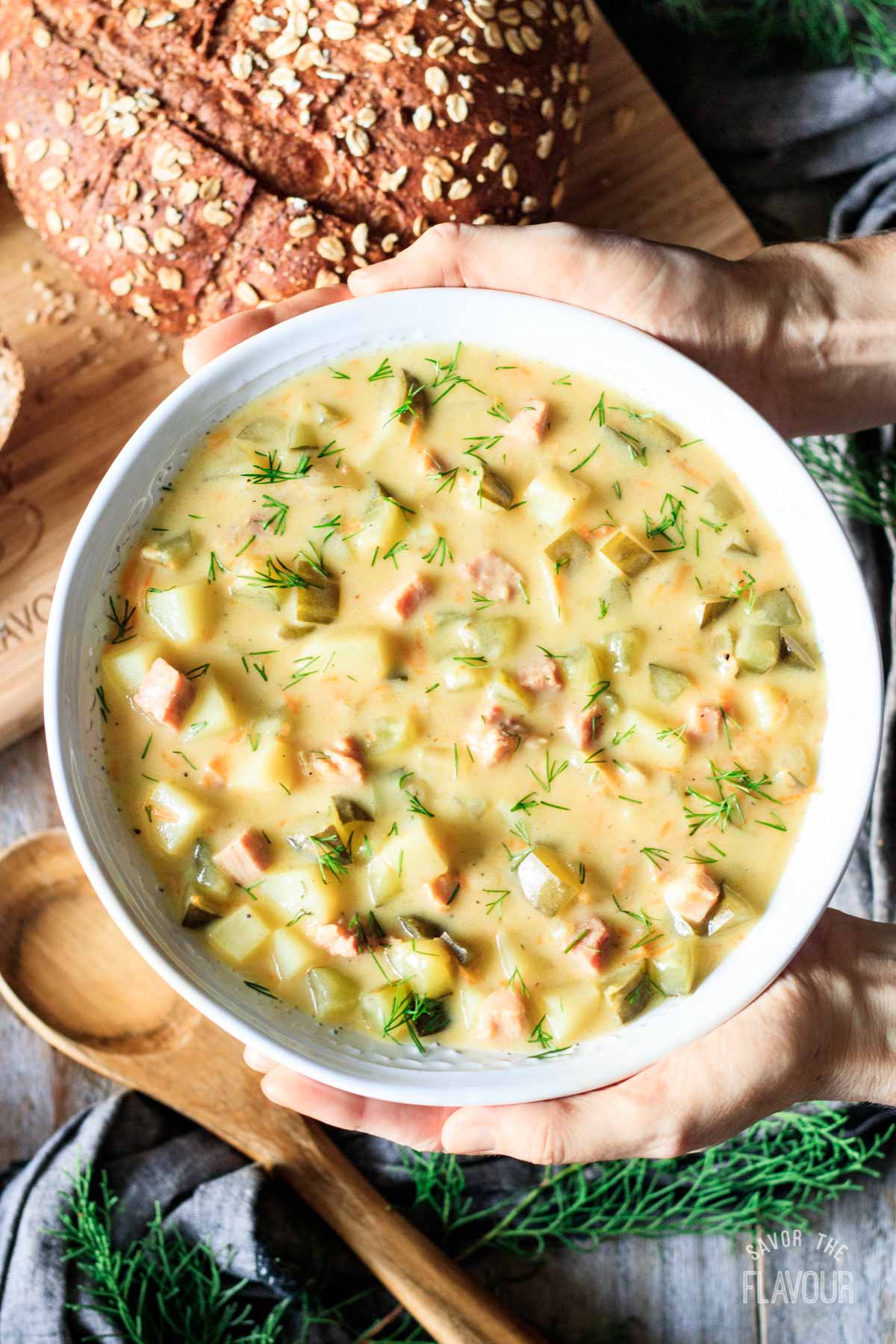 What are the calories for one serving?

One cup has 148 calories, so feel free to have seconds if you don't have to watch your sodium intake.  This soup is low in fat and carbs and is high in vitamin C.  For more nutritional information, scroll to the end of the recipe card. 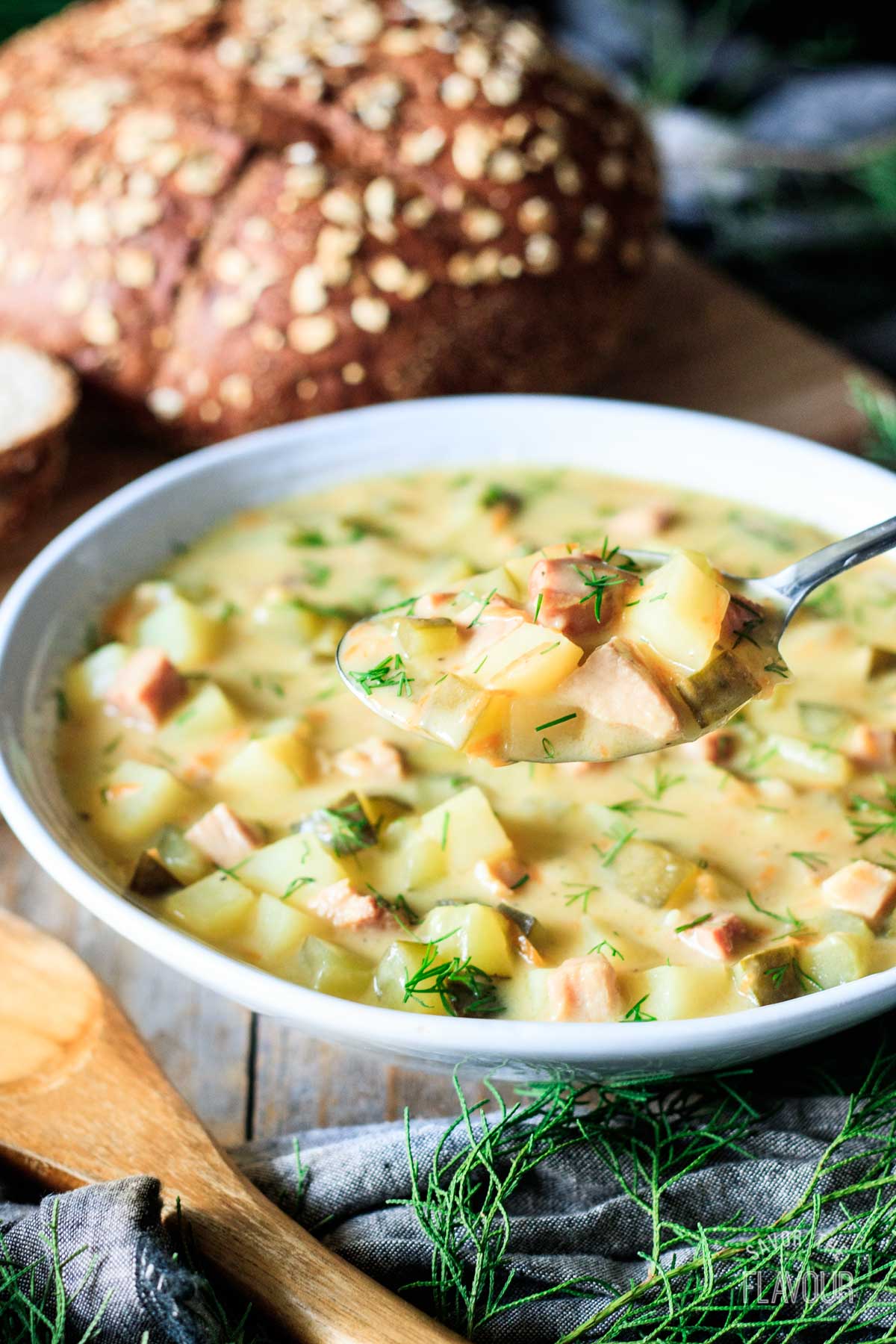 Can you make this in the crock pot?

Gather all the ingredients.  Chop the dill pickles, potatoes, and ham.  Slice the onion and grate a carrot. 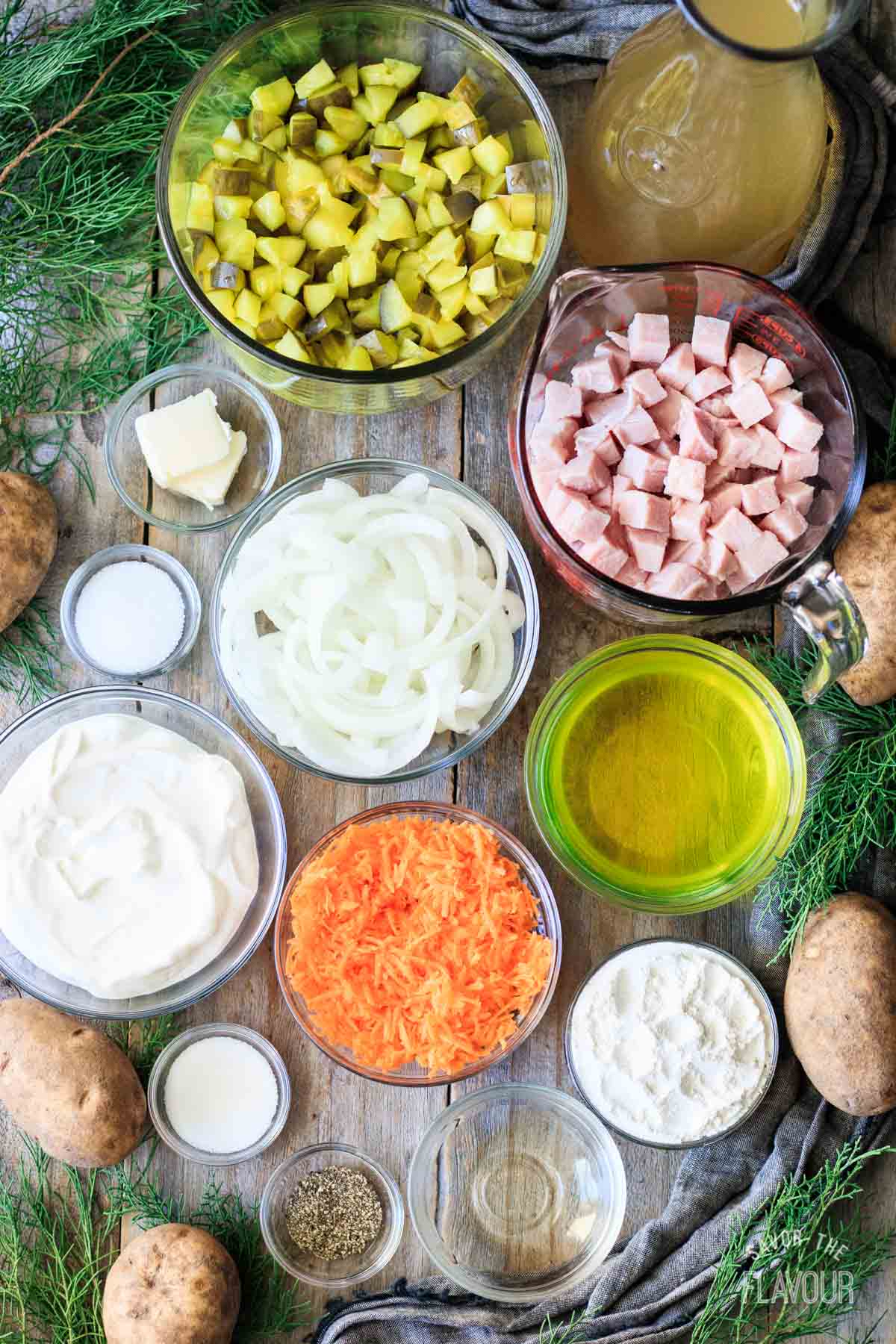 Melt the butter in a large Dutch oven, then sauté the sliced onion over medium low heat until it is starting to be caramelized. 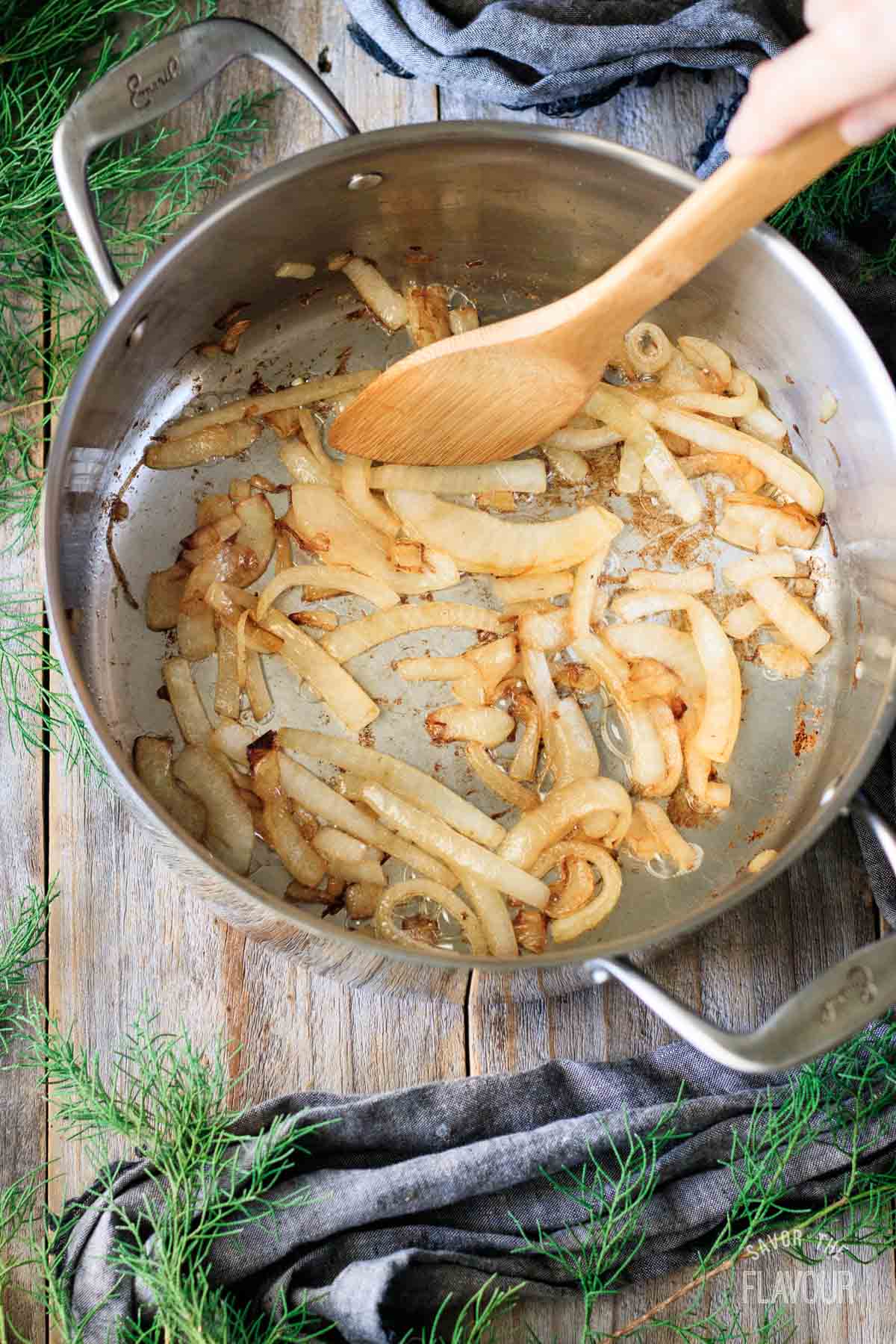 Deglaze the pan by pouring in ¼ cup of white wine and using a wooden turner to scrape off any browned bits from the bottom. 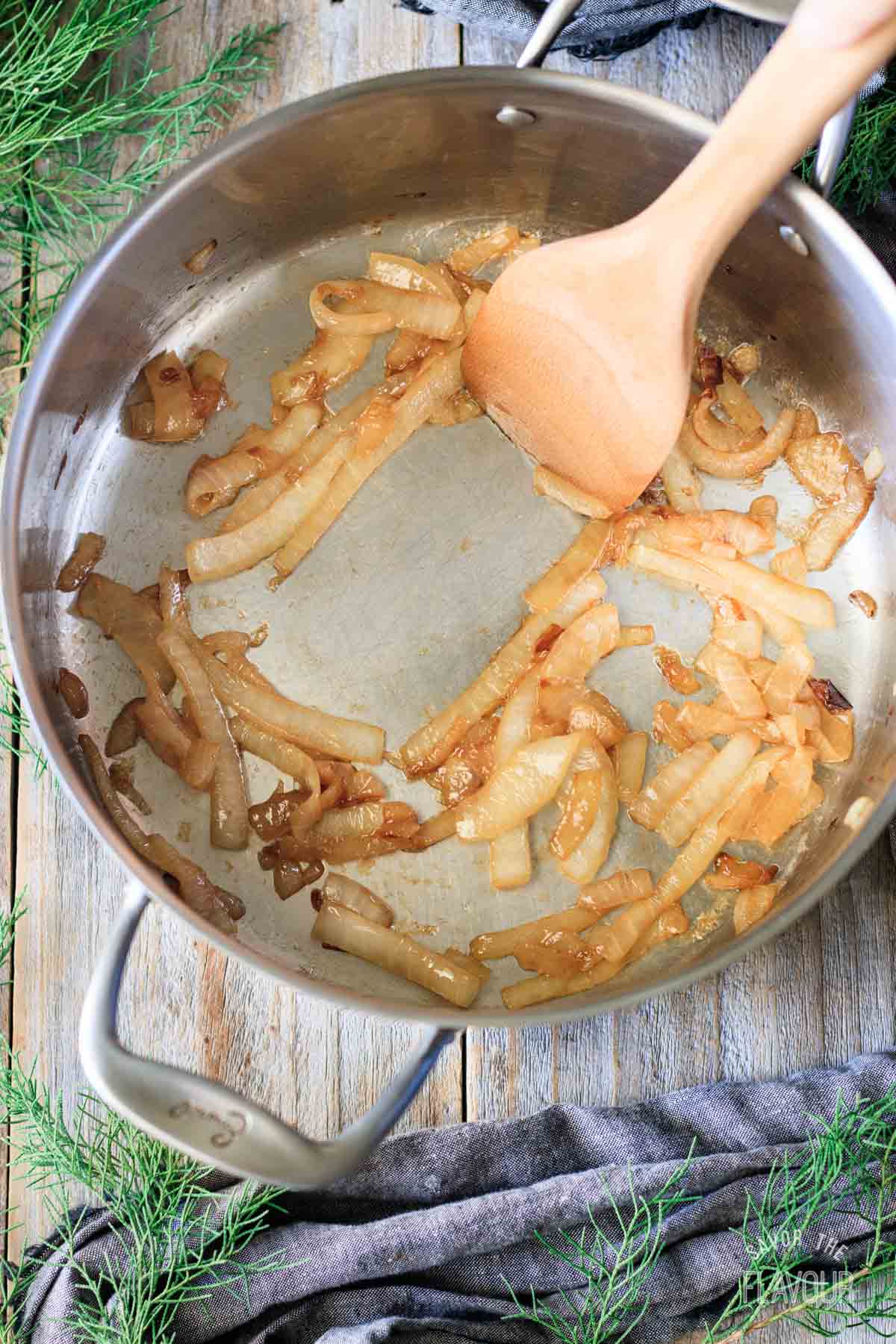 Pour in the unsalted chicken broth. 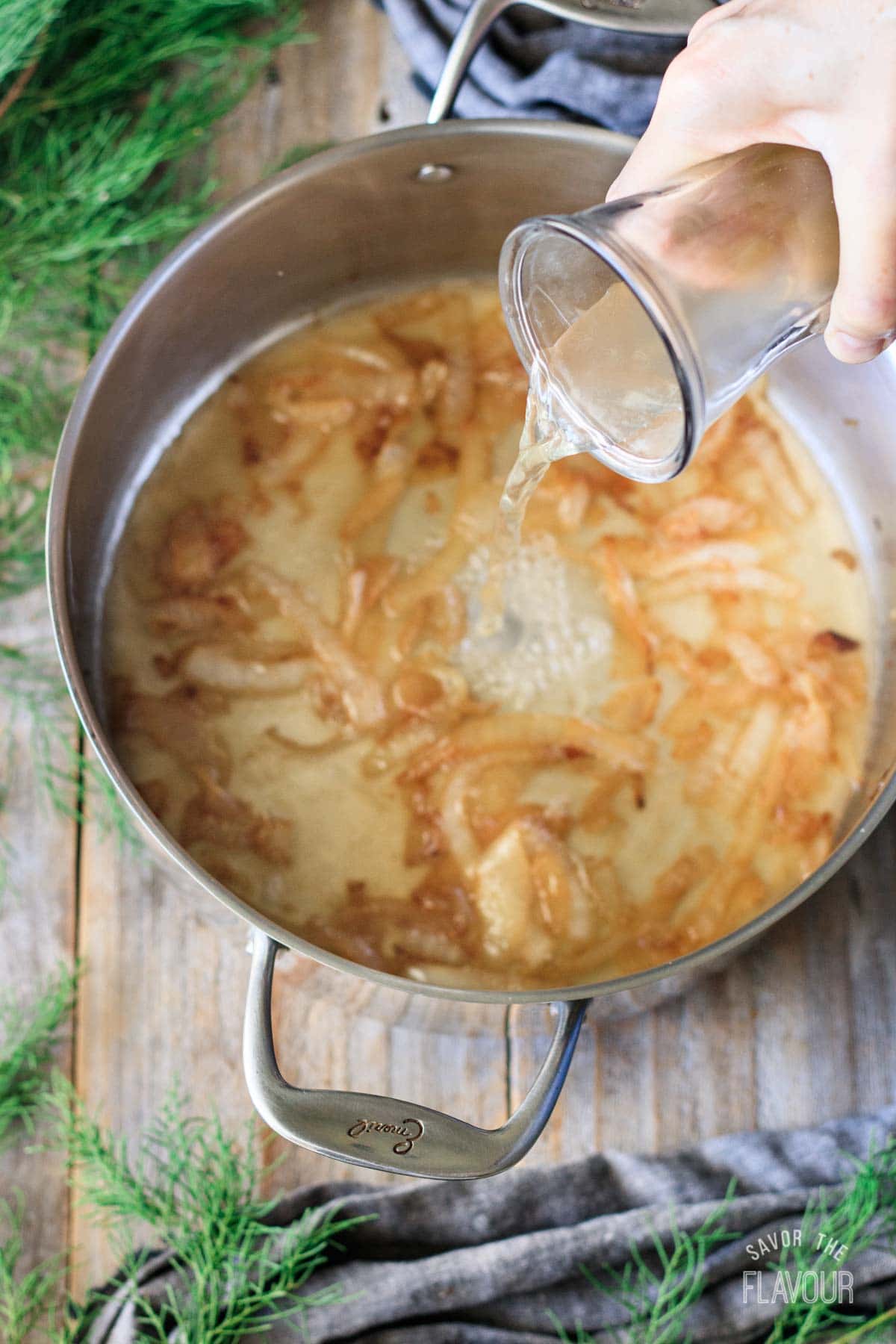 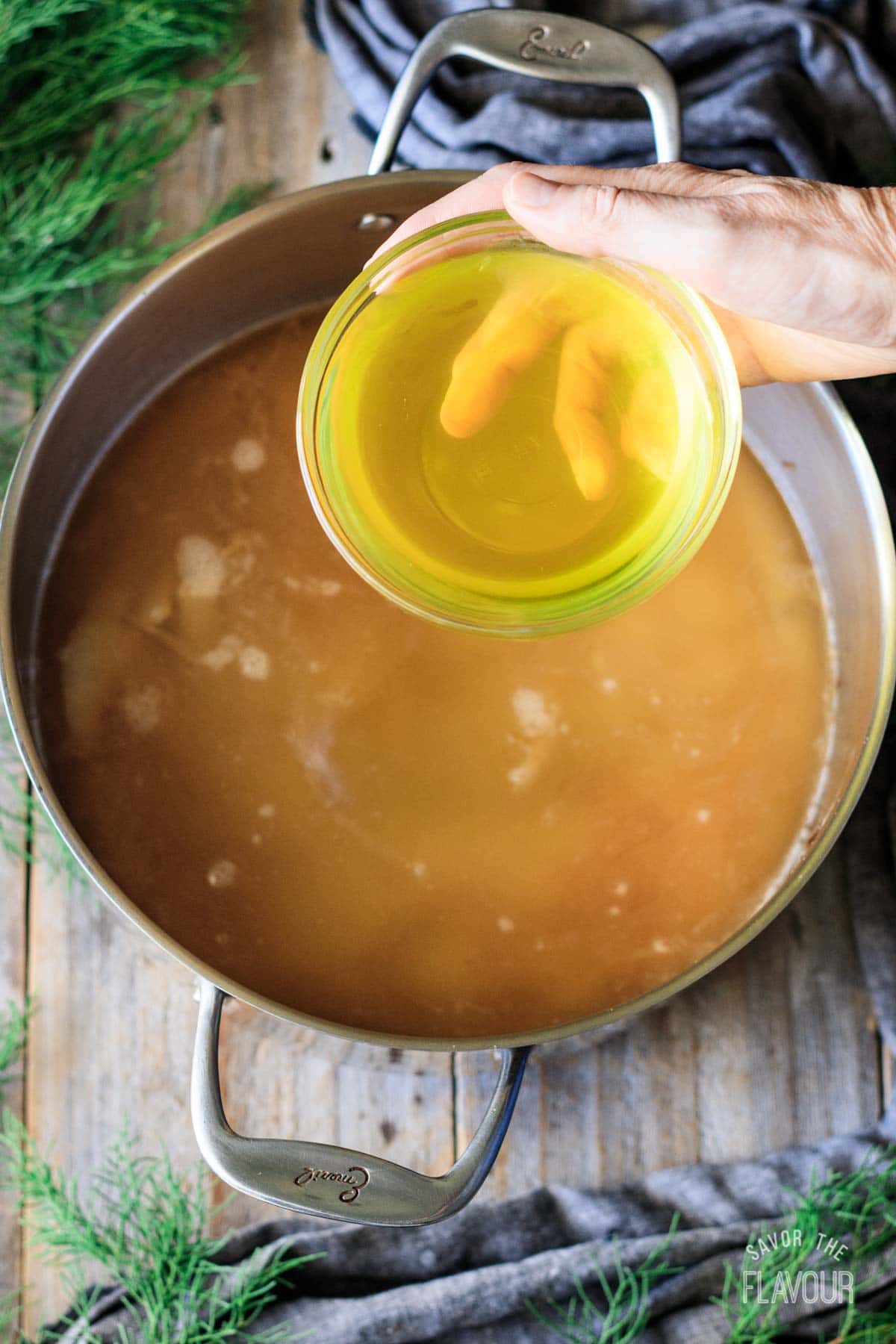 Dump in the chopped dill pickles. 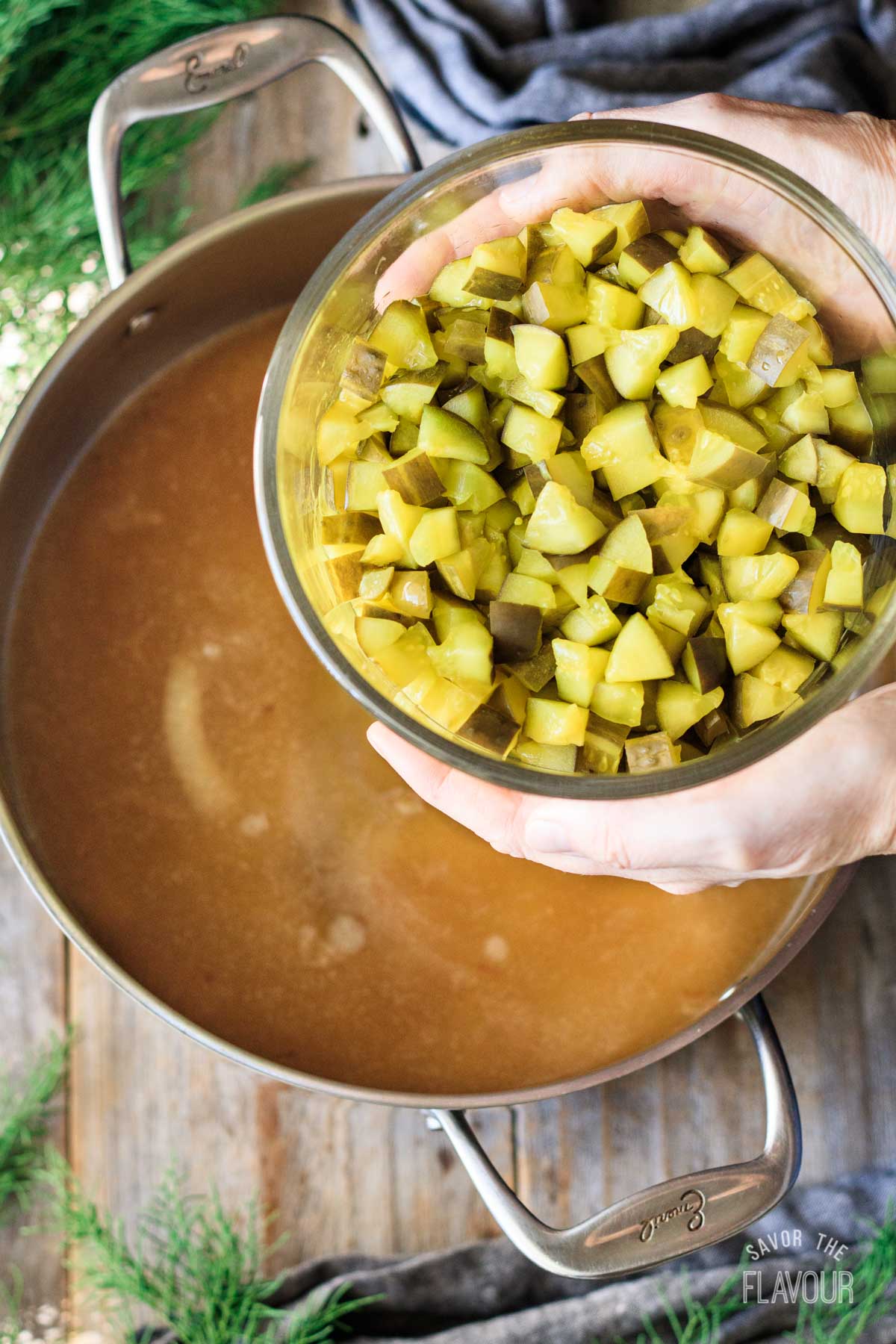 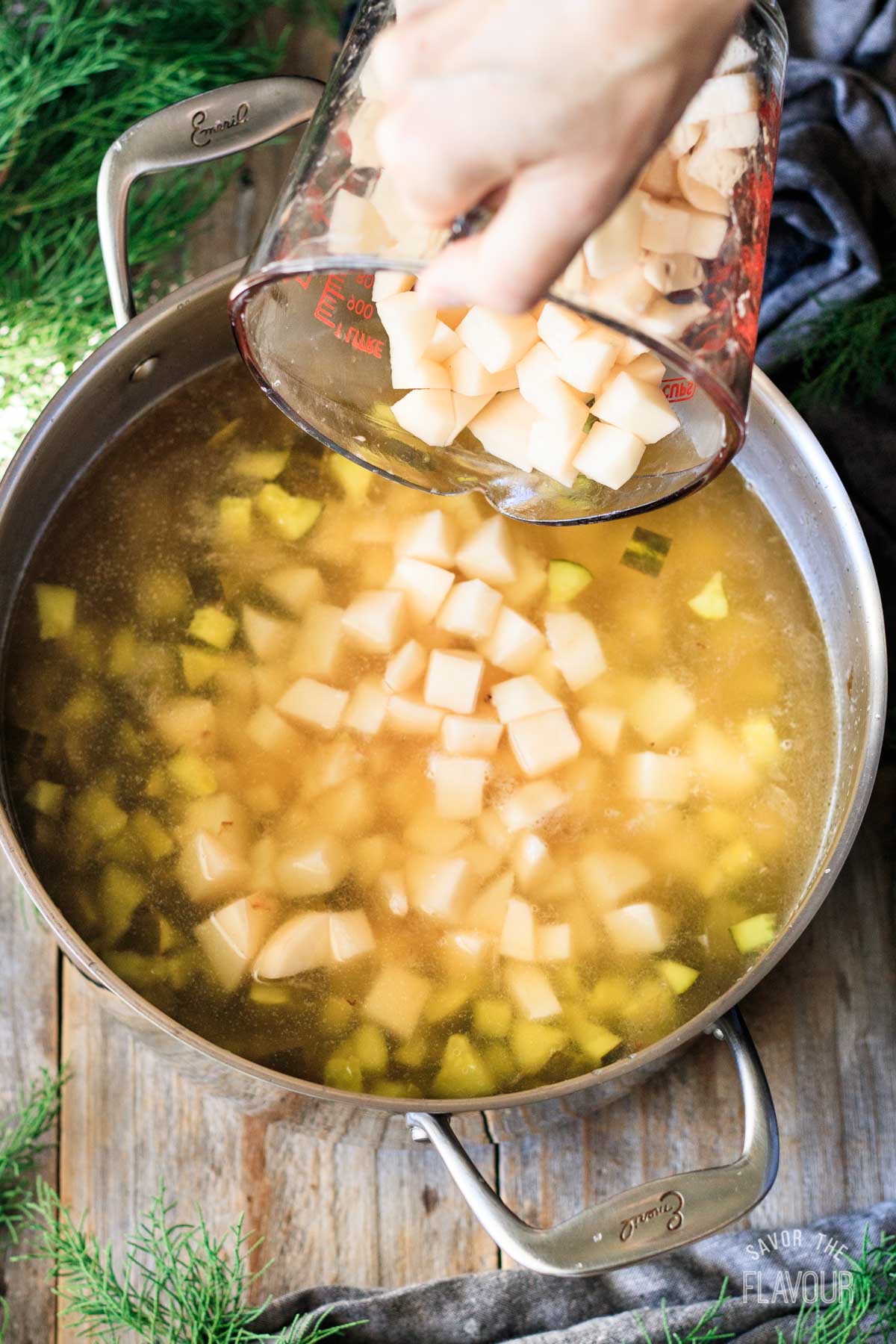 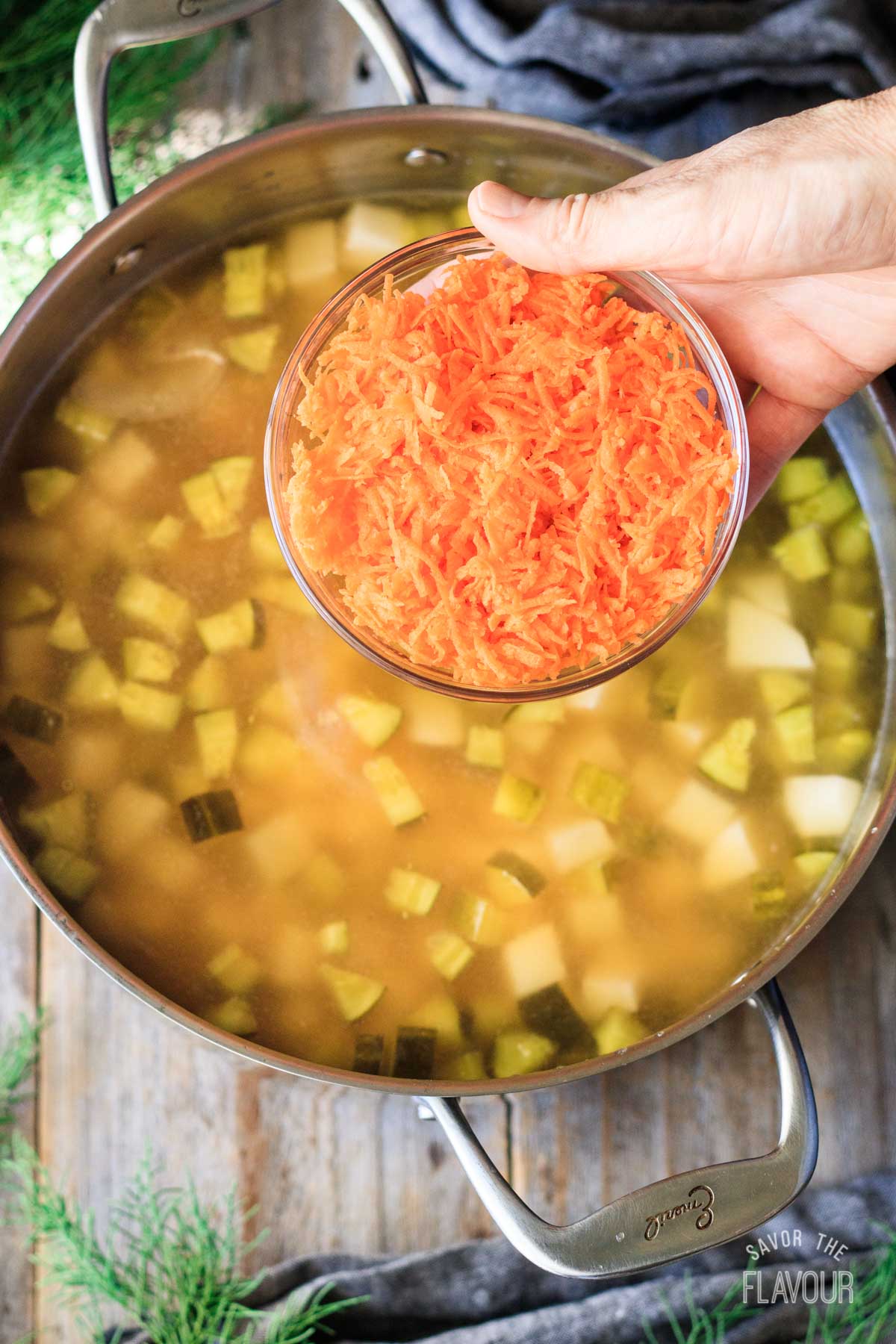 If you want, add 3 ½ cups of cubed ham to make it more hearty. 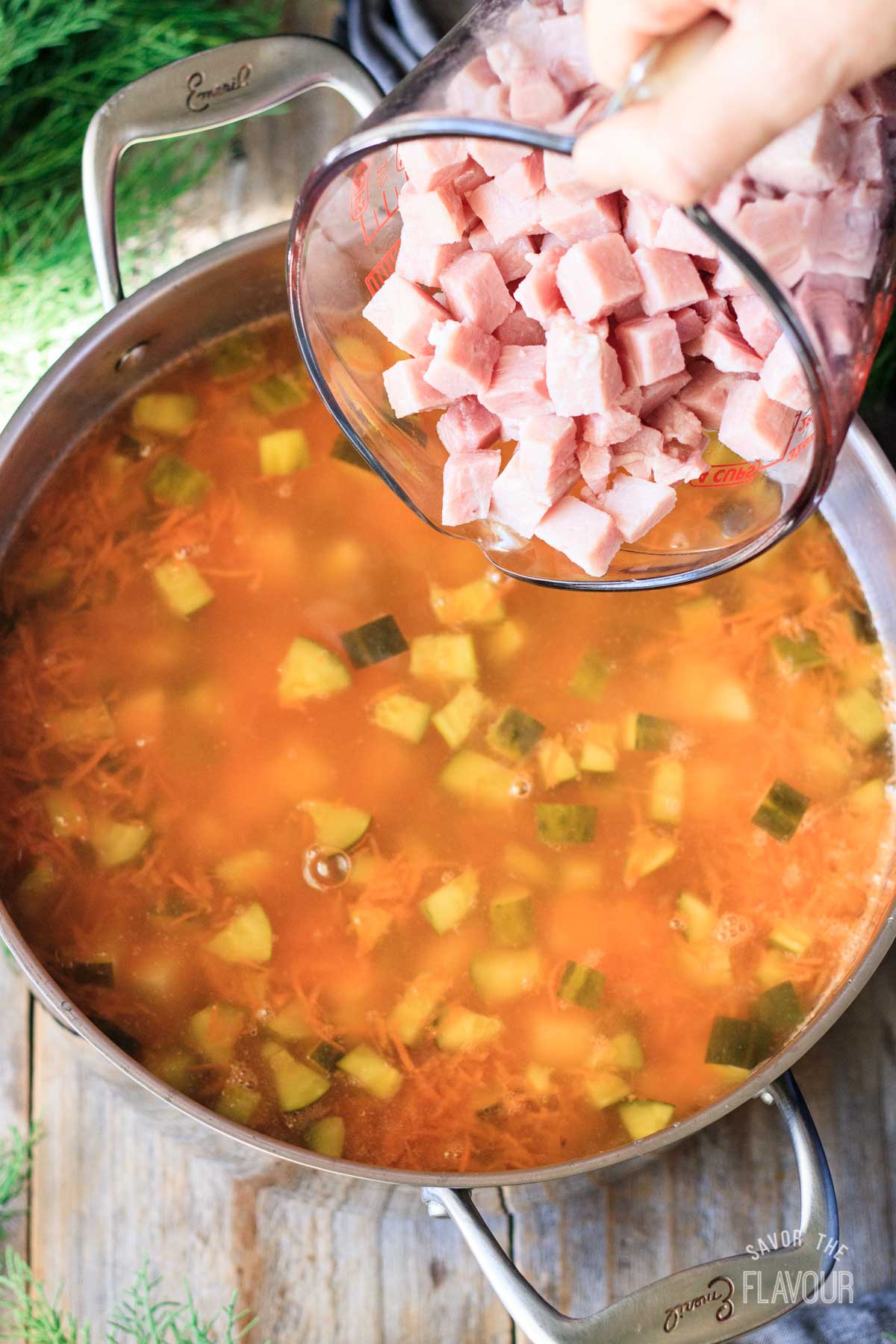 Stir all the ingredients together with a wooden spoon.  Cover the Dutch oven and bring it to a boil, then simmer until the potatoes are done. 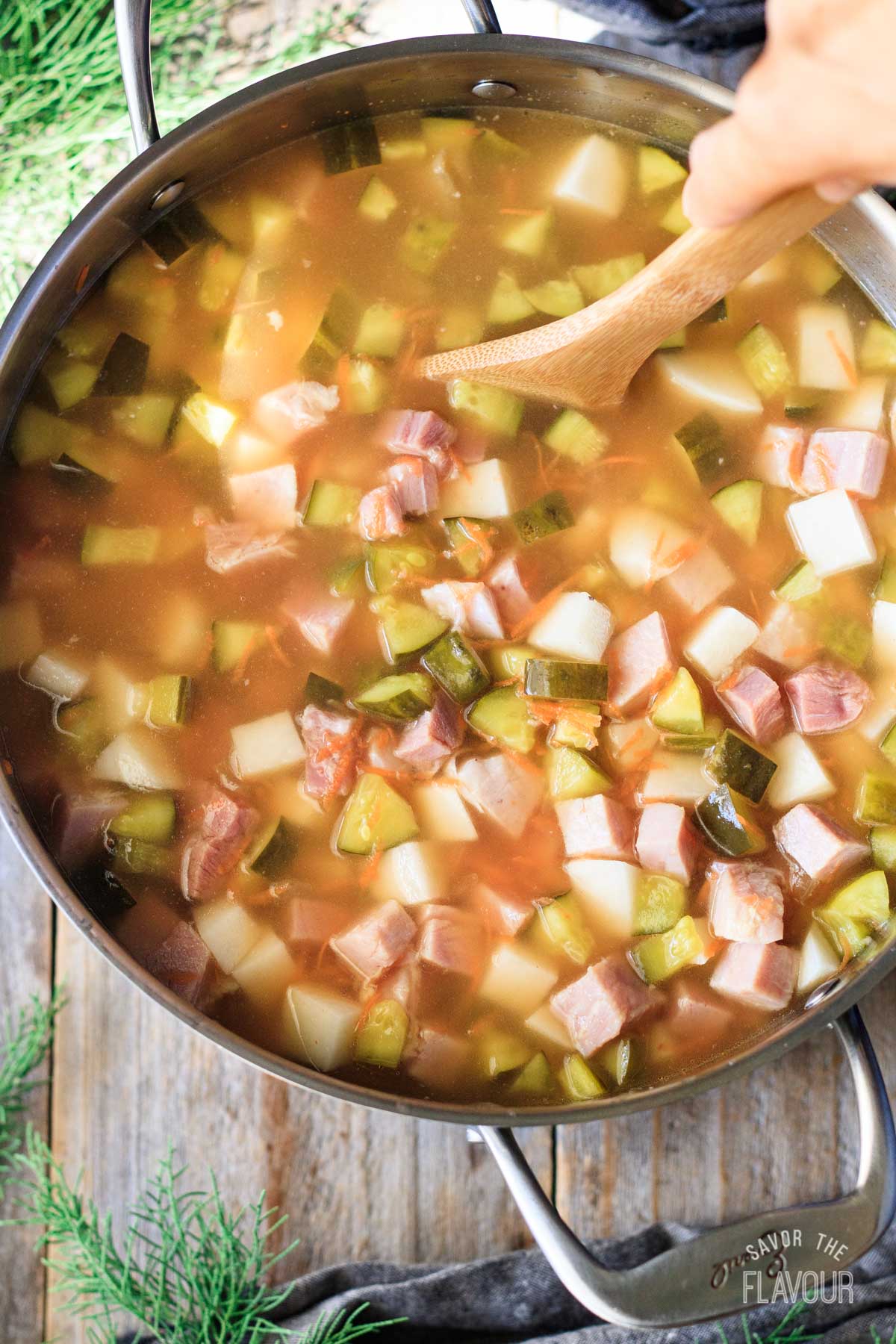 You'll know that the potatoes are cooked when you can poke them with a fork.  For this recipe, you don't want to overcook the potatoes. 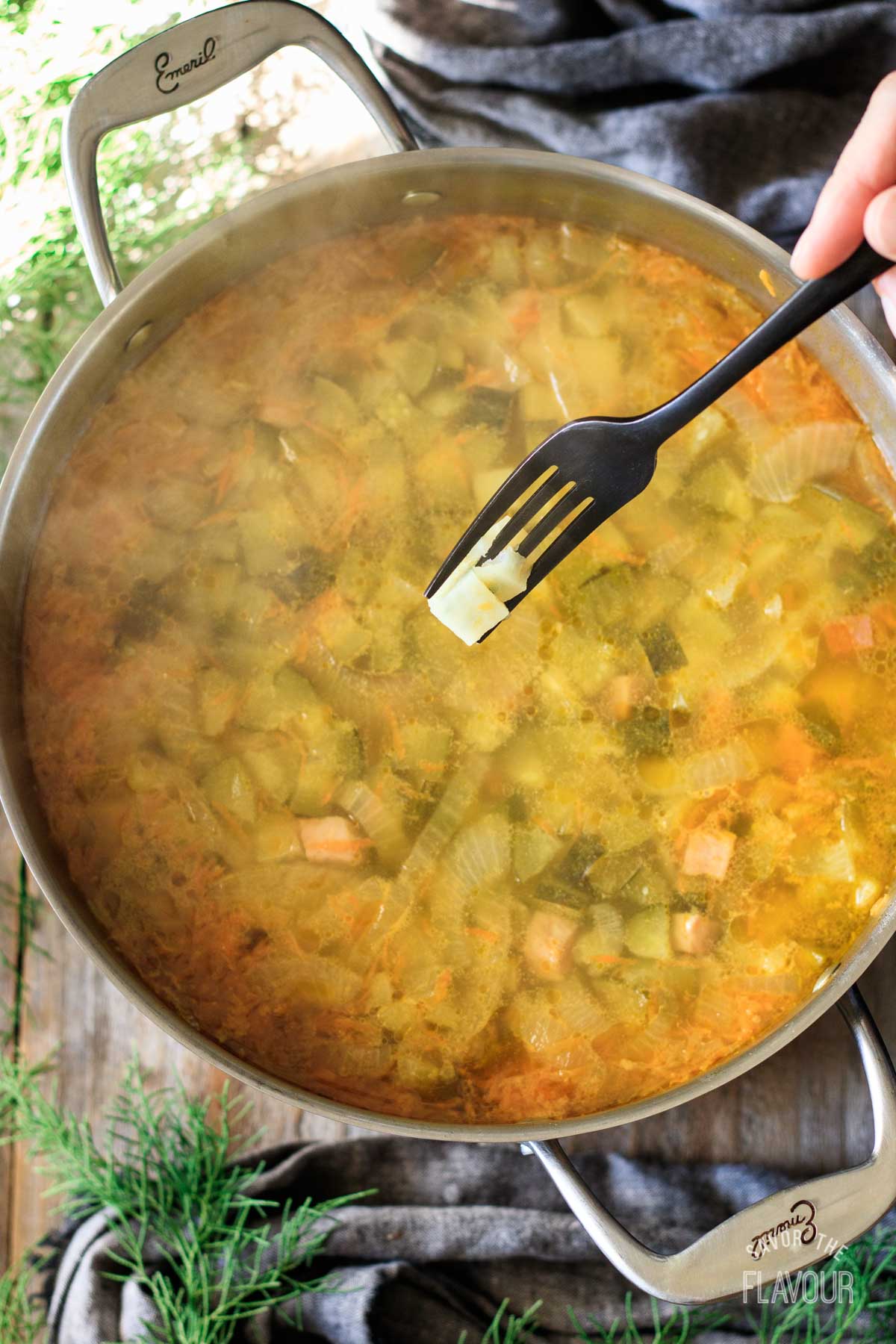 To help thicken it, gradually add ½ cup of flour to the 1 cup of sour cream. 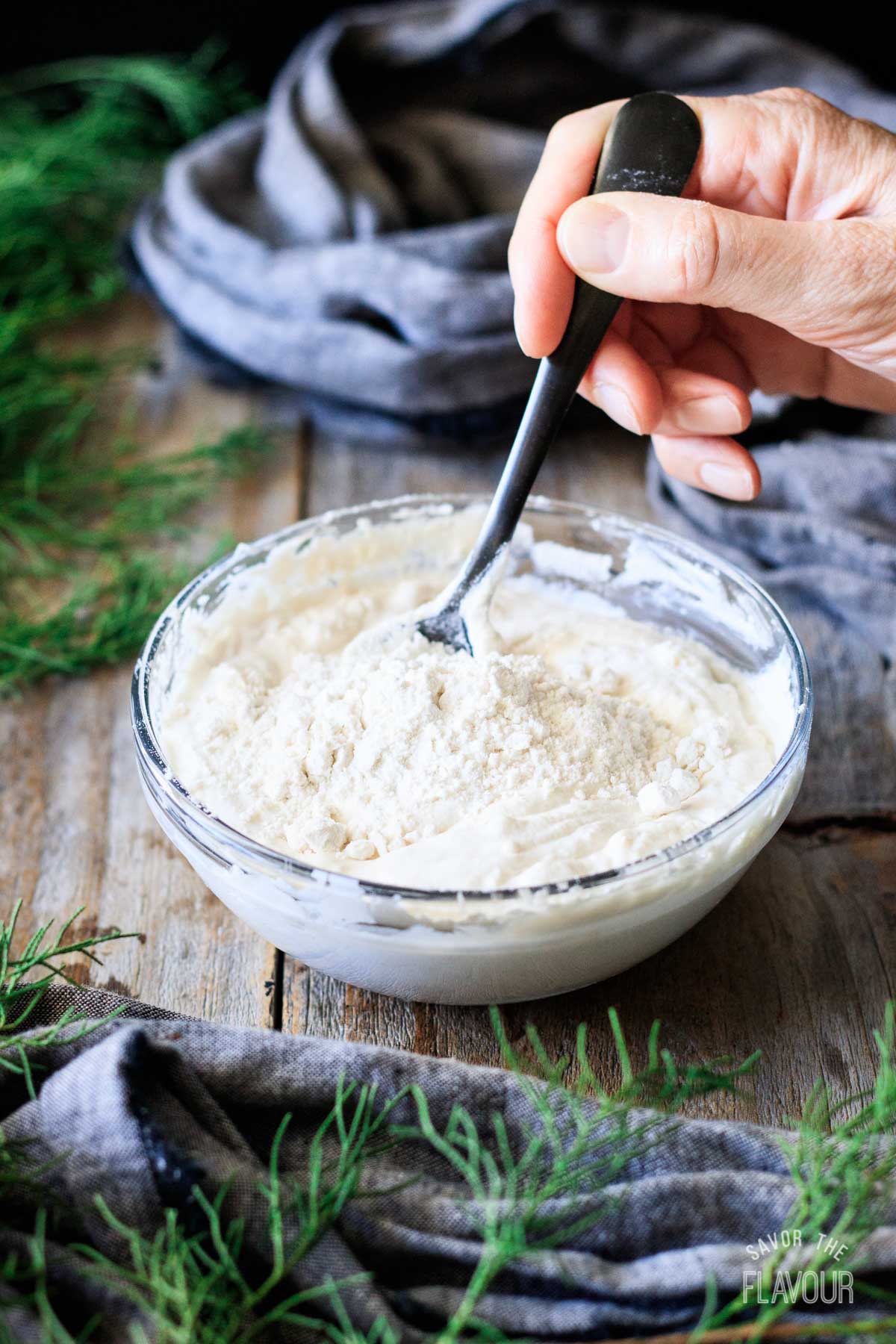 To temper the sour cream mixture, gradually whisk in 1 cup of the hot broth. 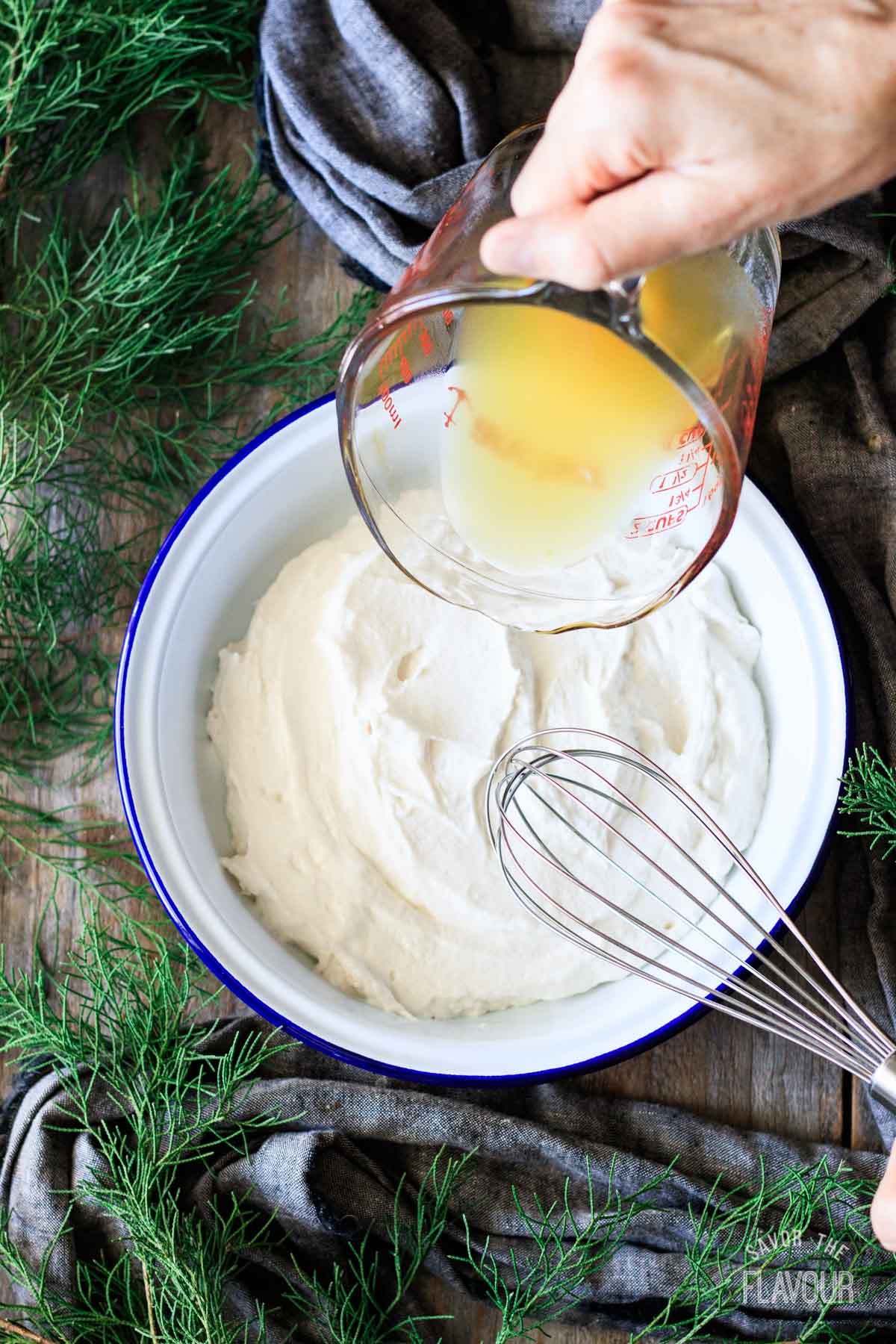 Add the tempered sour cream to the soup. 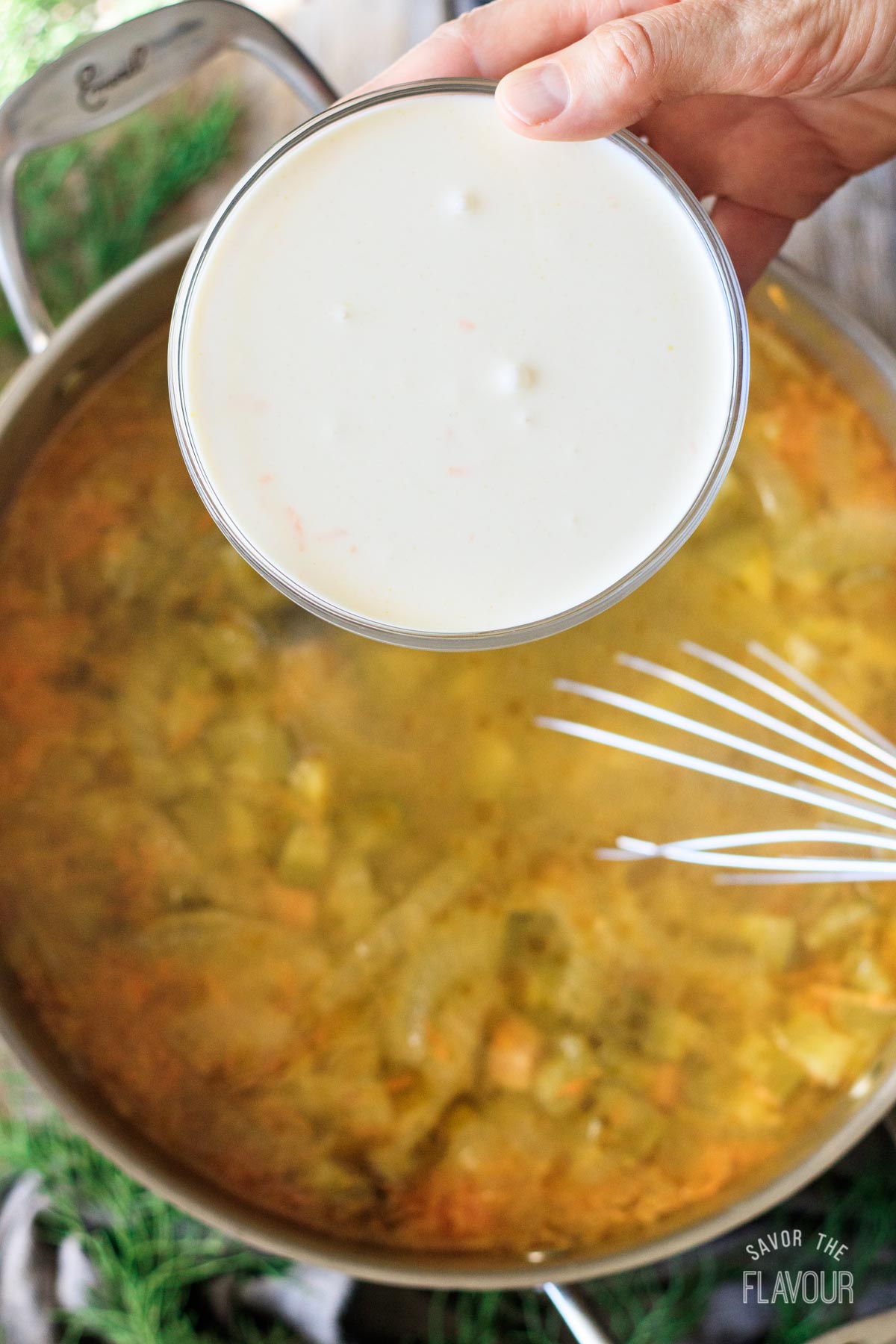 Whisk the sour cream mixture into the soup to help thicken it and make it creamy. 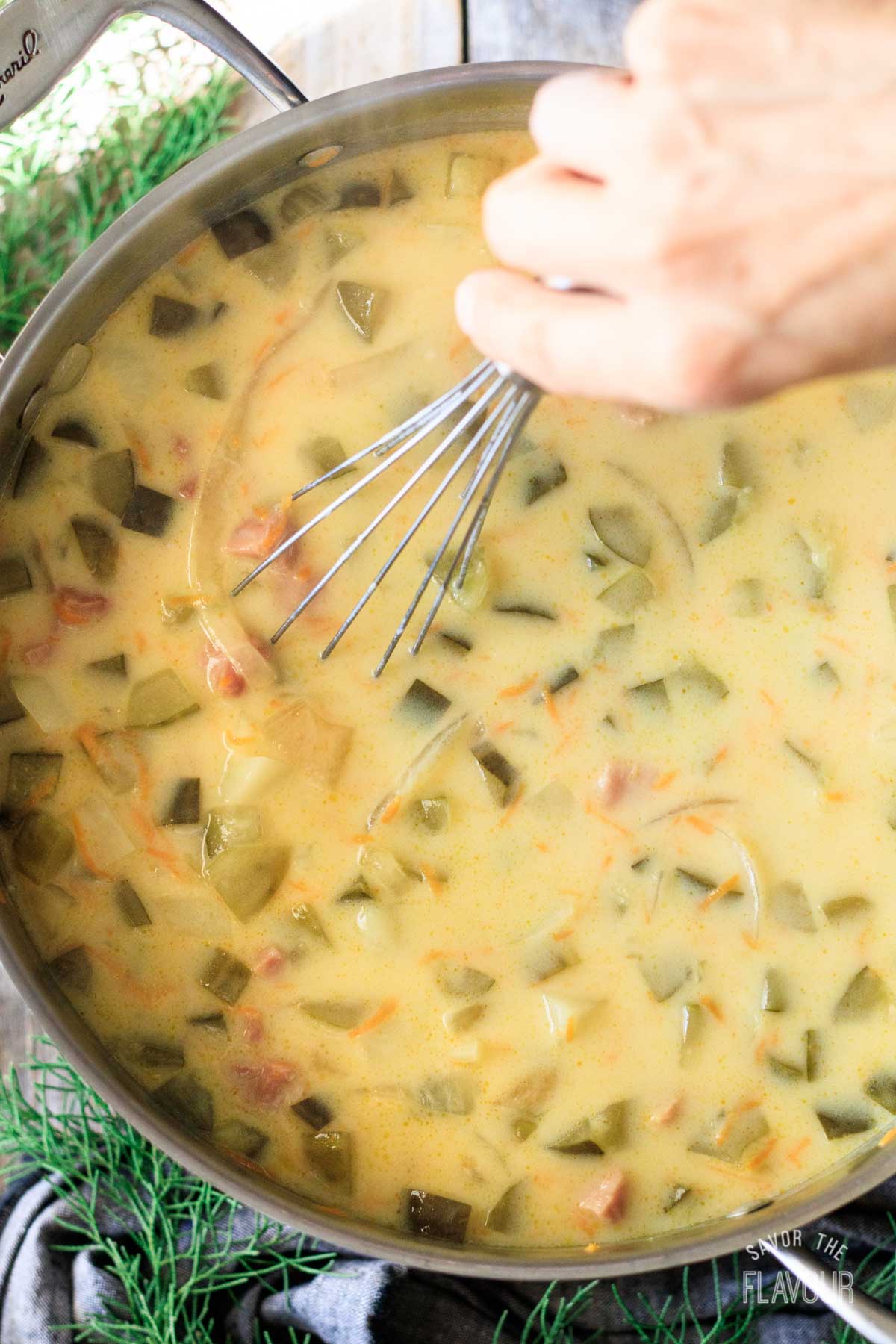 Taste it and then add your spices.  Here I have sugar to balance the acidity, along with black pepper and salt.  You might feel the extra salt is unnecessary.   Stir the spices in and let it simmer 5 minutes. 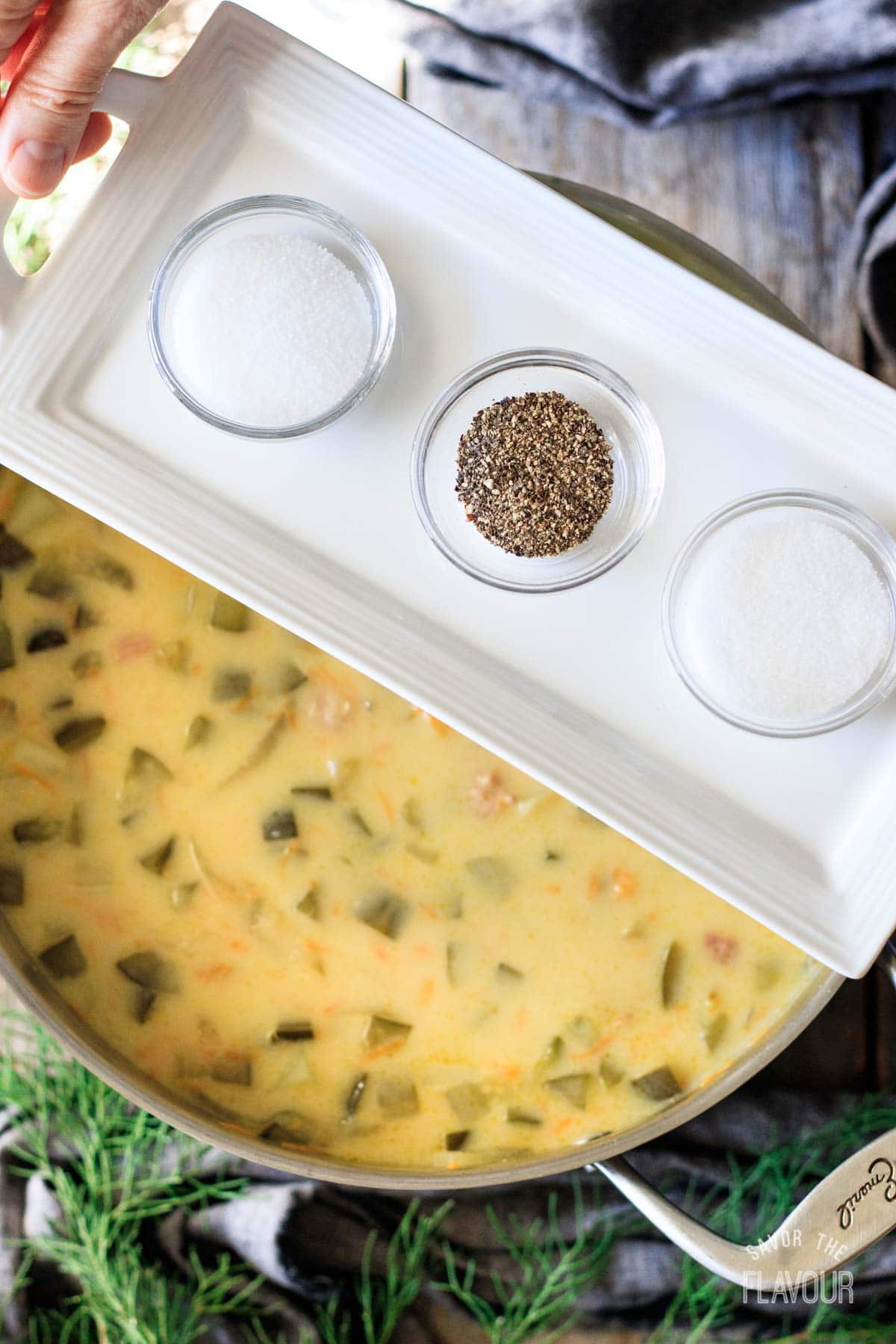 Your dill pickle soup is now ready for a few garnishes.  Add some fresh dill, a drizzle of sour cream, a few pickle coins, or a good sprinkle of freshly ground black pepper.

If you love dill pickles and potatoes, you will love this soup.  I encourage you to give it a try.  It will definitely be a good conversation starter with your co-workers and friends when you tell them you made a big pot of dill pickle soup. 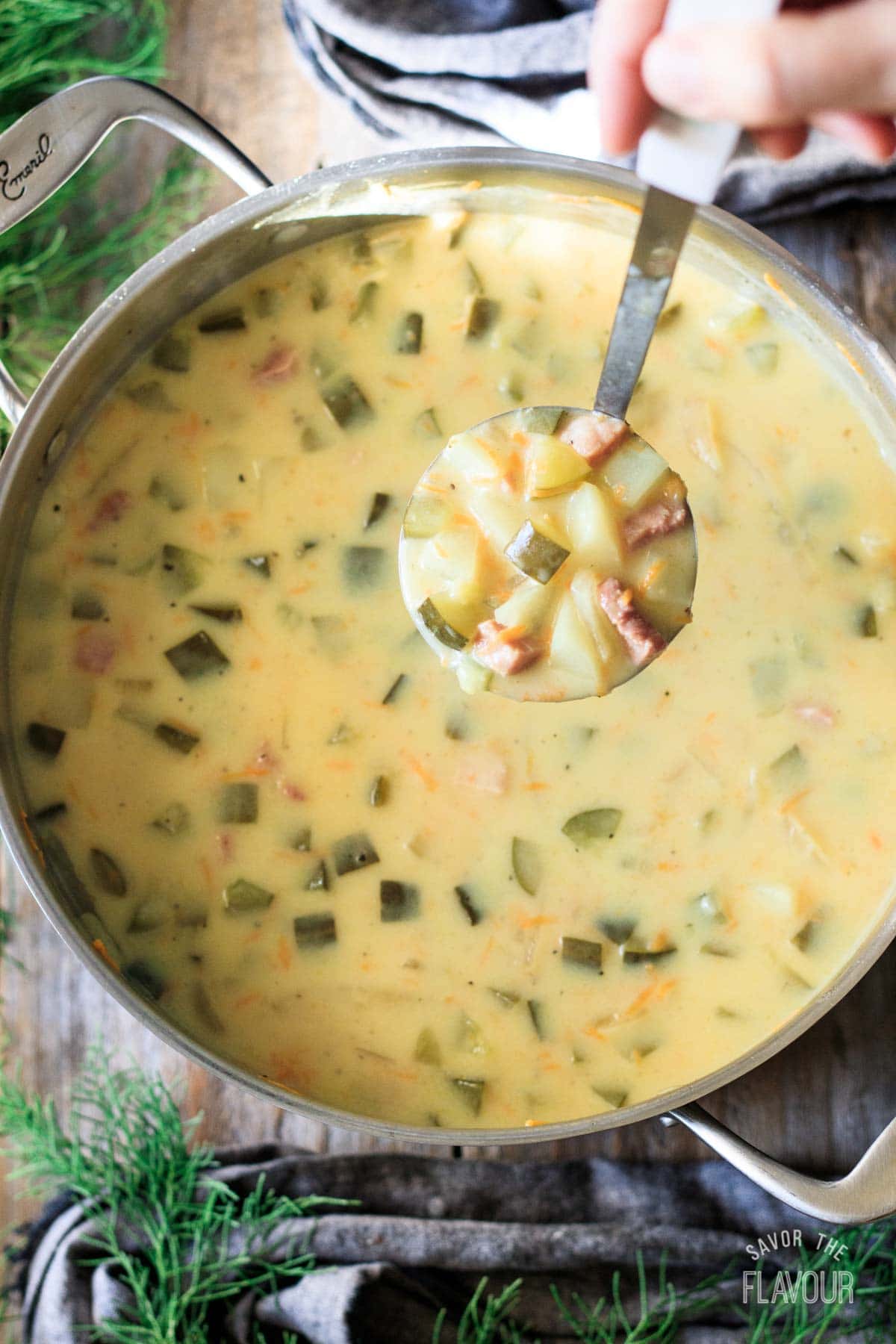 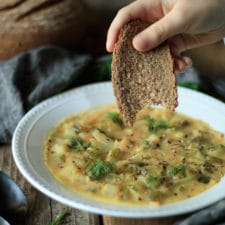 This recipe was originally published on January 16, 2018.