Do you love Chick-fil-A's mac and cheese, but don't want to break the bank? Learn how to make our easy copycat recipe with no roux. A special blend of 5 cheeses gives you the creamiest, cheesiest sauce ever.

Want to round out your meal? Try these healthier Chick-fil-A copycat recipes for market salad and fruit cup.

The majority of the ingredients for our copycat Chick-fil-A mac and cheese are easy to find at your local grocery store. The exceptions are the white American cheese (Deli section) and the Bella Vinto cheese, which are found at a more upscale grocery store, and the food-grade sodium citrate can be purchased online through Amazon.

Cook the 2 cups of pasta in 2 quarts of salted boiling water for 1 minute less than the package instructions. (If you want soft, large pasta, cook for 20 minutes.) Drain, but don't rinse, and set aside to cool for at least 5 minutes. If the pasta is too hot the sauce won't stick.

3. Reduce the heat to low and add the grated American cheese a handful at a time. This cheese melts the easiest. Whisk until it is melted.

4. Repeat with the other 4 cheeses.

5. Whisk in the paprika and turmeric for a little color and flavor. Taste and adjust seasonings, adding salt to taste. Allow the sauce to cool and thicken for 5 to 10 minutes. Slowly add the cooked and cooled pasta to the cheese sauce and stir to coat. There should be a good ratio of sauce to pasta.

6. Preheat the broiler to high. Divide the copycat Chick-fil-A mac and cheese evenly between the four buttered ramekins (roughly 220g per dish). You can also use a buttered 8x8-inch baking pan. Sprinkle the American and cheddar on top.

7. Broil for 2 minutes or until you have the color you want. This step will brown and melt the cheese on top and make it crispy.

Is the mac and cheese at Chick-fil-A good?

Most CFA reviewers agree that this mac and cheese has the taste of real cheese. The sauce is rich and creamy with a prominent cheddar flavor. The sauce has an appealing orange hue and no separation, and it sticks well to the pasta. However, many adults consider the macaroni to be overcooked and mushy. The crispy baked cheese is very satisfying, and overall it tastes best if eaten right away.

How many calories are in Chick-fil-A's mac and cheese?

For a medium serving size (206g), there are 450 calories and 29g fat.
For a similar serving size, our copycat recipe has 567 calories (due to the 5 cheeses and whole milk) and 31g fat. For more nutritional information, please scroll to the end of the recipe card.

What is in Chick-fil-A's mac and cheese?

Chick-fil-A sums it up best on their website, describing it as a classic macaroni and cheese recipe featuring a special blend of cheeses including Parmesan, Cheddar and Romano. Baked-in the restaurant to form a crispy top layer of baked cheese.

Is Chick-fil-A's mac and cheese healthy?

Unfortunately, it happens to be the least healthiest side dish on their menu with more calories and fat than their famous waffle fries. They also list processed cheese as their second ingredient and use margarine. If you crave mac and cheese, you're better off making your own, so you can use real ingredients that are fresh and simple.

At this famous fast food chicken restaurant, they sell their mac and cheese as a stand-alone side item, in small and medium size, so it's not specifically paired with something else.

At home, this can be served as an entree or a side. To round out the meal, this should be served with healthier choices which are low in calories and fat, like grilled chicken breast, crisp green salad, and fresh fruit.

Make Ahead: Use heavy cream instead of whole milk, as it helps keep the sauce creamy when reheating. Make only the cheese sauce ahead of time.

Leftovers: If you have any leftovers, store them in an airtight container in the fridge for up to 3 or 4 days.

Reheat: Reheat the ramekins with foil on top in a 350°F oven until heated through.

Freeze: This entree has 5 kinds of cheese plus whole milk, so the sauce will not be the same once it is frozen and reheated. The pasta will also be very mushy, so for the best taste, make a smaller batch and eat it all up when it's still fresh. 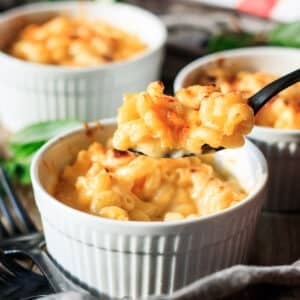 For the Cheese Sauce

Our Chick-Fil-A mac and cheese recipe was originally published on October 13, 2021 and was updated on November 4, 2022.