Your kids will devour it, and with one taste you'll agree it's like a hug in a skillet.  My girls are mightily fond of this easy shepherd's pie recipe, so they are always excited to hear it's on the menu. 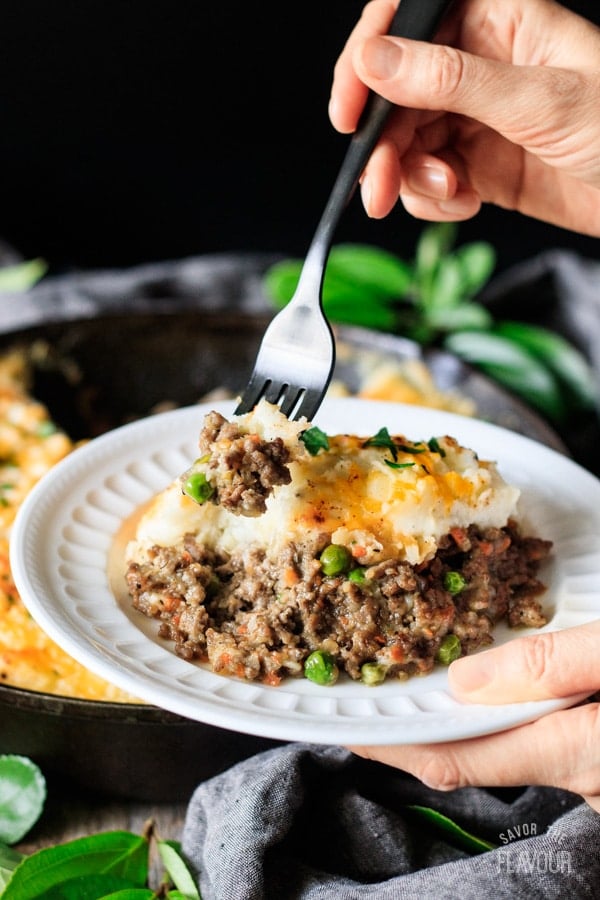 What is the difference between shepherd's pie and cottage pie?

What is shepherd's pie?

Shepherd's pie is a dish that meat and potato lovers drool over.  It's a classic cold weather comfort food.

The base is a meat and vegetable mixture that is topped with fluffy homemade potatoes and baked in the oven until it's golden brown on top.  Traditionally, there isn't any pastry in the dish at all, but if you're up for a twist it would taste divine with pastry on top. 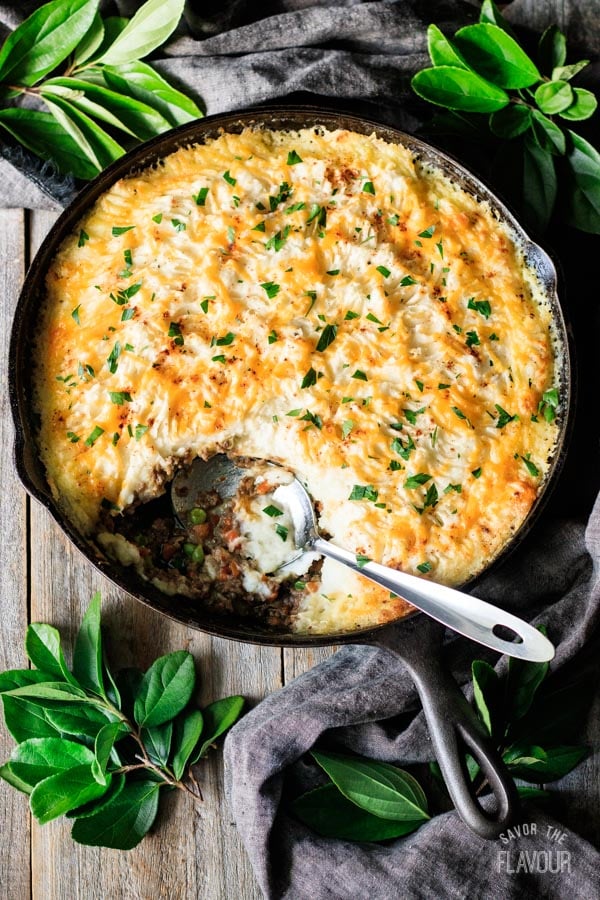 Can I prepare shepherd's pie in advance?

Certainly!  This an excellent make ahead recipe.  All of it can be made ahead of time.

When ready, cover the skillet or your casserole dish with foil and refrigerate.  While the oven is preheating, take out the shepherd's pie and let it sit on the counter.

Increase the cooking time to 40 minutes and broil for 3 minutes to get the textured potatoes extra crispy.  You can also make it on a Monday using leftovers from Sunday's pot roast dinner.  If you choose this option, use 4 cups of mashed potatoes, 1 cup of gravy, and 3 cups of shredded pot roast. 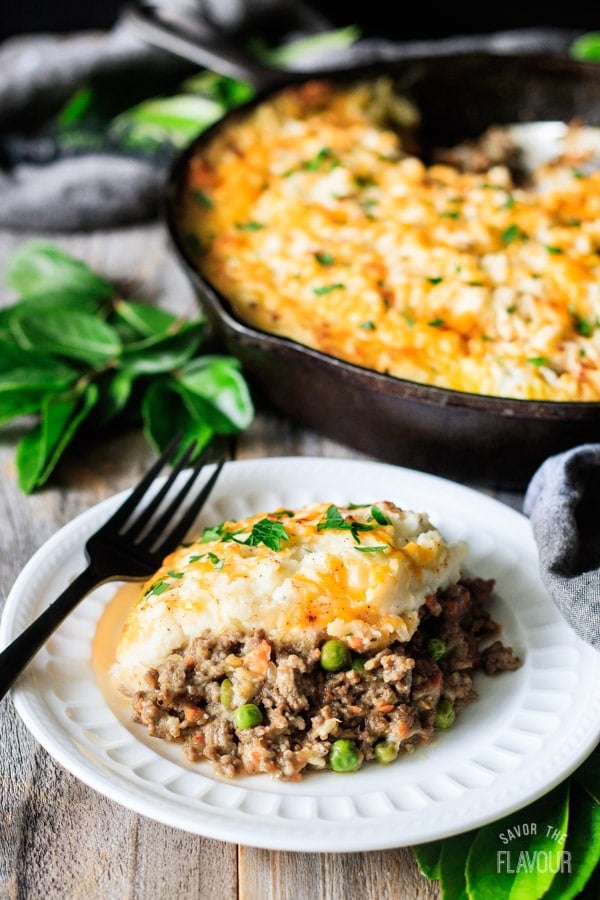 Can I freeze shepherd's pie?

Yes, this recipe freezes really well.  It's best to freeze it before you bake it.

If you are planning on freezing it, assemble it in a 9x13-inch pan and not a cast iron skillet.  Wrap the pan in foil so it's airtight and won't get freezer burn, then freeze for up to 2 months.

When ready to eat, thaw in the fridge overnight.  If it's completely thawed, bake at 400 F for 40 minutes and broil for 3 minutes.

If it's partially frozen, increase the cook time to 1 hour and 10 minutes and cook it on the bottom rack.  When it's done it should be golden brown on top and heated all the way through so the filling is steaming hot. 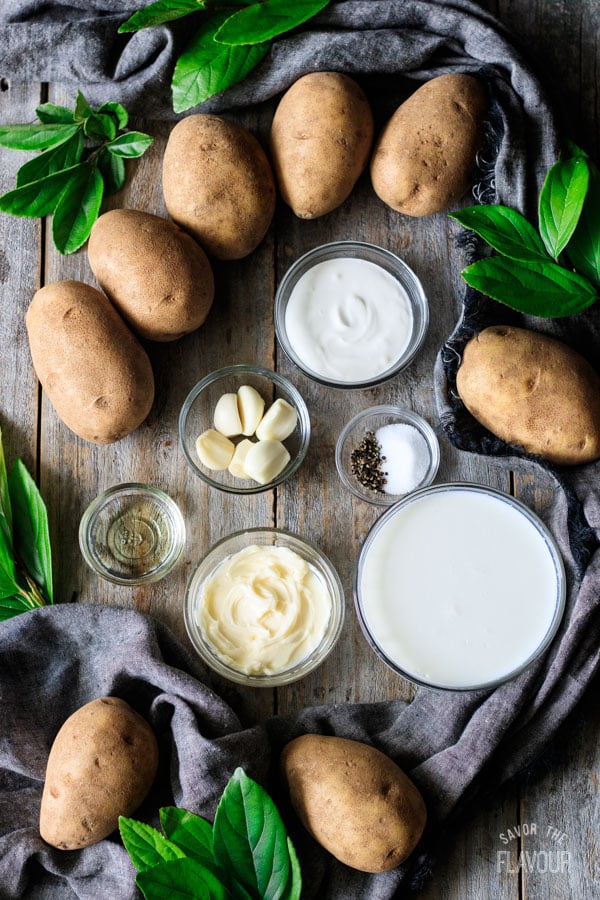 To roast the garlic, rub olive oil on the 5 large peeled cloves and bake for 15 to 18 minutes at 425 F.  Once cooled, smash the garlic with a bottom of a cup. 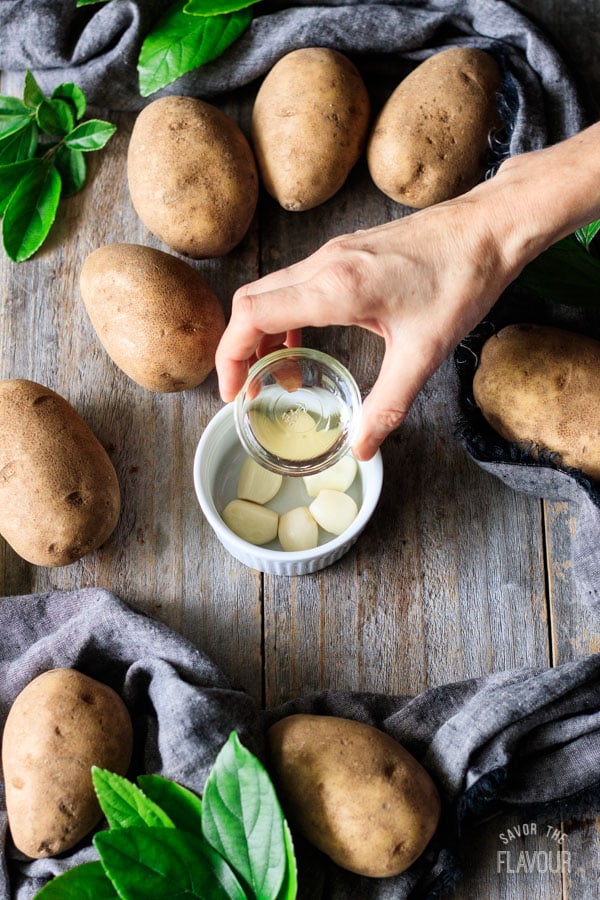 Wash, peel, and cube the potatoes.  Place in a large pot of cold water.  Bring to a boil then simmer until fork tender, then drain. 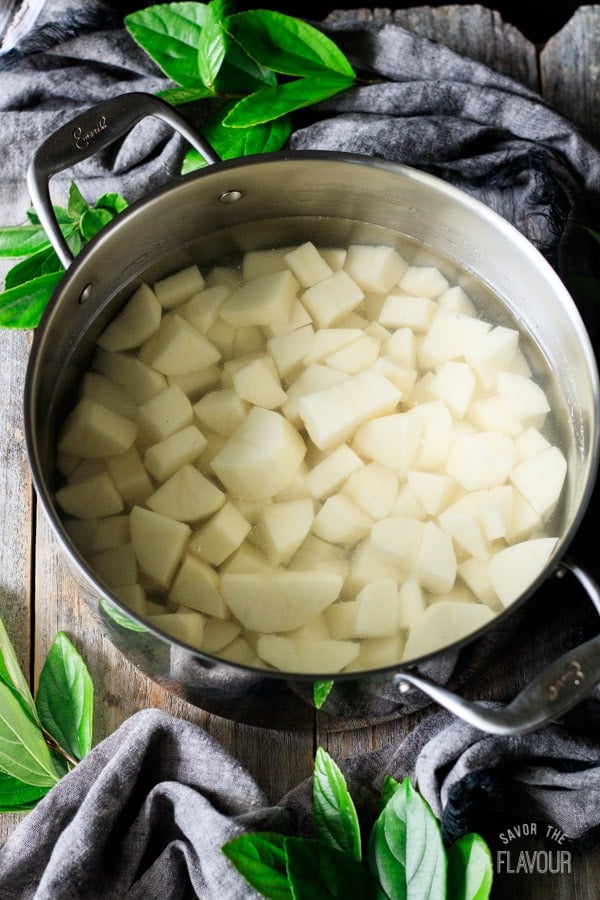 Mix the potatoes in the bowl of a standing mixer with the butter, smashed roasted garlic, sour cream, buttermilk, salt and pepper. 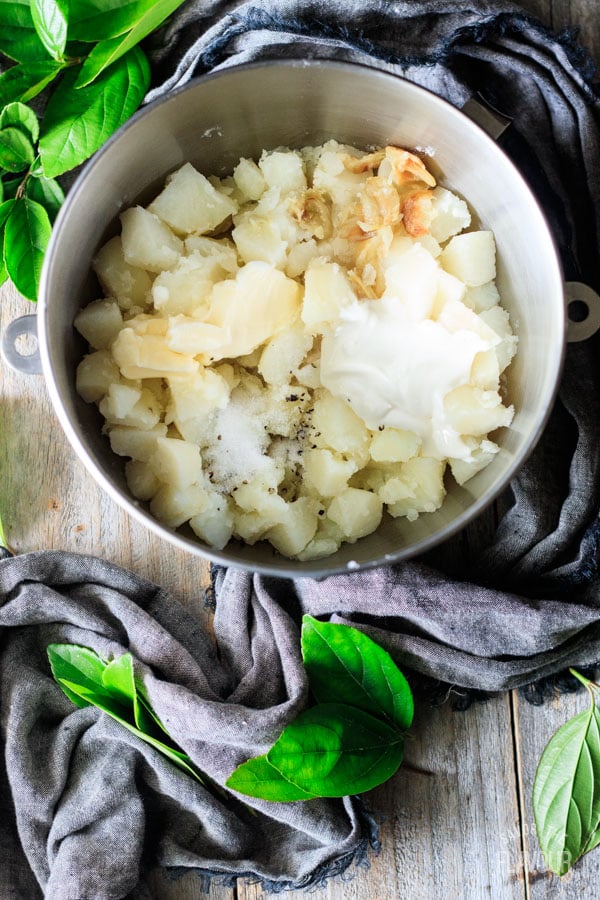 Whip until smooth and adjust seasonings according to taste. 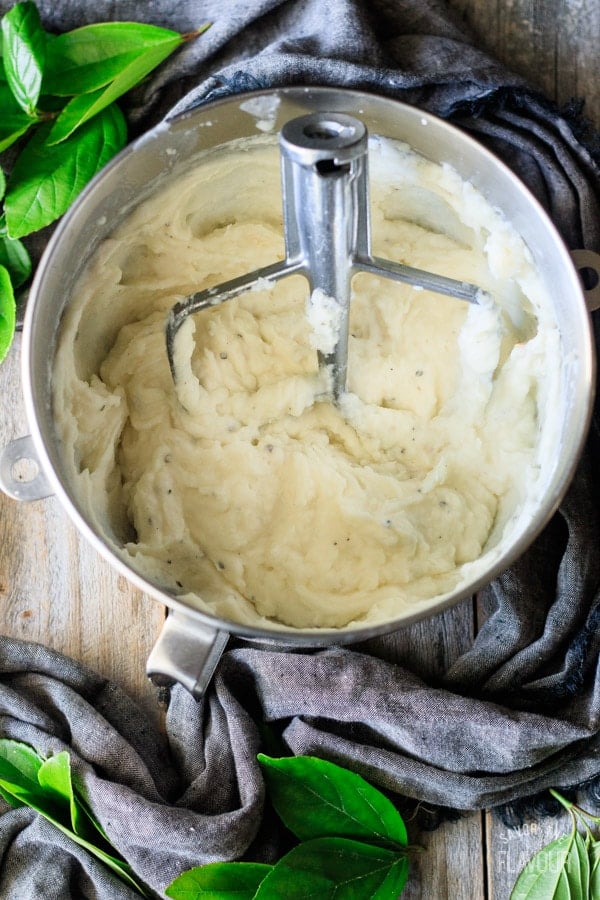 Gather the ingredients for the meat and vegetable mixture.  Finely chop the carrot, onion, and garlic.  I used frozen peas for ease, but fresh would also work. 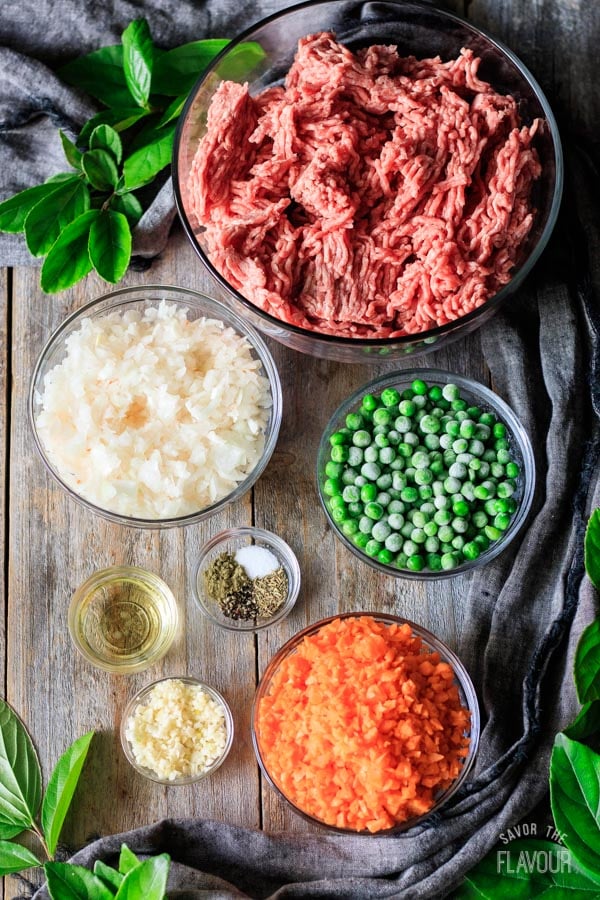 Heat the olive oil over medium-high heat in a cast iron skillet and cook the ground beef until it's no longer pink inside.  Break up the pieces as it cooks with a wooden tuner or spoon.  Drain in a colander over a bowl or use a large slotted spoon. 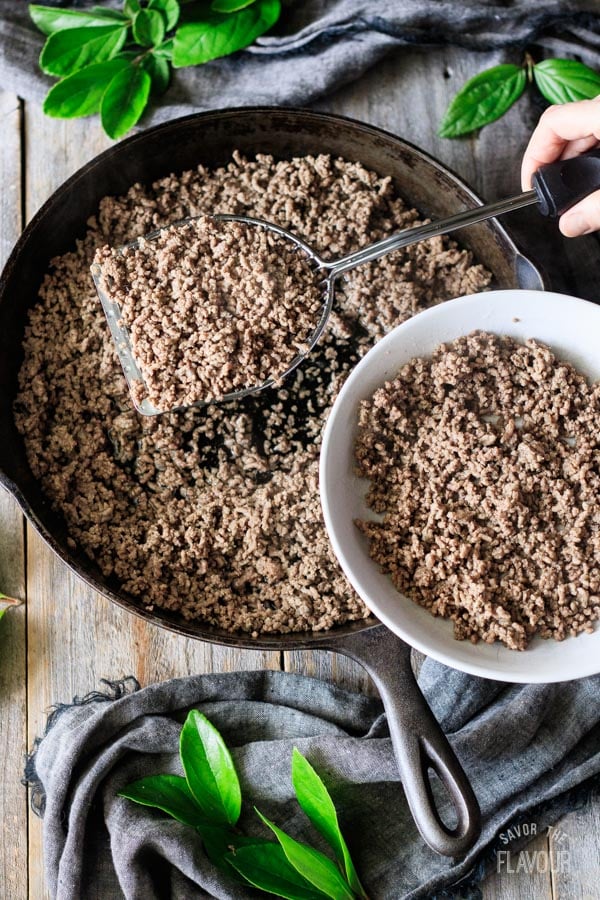 Wipe out most of the remaining fat from the ground beef with paper towel. 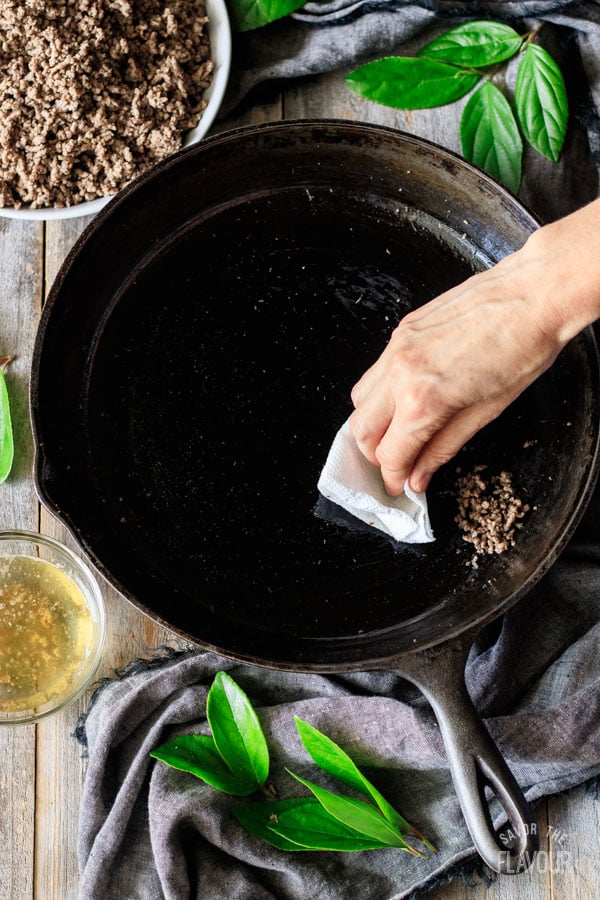 Add one tablespoon of the rendered fat back into the skillet, and sauté the onions and carrots for 8 minutes, stirring occasionally. 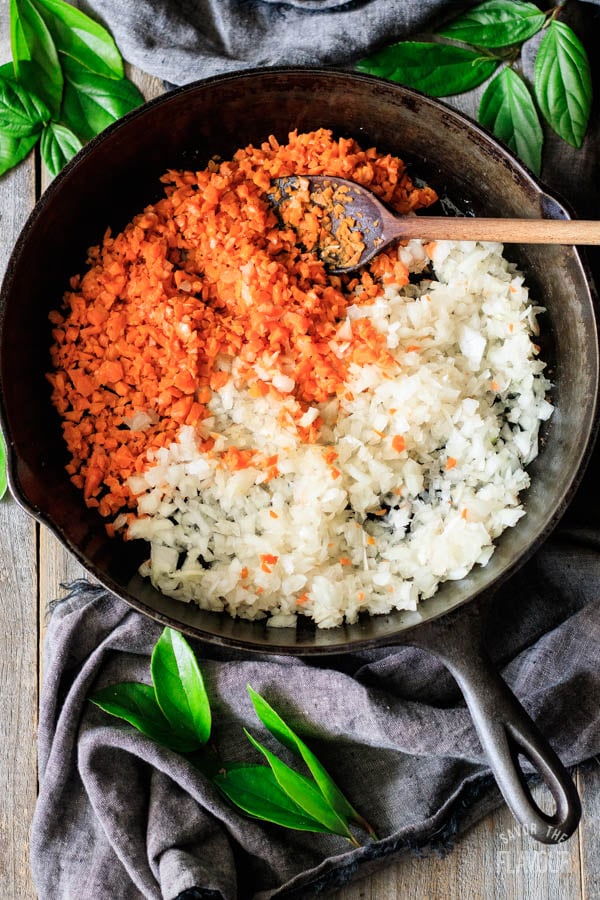 Add the minced garlic and ¼ teaspoon of salt, cook until fragrant, then add the rest of the spices.  Stir until well combined. 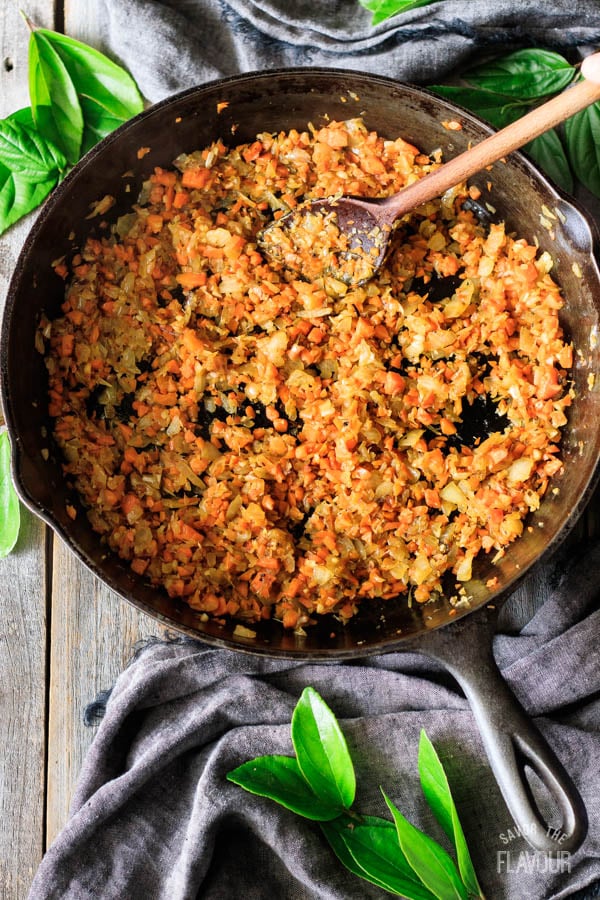 Put the cooked ground beef and peas into the skillet.  Stir and heat through over medium low heat. 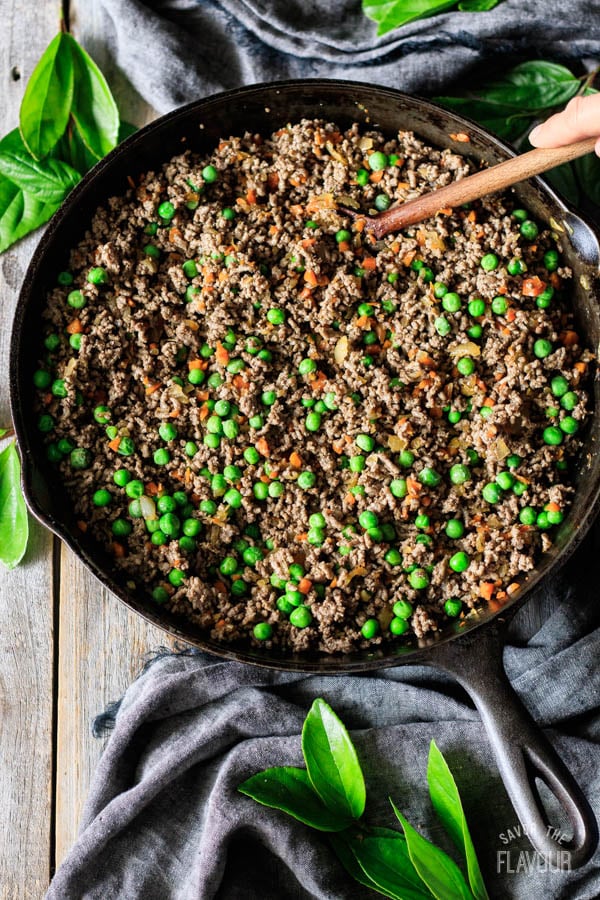 Start the gravy by measuring out the ingredients. 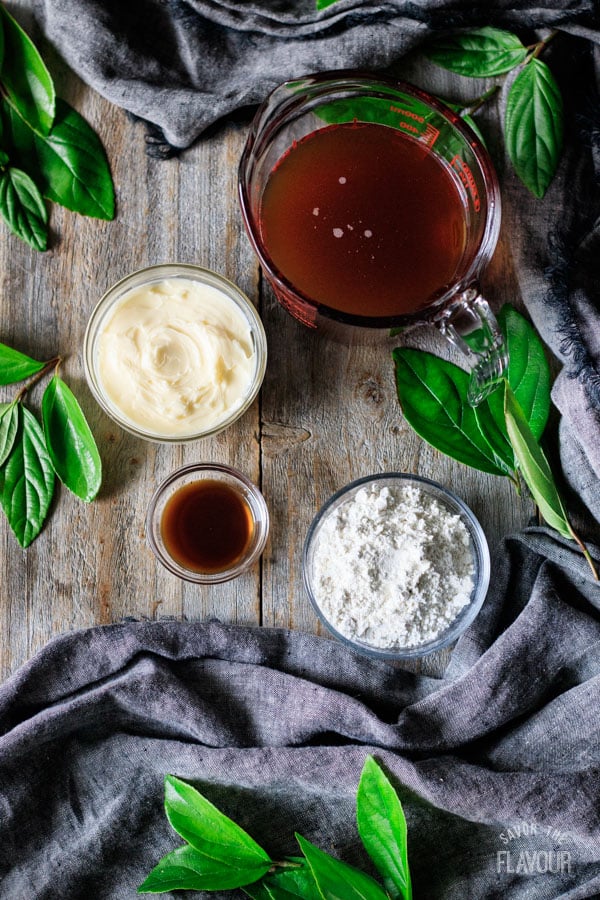 Melt the butter over medium heat and gradually add the flour, whisking constantly for 2 minutes to cook the flour. 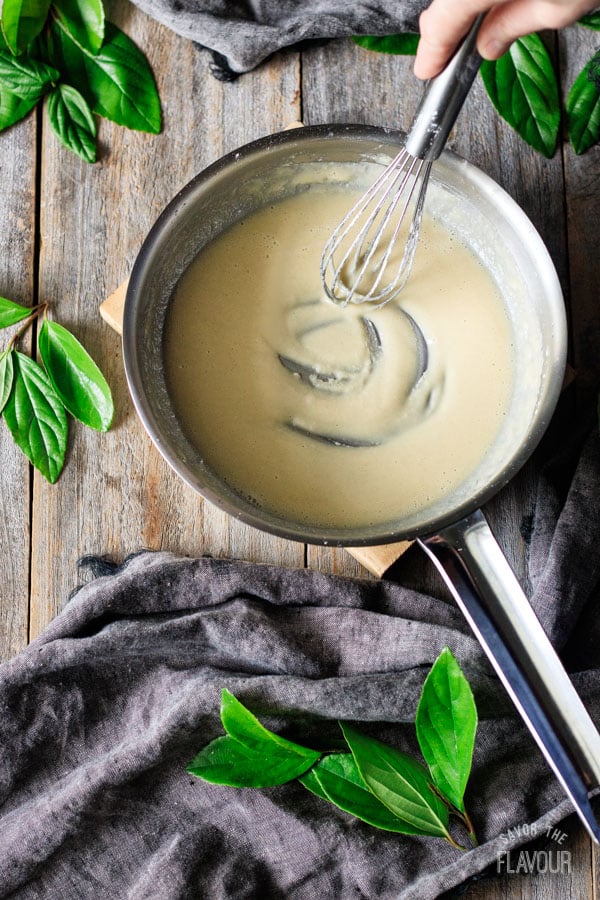 Add the Worcestershire sauce to the beef stock and whisk one cup of broth into the roux.  As the gravy thickens up, add the last ½ cup of stock. 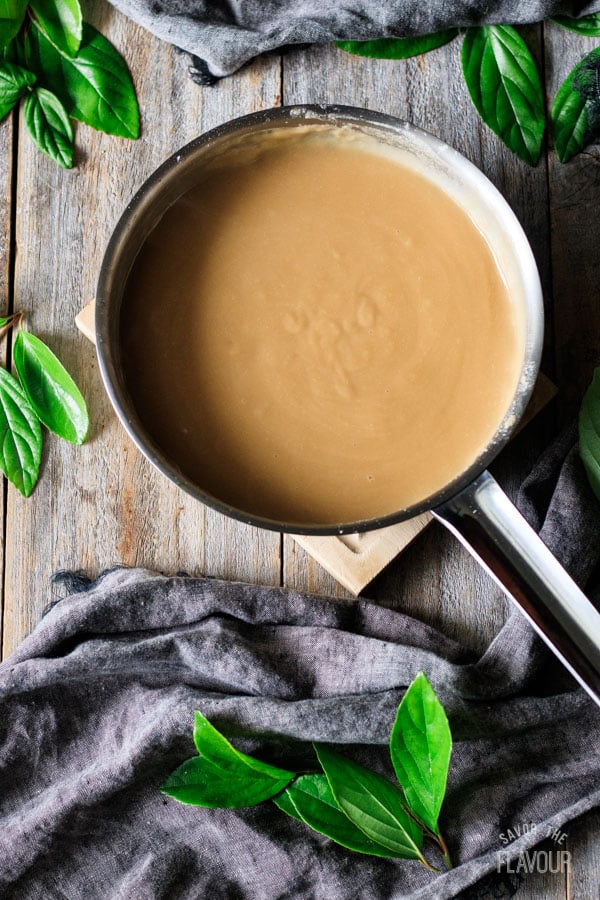 Mix the gravy into the hamburger vegetable mixture.  Taste and adjust seasonings. 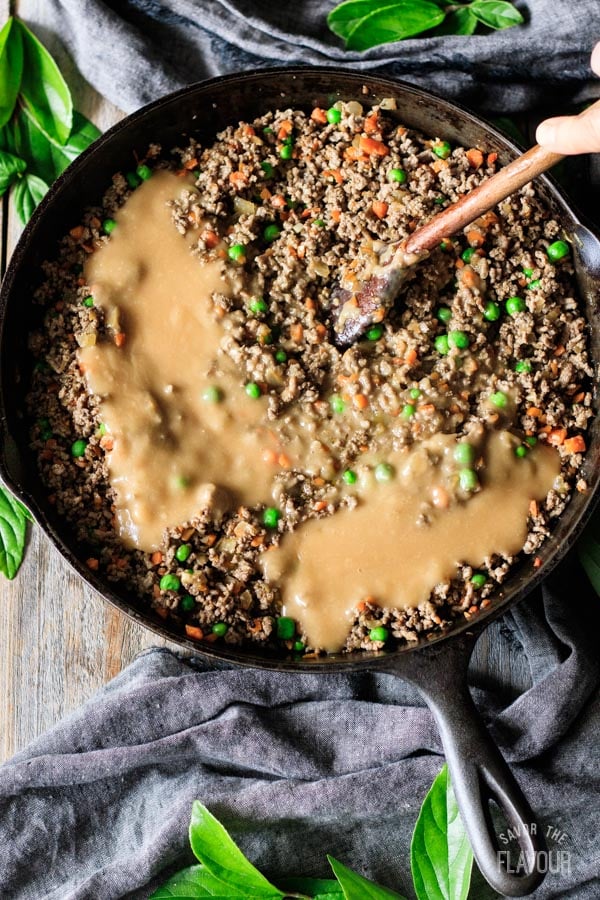 For the topping of the shepherd's pie, get one egg white, some grated cheese, smoked paprika, and chopped parsley. 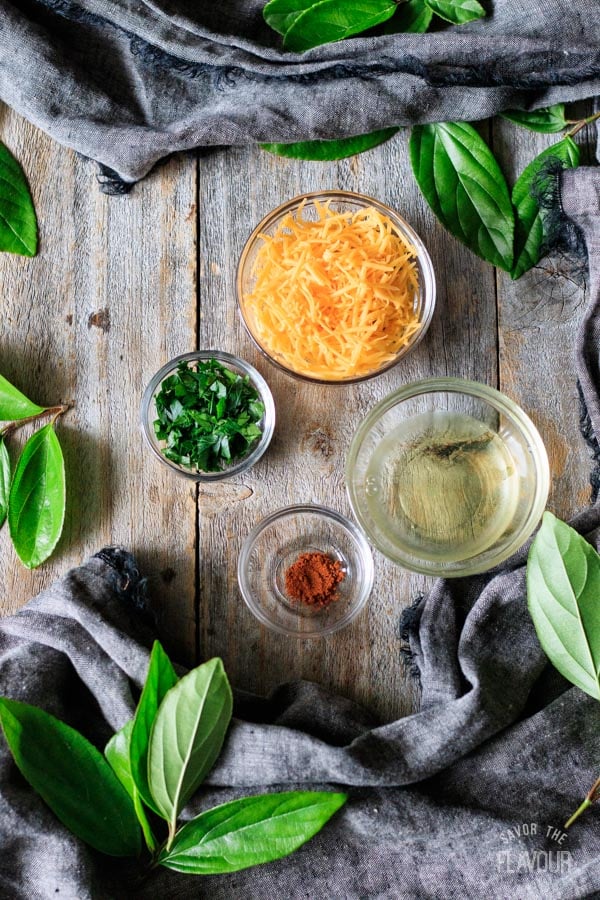 Assemble the shepherd's pie in a 10-inch cast iron skillet, a large Dutch oven, or a 9x13-inch casserole dish.  Start with the meat and veggies, then spoon the mashed potatoes on top.  Fluff up the surface with a fork, and brush with egg white to help it get golden brown. 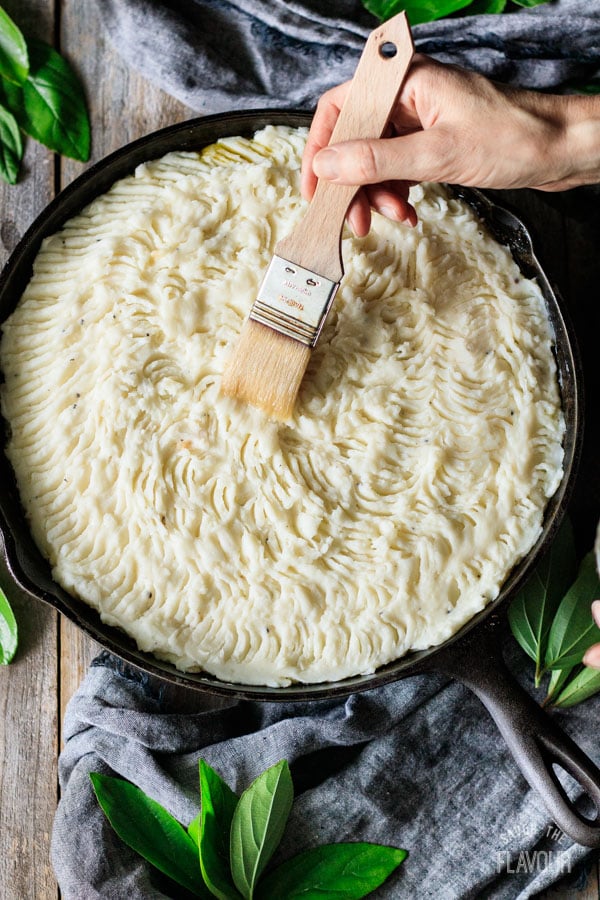 Sprinkle on smoked paprika and grated extra sharp cheddar cheese.  If you are planning on making this ahead, this is when you would cover it with foil and place in the fridge. 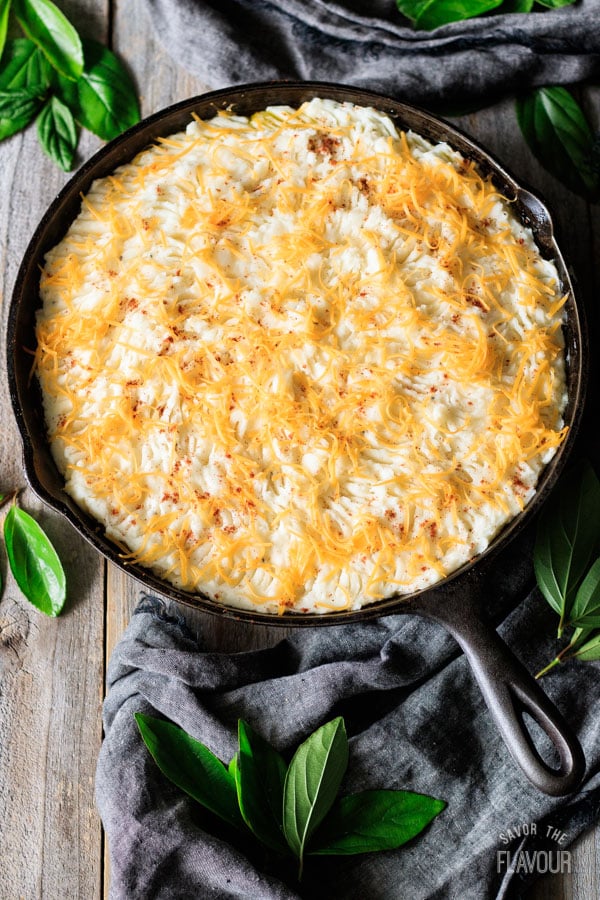 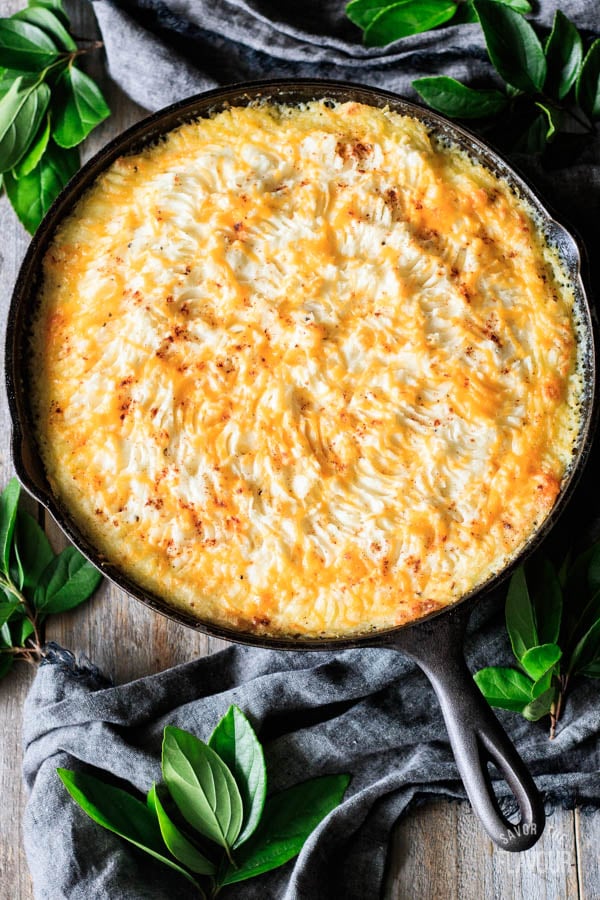 Garnish with chopped parsley, and let stand for a few minutes to set. 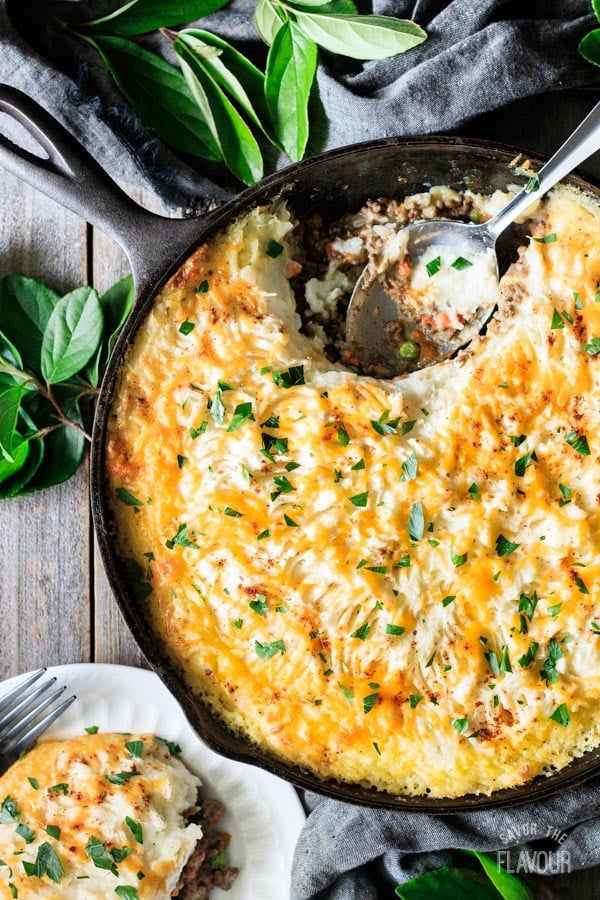 Enjoy a cozy dinner with this easy shepherd's pie recipe.  It's a simple recipe made with gravy and ground beef in a cast iron skillet.  This classic comfort food is cooked on the stovetop, sprinkled with cheese, then baked in the oven to make it golden brown.  Your whole family will be asking for seconds!

For the Mashed Potatoes

For the Meat and Veggies

Cooking the Meat & Preparing the Vegetables