Craving a fall dessert, but want something vegan?  Look no further than our gooey, fluffy, and soft pumpkin cinnamon rolls made without any animal ingredients.

If you enjoy homemade breakfast pastries, you will love our cinnamon raisin rolls and pecan sticky buns.

Fortunately, most of the ingredients in this recipe are basic pantry staples.  The only specifically vegan ingredients you'll need are plant-based butter and non-dairy milk.

Gather the ingredients for the dough for our vegan pumpkin cinnamon rolls.  Make sure to use vegan butter and non-dairy milk to keep this recipe vegan.

3. Switch attachments to the hook and knead for about 7 minutes on medium-low speed.

4. Let it rise until it has doubled in size, about 1 to 1 ½ hours.  Punch it down, roll it into a 19x19-inch square, and spread it with softened vegan butter, brown sugar, and cinnamon.  Roll the dough into a log and cut it into 12 equal pieces.

5. Let the buns rise until they are springy to the touch, about 30 minutes.  Then, bake them at 400 F for 25 minutes, covered loosely with a sheet of foil.  Remove the foil and bake for another 5 minutes.

6. Stir together the sifted powdered sugar and almond milk to make a quick glaze.

7. As soon as the rolls come out of the oven, spread them with the simple almond milk frosting.  Let them cool for 15 minutes before enjoying them.

Are all cinnamon rolls vegan?

Most cinnamon rolls are not vegan and you should definitely check the recipe or ingredient list if they are store-bought. Typically they include milk, butter, and sometimes eggs, which are all non-vegan ingredients.

Why won't my cinnamon rolls rise?

If your vegan pumpkin cinnamon rolls don't rise, the problem lies with the yeast. Either the yeast is old and didn't activate, or the location used to prove the dough is too cool. Look for a warmer spot or turn the oven on low and set the pan on the stovetop. Also, make sure the salt doesn't touch the yeast when mixing up the dough and don't add very hot liquids to the dough.

How do you keep cinnamon rolls soft and moist?

The best way to keep them fresh is to freeze them soon after baking.  Since homemade bread doesn't contain preservatives, it can go stale overnight, but freezing prevents this from happening.

Why are my cinnamon rolls not fluffy?

The two most likely culprits are the dough and the rising. The dough should be slightly tacky; sticking to a metal mixing bowl a little.  If it's dry and floury, or excessively sticky, the rolls won't turn out well.

Let the cinnamon rolls rise until they are springy to the touch before baking.  If they haven't risen long enough, they'll be dense and stodgy. 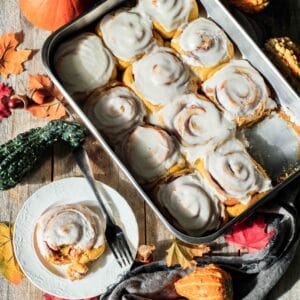 Bring Us Some Figgy Pudding!