Craving potatoes, but not sure what to make?  Try this game day recipe and learn how to make loaded potato skins.  It’s a classic your family and friends will love! 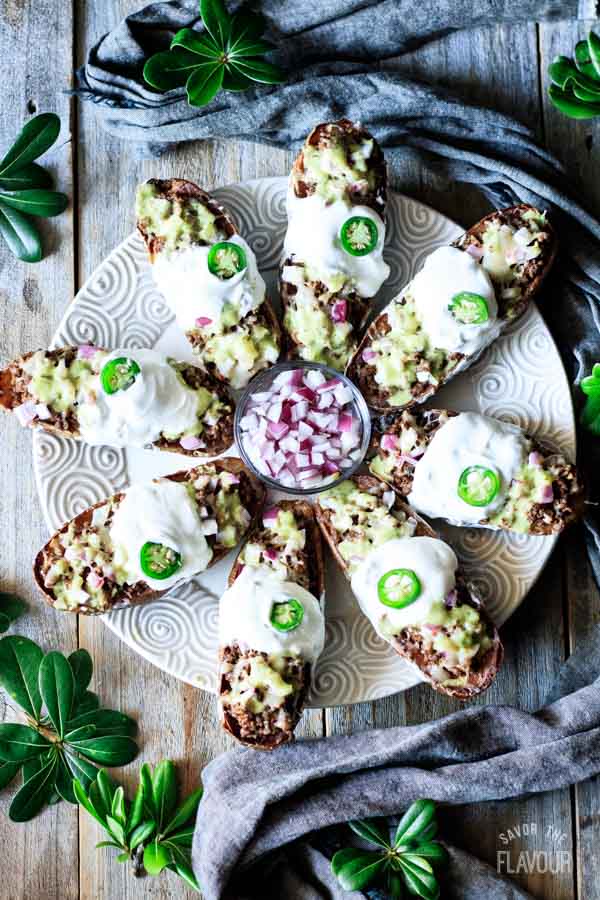 How do you clean this vegetable?

What potatoes are best?

Russets potatoes work the best.  Use medium-sized potatoes for appetizer sized potato skins.  If you want your them for a main course, buy the jumbo size potatoes.

How do you scoop out the flesh? 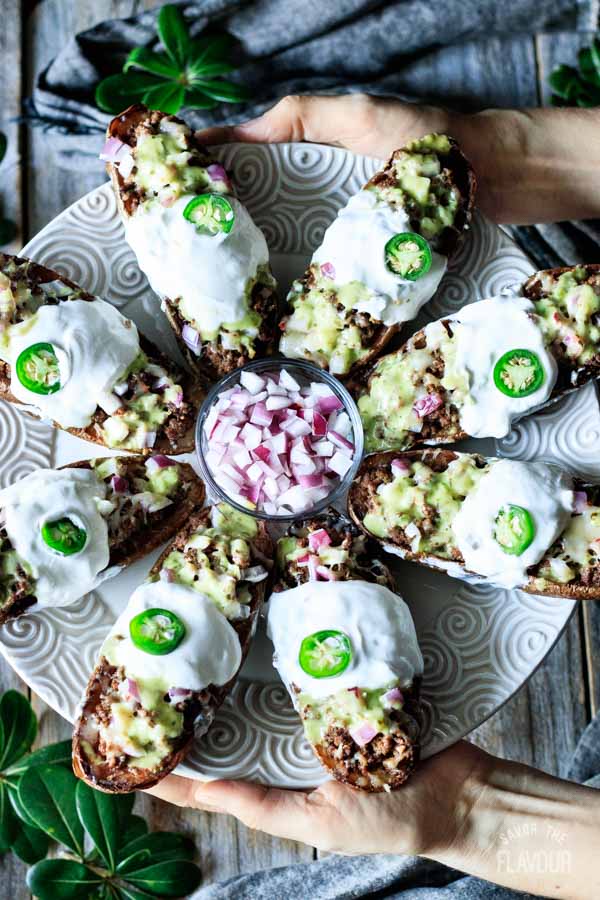 How do I make them crispy?

Can this recipe be made in advance?

Yes, part of it can be made in advance.  The potatoes can be baked and the flesh can be scooped out.

The taco meat can also be made ahead of time.  Each of these can be refrigerated or frozen until ready to use. 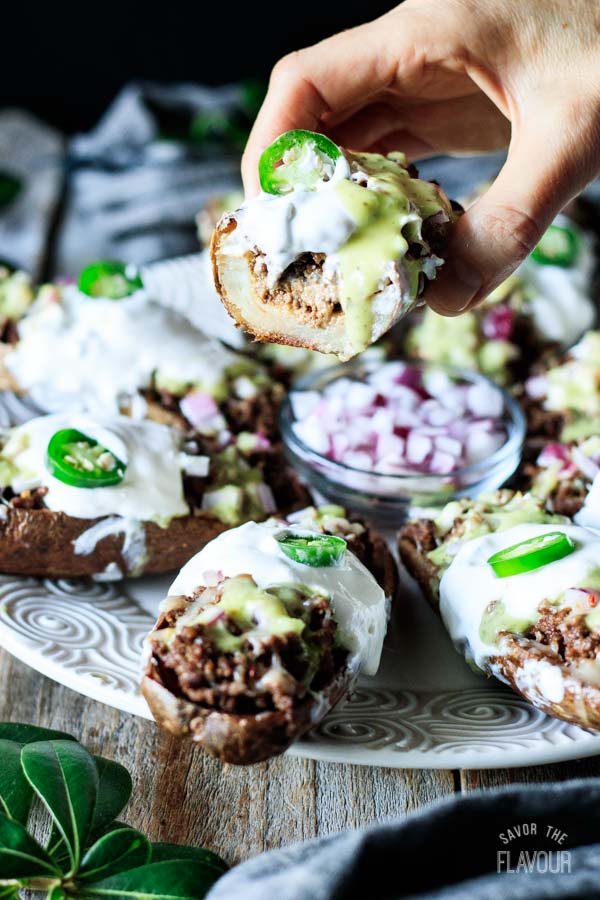 Is this recipe good for you?

The baked skins by themselves are very healthy for you.  Baked skins are high in fiber, potassium and are low in fat, cholesterol and sodium.

If you want to keep these healthy, you’ll have to limit what toppings you choose to put on top of them.  Sprinkle on seasonings, and add fresh chopped veggies like green onions and tomatoes for the healthiest skins.

Can I freeze this recipe?

Yes, it’s best to freeze the potato skins before they are crisped in the oven or have toppings on them.  Once the baked potatoes have the flesh scooped out, place the skins on a baking tray and flash freeze for an hour.  Remove them from the freezer, stack them, and freeze.

When ready to use, brush the frozen skins with oil and bake for 25 minutes each side at 425 F to get them crispy.

Gather all the ingredients.  Cook hamburger and simmer it with the taco seasoning, chop the red onion, grate the cheese, wedge the lime, and slice the jalapeno. 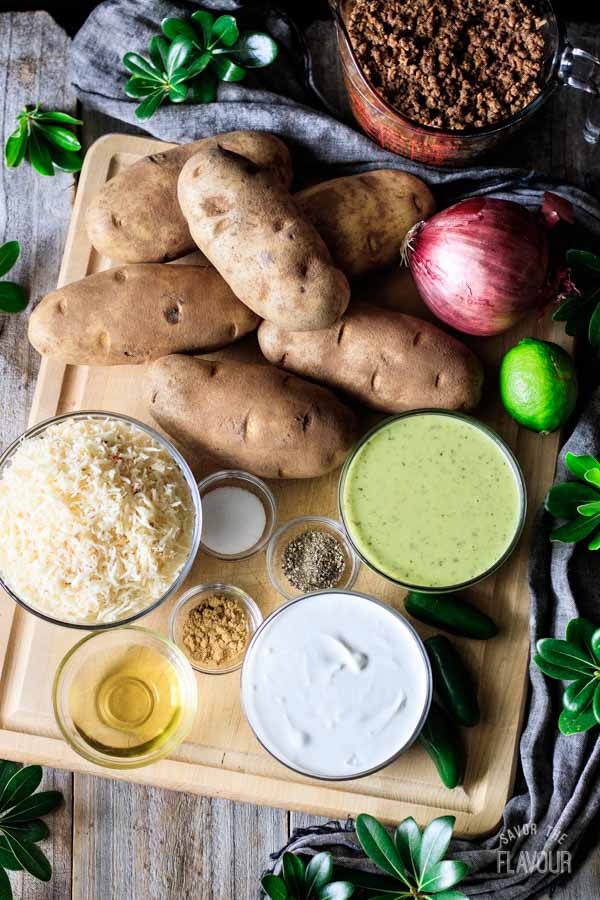 Wash and scrub the jumbo sized potatoes, then pat them dry with a kitchen towel.  Rub the cleaned potatoes with olive oil. 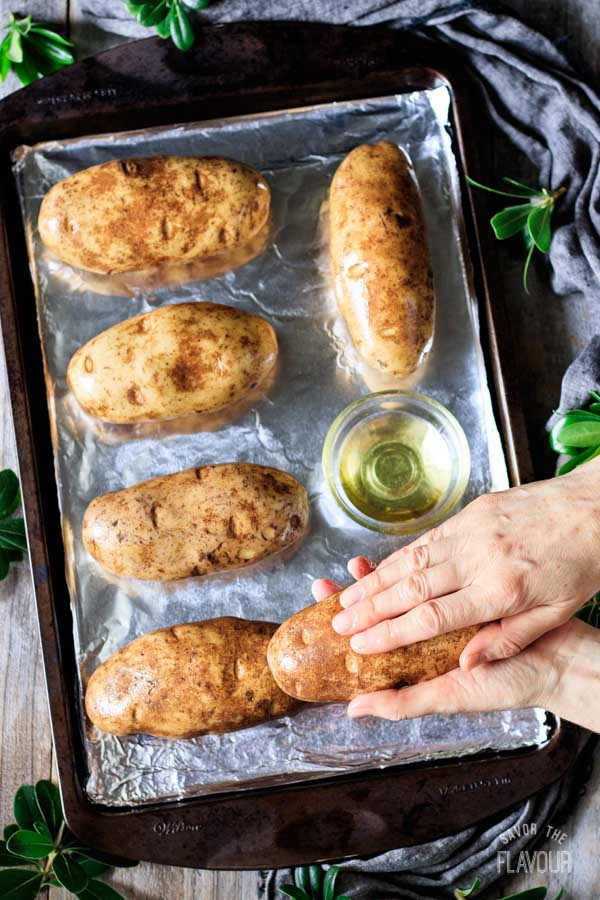 Once the potatoes are cleaned, prick them all over with a fork. 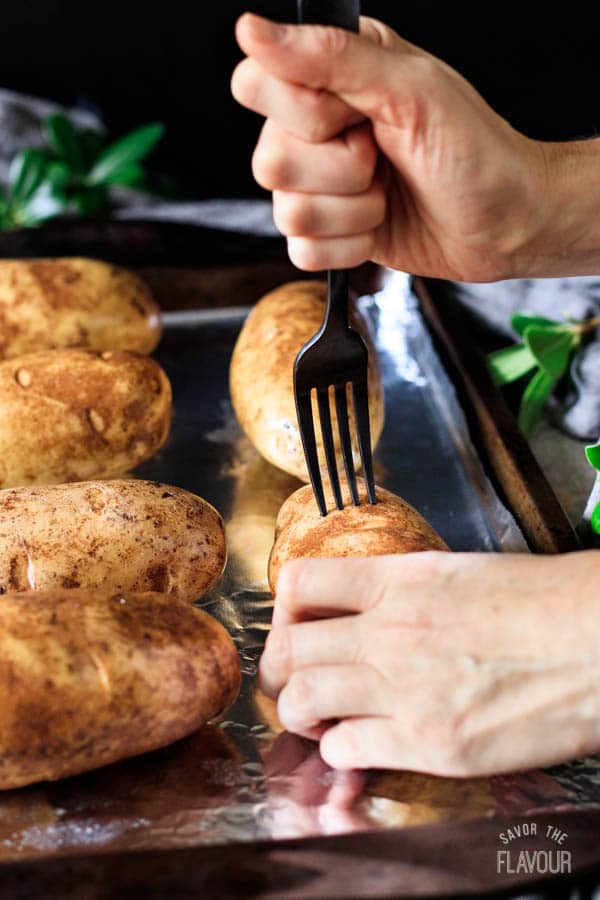 Bake them in a 425 F for one hour or until soft when pricked with a fork or squeezed. 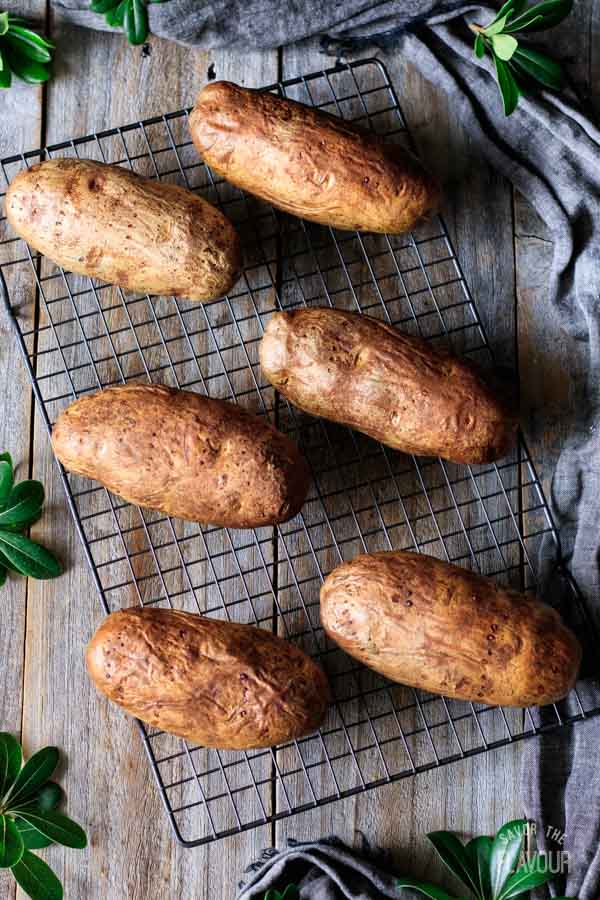 Allow the potatoes to cool, then slice in half lengthwise.  Use a knife to draw an oval. 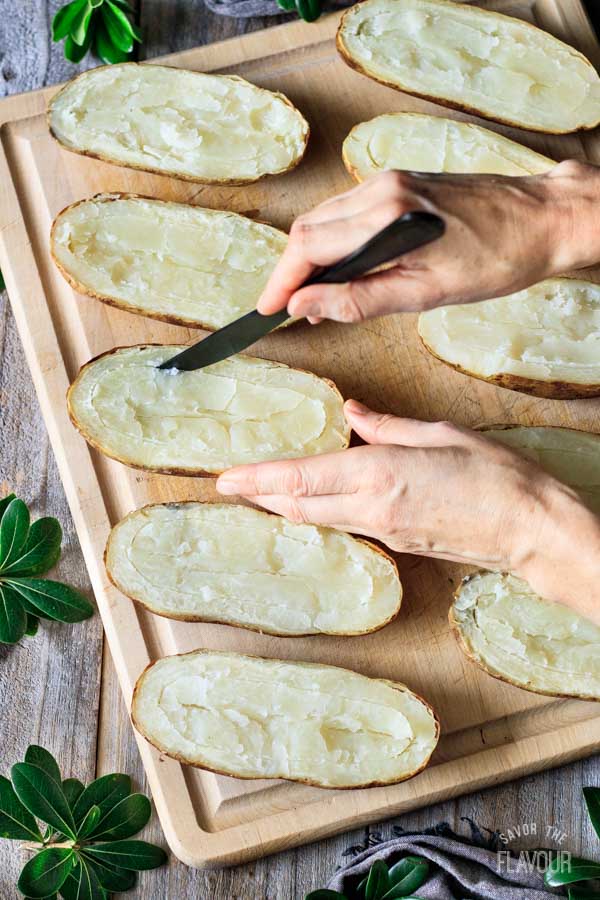 Use this line as your guide.  Scoop out the extra flesh with a spoon. 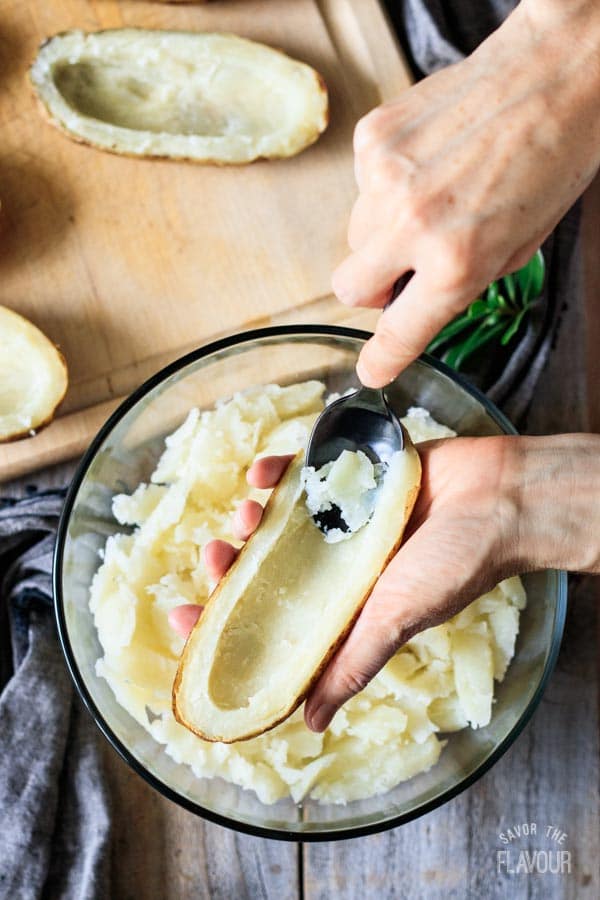 Place the 12 skins on a foil-lined baking tray.  Brush the insides with olive oil. 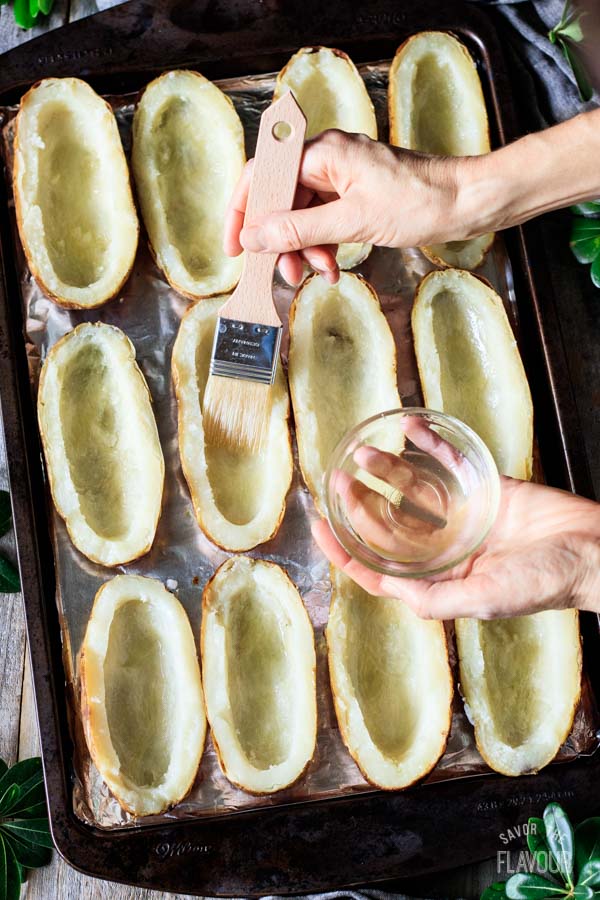 Turn the potato skins over and brush with more olive oil.  Bake at 425 F for 20 minutes to crisp up the outside. 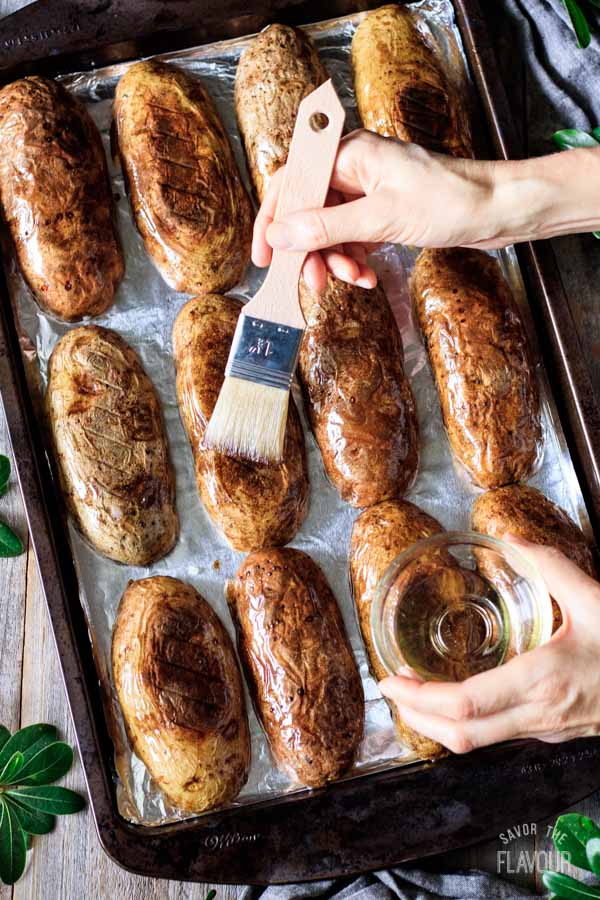 Sprinkle on the spices: salt, black pepper, cumin.  Bake for another 20 minutes at 425 F to crisp up the inside. 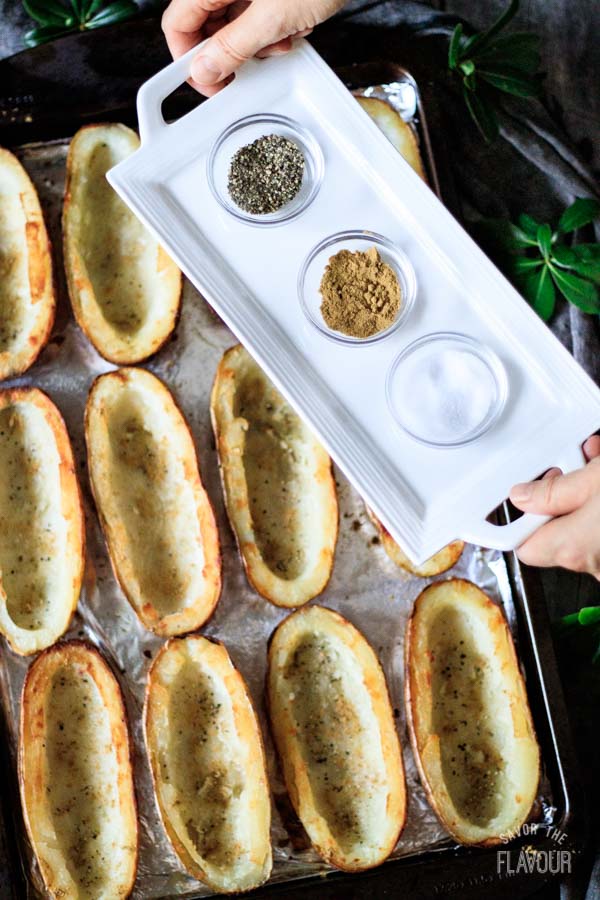 Sprinkle on 1/2 the grated pepper jack and place back in a 425 F oven for 4 minutes to melt the cheese.  If you want to have classic potato skins, you can stop here and add the toppings of your choice.

If you want to have loaded skins with a Tex-Mex flair, pile on the taco meat and squeeze one lime wedge per potato skin. 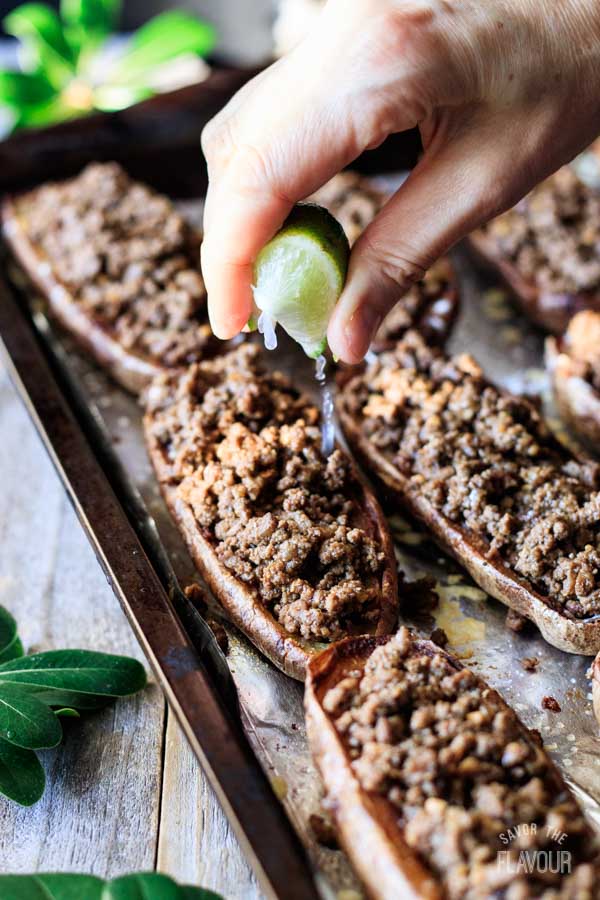 Add the chopped red onion and the rest of the grated pepper jack cheese.  Place back in the oven for 3 minutes. 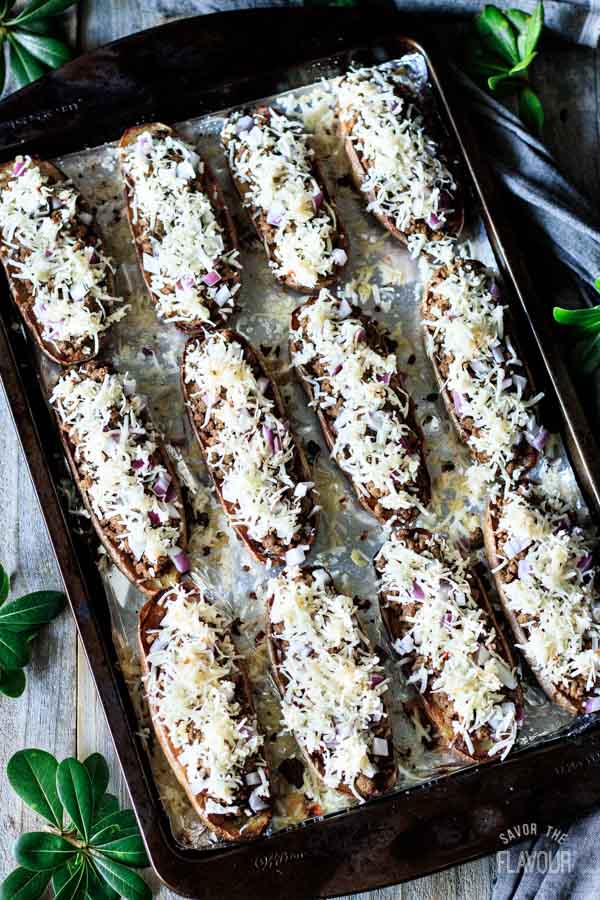 Drizzle with guacamole salsa, add a dollop of sour cream, and a few jalapeño pepper coins. 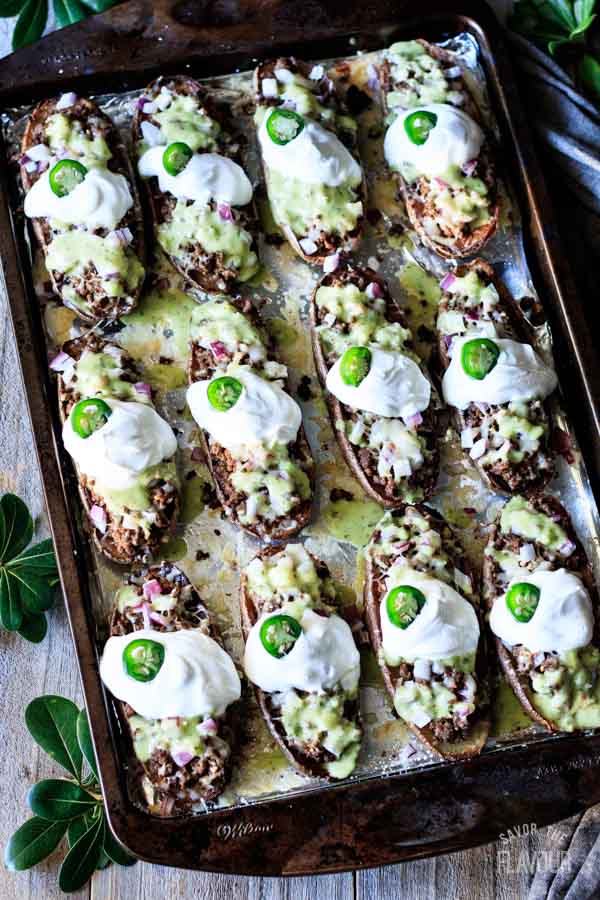 Serve warm with a lime wedge.  Ask guests to squeeze the fresh lime juice on their loaded potato skin just before eating. 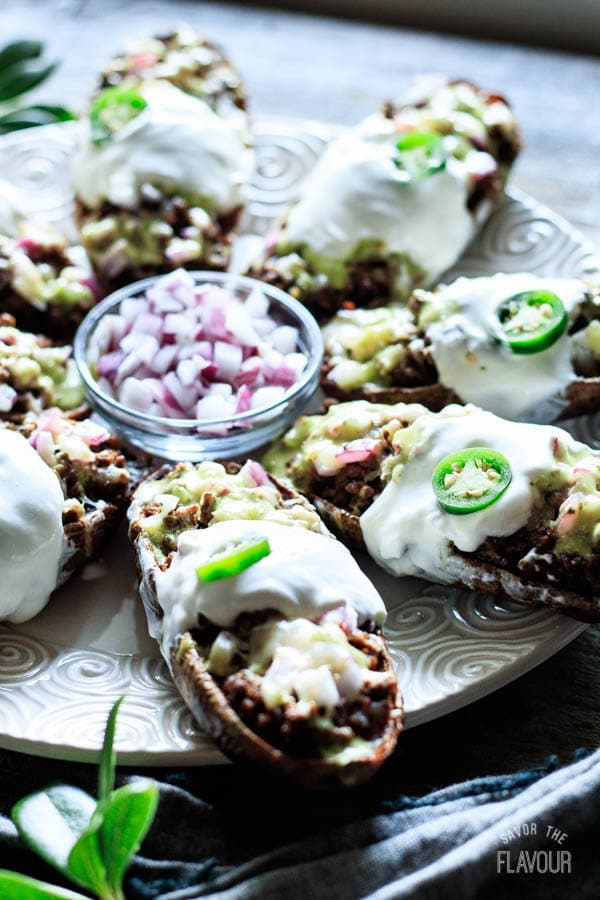 Be the star of your football party with these other delicious appetizers.

Loaded potato skins is an easy appetizer recipe to make ahead for your next football party.  These russet potatoes are baked to perfection, then packed with taco meat, pepper jack cheese, red onions, jalapeños, and sour cream.  Make this for a crowd or scale it down for two.  This wonderful snack is great for kids too!

For the Potato Skins

This recipe was originally published on October 26, 2018. 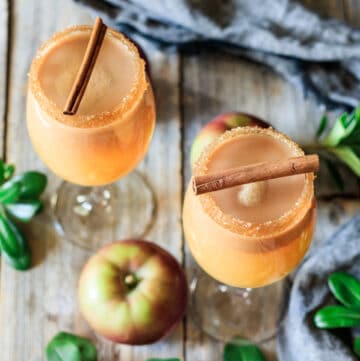