Mulled apple cider is a super easy hot drink that’s perfect for fall or Thanksgiving with its soothing flavors of apple and spices.  This warm and cozy drink can be made in the crock pot or on the stovetop.  It’s the perfect nonalcoholic drink for kids and adults this fall!

This recipe was originally published on October 12, 2017.

Mulled apple cider is my favorite autumn beverage.  The flavor and aroma of the allspice, cloves, cinnamon, nutmeg, and ginger are a tasteful announcement of fall’s arrival.  You’ll definitely want to make this for a fall dinner party or Thanksgiving!

What is mulled cider?

Mulled apple cider is unfiltered apple juice slowly cooked with warm mulling spices, such as allspice, cloves, and cinnamon.  The spices add an amazing flavor to the cider and unbelievable autumn aroma to your house!  I also like to add orange slices for a beautiful hint of citrus.

Is mulled apple cider good for you?

Plain, unfiltered apple cider is actually quite healthy for you.  Of course, it does contain natural sugars from the apples, but it contains large quantities of vitamin C and even some fiber.  Mulled apple cider typically isn’t quite as healthy as the plain cider because it has some extra sugar added, but it still is a healthy choice when enjoyed in moderation.

In the United States and Canada, most apple cider sold at grocery stores is nonalcoholic, and is basically unfiltered apple juice.  In the UK and other countries, most apple cider is alcoholic, having been fermented for a time.  Be sure to read the label to ensure you’re purchasing the nonalcoholic kind for this mulled cider recipe.

Do you drink apple cider cold or hot?

You can drink apple cider either way; it’s just a matter of personal preference.  I find that the flavors and aromas of the spices and fruit in the cider are much more pleasing when the cider is served warm.  However, if you would like to enjoy your mulled cider cold, just chill it in the fridge overnight or pour over ice.

Mulled apple cider is just plain apple cider that has been cooked with warming spices to improve the taste.  Mulled cider also usually has a sweetener added, such as brown sugar, for additional flavor.  Unfiltered apple cider that you buy from the grocery store is plain and has not been mulled with the spices.

What do you add to apple cider to make it taste better?

How do you reheat mulled cider?

Yes, apple cider can go bad.  If the cider has mold, is discolored, or smells/tastes off, then discard it.  Mulled apple cider should keep in the fridge for about 7 days without spoiling.

How to Serve Mulled Apple Cider

There’s a few exciting ways that you can serve mulled apple cider.  Here’s some ideas!

How to Make Mulled Apple Cider in the Crockpot

Pour the apple cider into a large crockpot and add the brown sugar.  Turn the heat to high.

Meanwhile, cut a square of cheesecloth to make the spice sachet.

Place the whole allspice and whole cloves in the middle of the cheesecloth and tie it up into a bundle with the twine.  Now, you’ve made your spice sachet!

Stir the cider to dissolve the brown sugar.

Add the spice sachet to the apple cider.

Float the cinnamon sticks on top of the cider.

Float the orange slices on top of the cider.

Cover the cider and cook on high for 1 hour, then turn the heat down to low and cook for another 3-4 hours.

Remove the cinnamon sticks after 3 hours of mulling, or the cider will be too spicy.  Dilute the cider with filtered water if it does get too spicy for your taste.

Don’t forget to remove the spice sachet, too, after 3 hours of cooking.

Enjoy these other cozy apple drinks this fall. 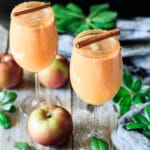 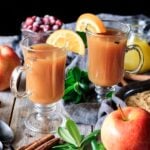 The pleasure of a 5-star review for this mulled cider recipe would be greatly appreciated.

Mulled apple cider is a super easy hot drink that’s perfect for fall or Thanksgiving with its soothing flavors of apple and spices.  This warm and cozy drink can be made in the crock pot or on the stovetop.  It’s the perfect nonalcoholic drink for kids and adults this fall!