Hoagie rolls are a delightfully crusty bread roll that makes an epic sandwich. You'll love the soft, springy texture this bread has under its chewy crust!

If you love bread recipes, you'll definitely want to try these ciabatta rolls and Waterford blaas. They both make fantastic sandwiches!

You don't need any fancy ingredients to make hoagie rolls! Let's talk about the key ingredients before we get started.

3. Knead until the dough passes the windowpane test (see recipe card for details).

4. Prove until it has doubled in size, about 1 hour.

5. Punch down, divide into 6 pieces, and roll each piece into a sausage shape.

6. Prove on a cookie sheet until the rolls are springy to the touch, about 45 minutes. Cut a slash on top of each one with a razor blade (baker's lame) or sharp serrated knife.

8. Let the hoagie rolls cool completely, about 30 minutes, then slice and enjoy.

What type of bread is a hoagie?

A hoagie is a mini bread loaf used to make sandwiches with meats, cheeses, and spices, and is especially popular in New Jersey, New York, and Pennsylvania. Depending upon where you are in New England, this sandwich or roll may be called a hoagie, hero, sub, grinder, spuckie, or wedge.

What is a hoagie roll made of?

Hoagie rolls are made from a basic bread dough that consists of flour, salt, yeast, sugar, water, and fat. The sandwich is typically filled with a variety of cold cuts, cheeses, peppers, onions, herbs, and condiments, such as oil and vinegar.

What's the difference between a sub and a hoagie?

Why is it called a hoagie?

There are several possible explanations for the name "hoagie." It likely came from the "Hog Island sandwiches" eaten by dock workers near Philadelphia. Other etymologies say it may be named after famous American songwriter Hoagy Carmichael, or after street peddlers called hokey-pokey men who sold these types of sandwiches. It may even be a mispronunciation of the term "hokie" sandwiches.

Leftovers: Eat on the same day of baking for the best freshness. Do not refrigerate the rolls, as they will quickly go stale; freeze them instead for longer storage.

Freeze: Seal the rolls in a zip-top plastic bag and freeze for up to 1 month.

These hoagie rolls are traditionally made into sandwiches. Although there are many variations on the filling, try a traditional one by layering sliced Italian deli meats (such as soppressata, capicola, mortadella) with sliced cheese and peppers. Sprinkle with Italian spices such as basil and oregano, salt and pepper, and oil and vinegar.

Make sure the cheese touches the bread on both top and bottom to prevent the bread from getting soggy. 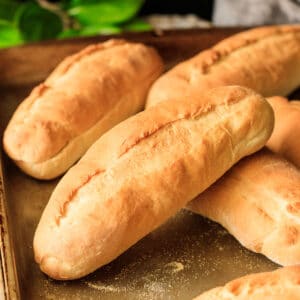 This post was originally published on February 14, 2018 and was republished on April 29, 2022 with updated photos and refreshed content.