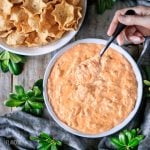 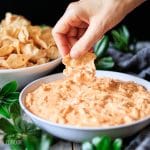 Cheesy, creamy, little bit of spicy...this buffalo chicken dip is one of the best football food snacks ever.   It's a 5-ingredient snack that takes just minutes to make.  You'll be the superhero of the Super Bowl party with this appetizer! 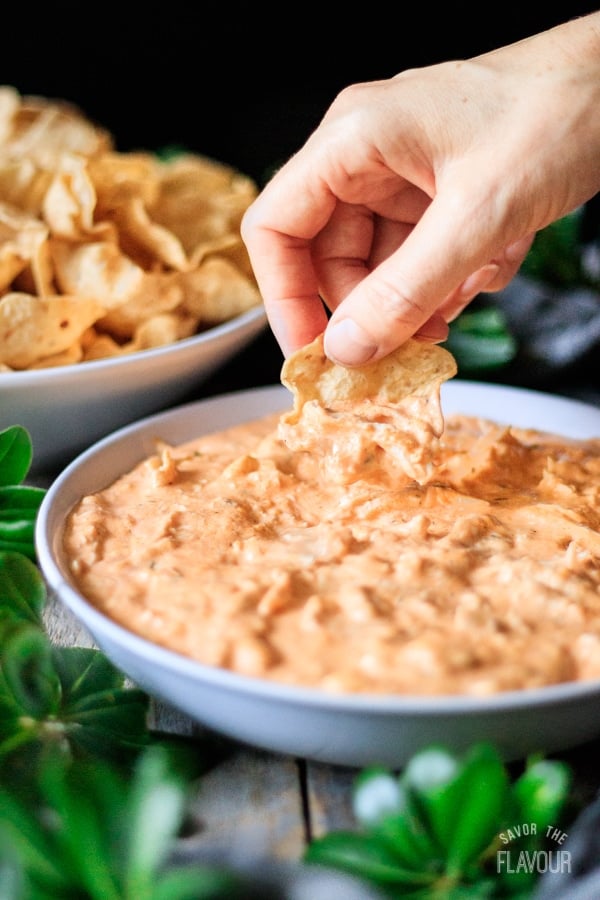 What's in this recipe?

The traditional version consists of shredded chicken, ranch dressing, buffalo sauce, cheddar, and cream cheese.  The ranch adds flavor, the sauce adds spiciness, the cheese thickens it and makes it creamy, while the chicken adds lots of protein.  Feel free to add additional spices or hot sauce to change things up.

The origins of this snack aren't clear.  We do know that it's a spinoff of buffalo wings, which were invented in 1964 by Teressa Bellissimo.  She created the wings as a late-night snack for her son Dominic and his friends, and they eventually became very popular at their family-owned bar in Buffalo, New York.  The locals started requesting the wings as well, and eventually they became a popular snack worldwide.

This appetizer is a nice way to enjoy the flavors of wings in a less messy format.  It has the heat, the meaty protein, and the creaminess of the traditional blue cheese dressing served on the side with wings.  Many recipes, like mine, use ranch dressing instead of blue cheese dressing, but feel free to use blue cheese if you like. 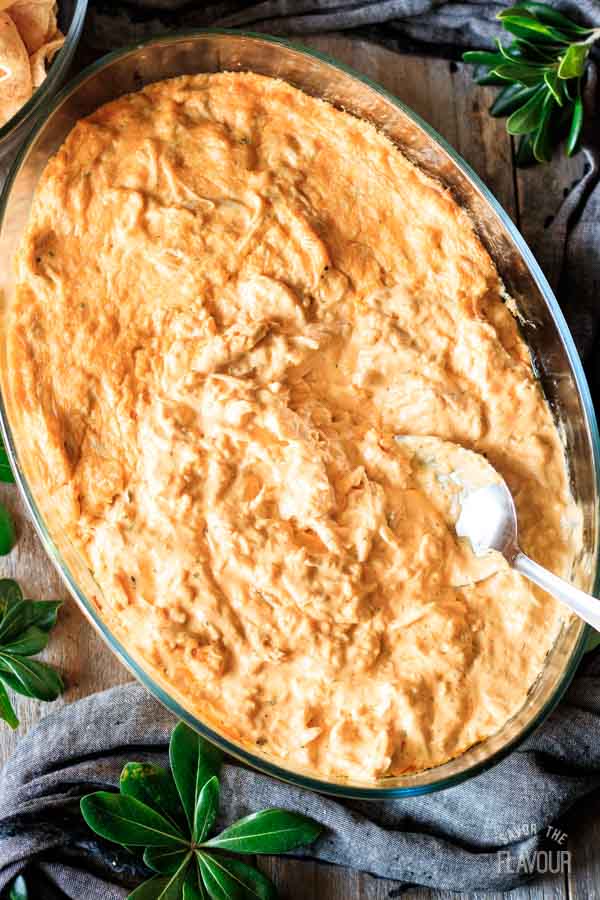 Why is my buffalo dip greasy?

It often becomes greasy when the oils from the sauce and the cheese begin to separate.  While this doesn't affect the flavor, it can make it look less appealing.  This separation may be due to overcooking.

You can reduce the chances of separation by baking it for less time in the oven, or making it in the crockpot instead.  The gentler heat of the crockpot (if it's set to low) shouldn't overheat it as easily.

How do you thicken the dip?

If it is runny, I'd recommend mixing in an extra cup or two of grated cheddar and reheat it to melt the cheese.  Melted cheese does thicken the liquid.

What goes well with this?

There are several things that taste great dipped in this appetizer.  Here's some ideas to get you started! 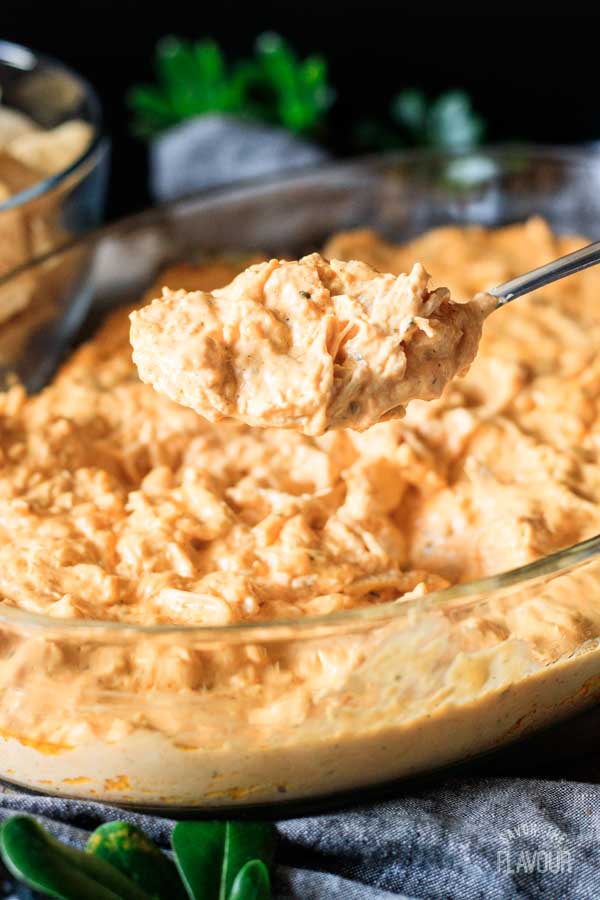 Here are some delicious and creative ways to enjoy leftovers.  Tell me in the comments on this blog post if you try one of them!

Can I reheat it?

Yes, you can reheat it in the microwave, the oven, or a crockpot.  It's best to reheat low and slow, as too much heat too quickly can cause the fat to separate.  Here's how to do it with each method.

How long is it good for?

It can keep for up to 1 week in the fridge.  Keep it tightly covered with plastic wrap or inside of an airtight container to maintain freshness.

Yes, you can freeze this appetizer before or after it's cooked.  Place it in an airtight container or zip-top freezer bag and freeze for up to 3 months.  Defrost overnight in the fridge, then reheat the next day in the oven or crockpot. 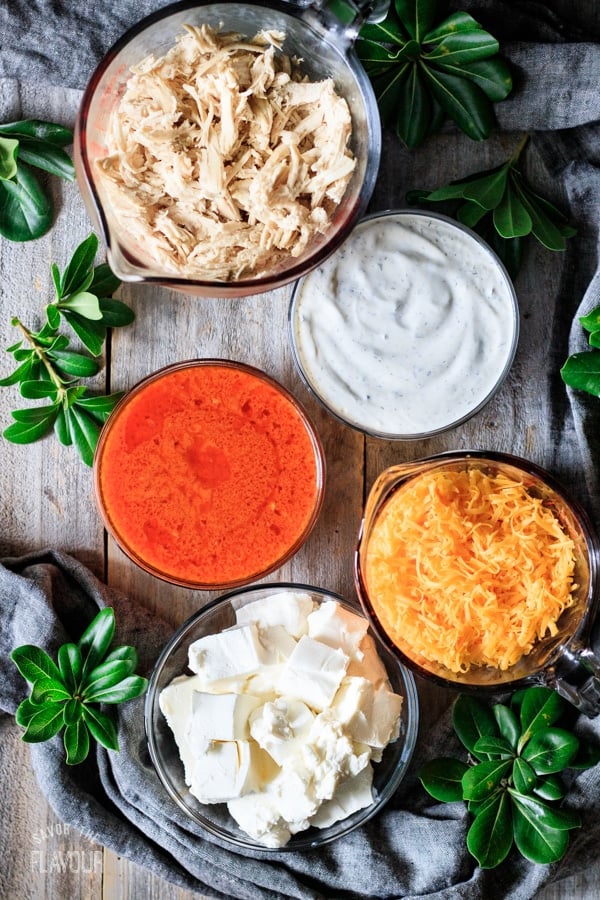 Beat the softened cream cheese with an electric mixer until smooth. 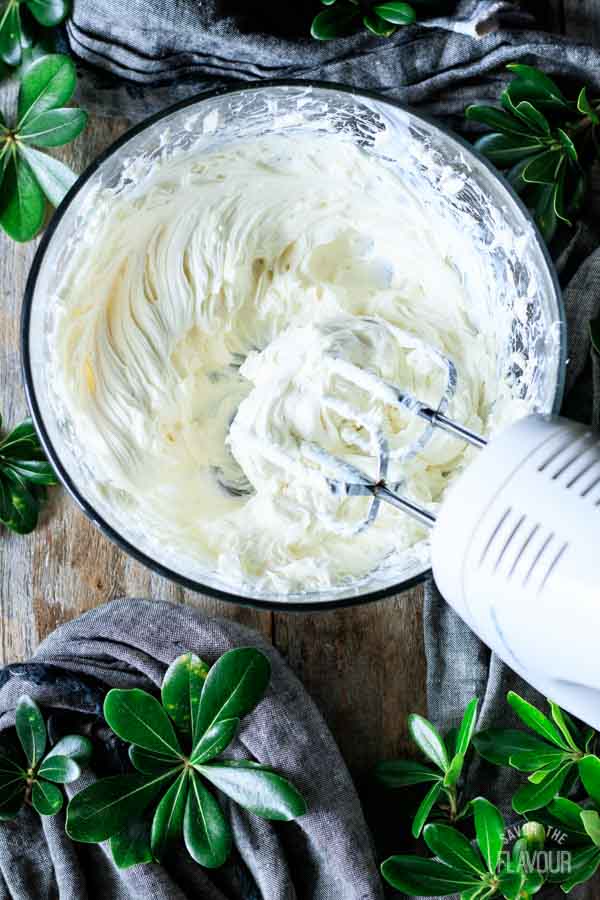 Pour in the ranch dressing. 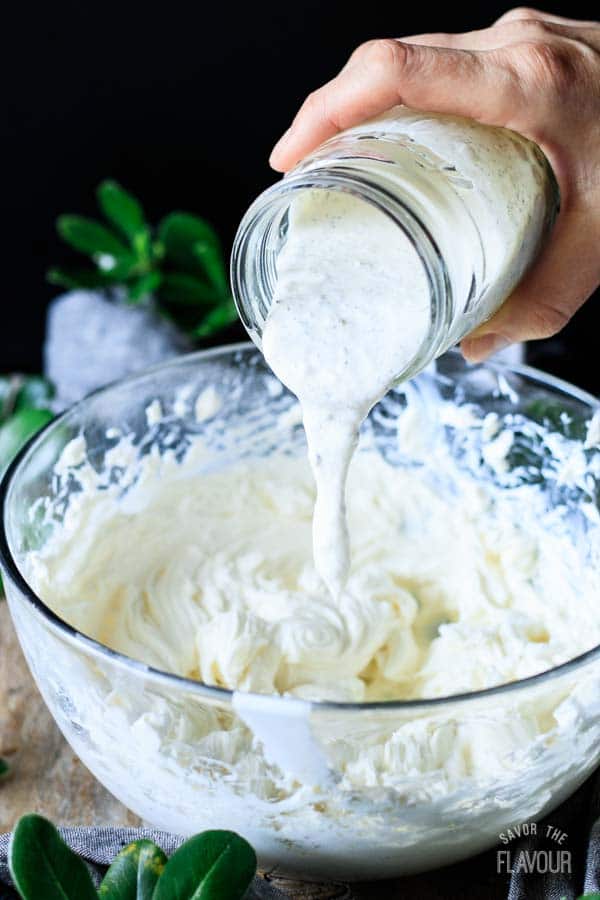 Pour in the buffalo sauce. 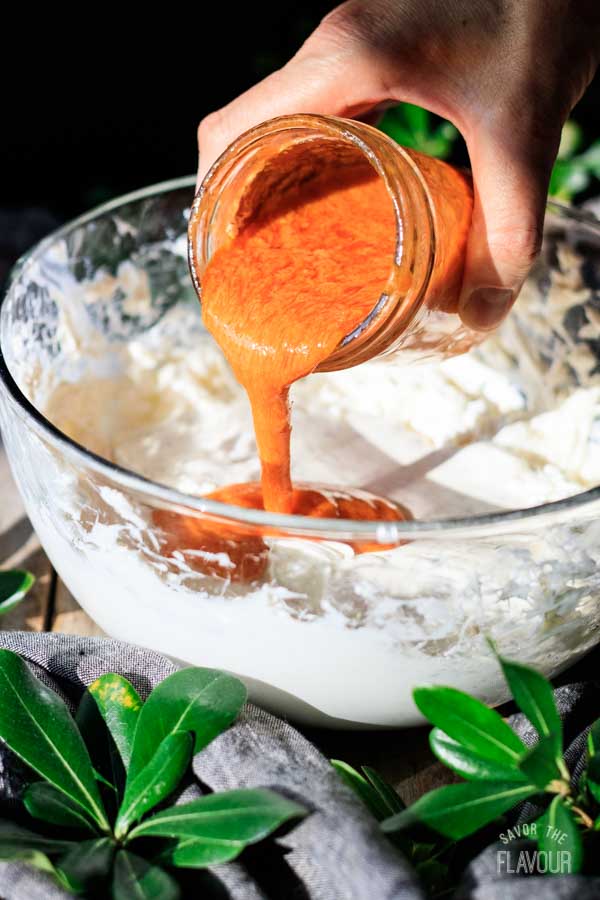 Beat the mixture together until smooth. 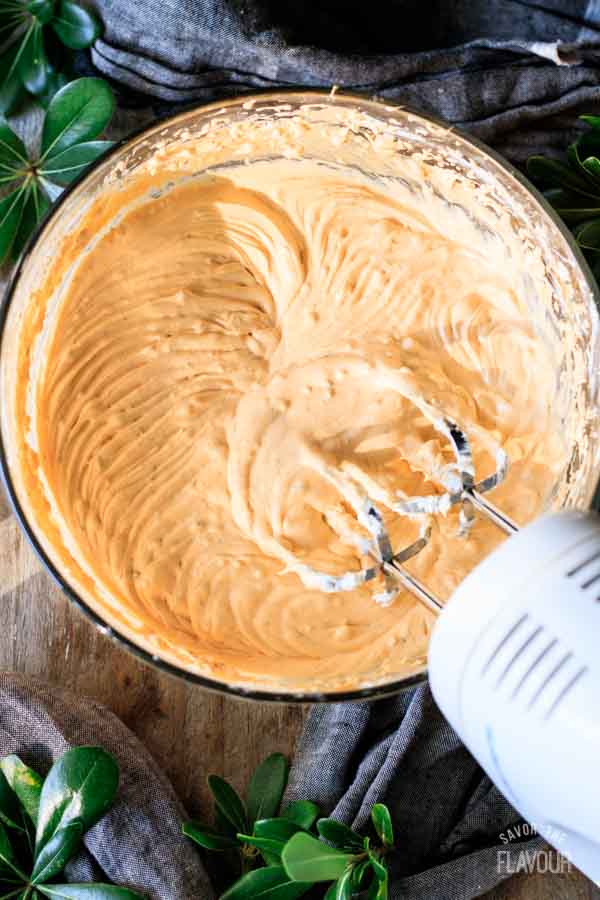 Dump in the chicken. 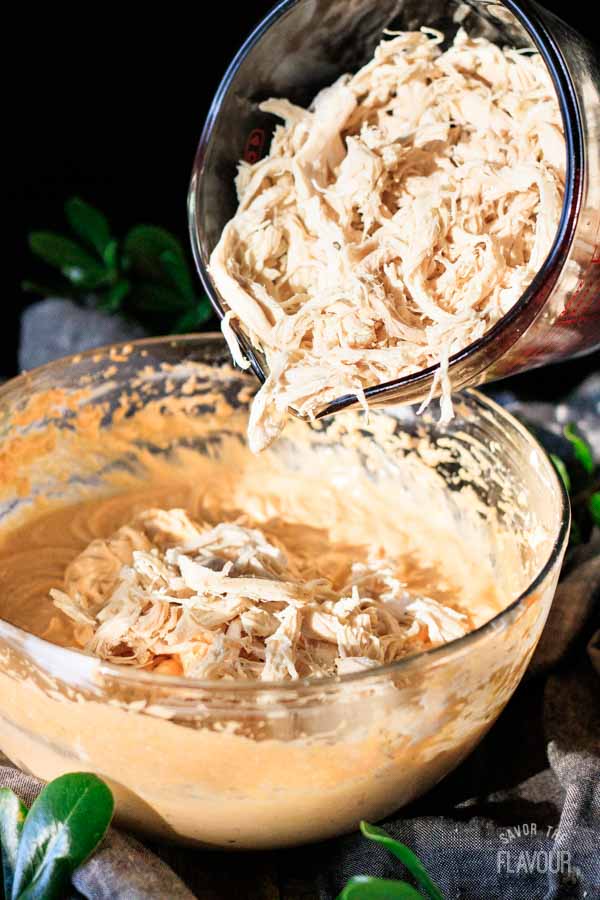 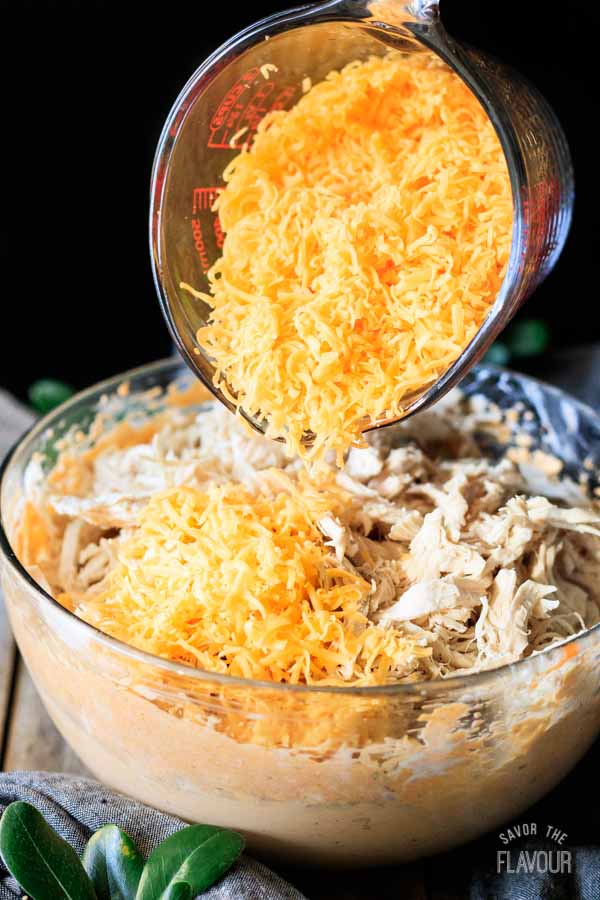 Mix in the cheddar cheese and shredded chicken until evenly mixed. 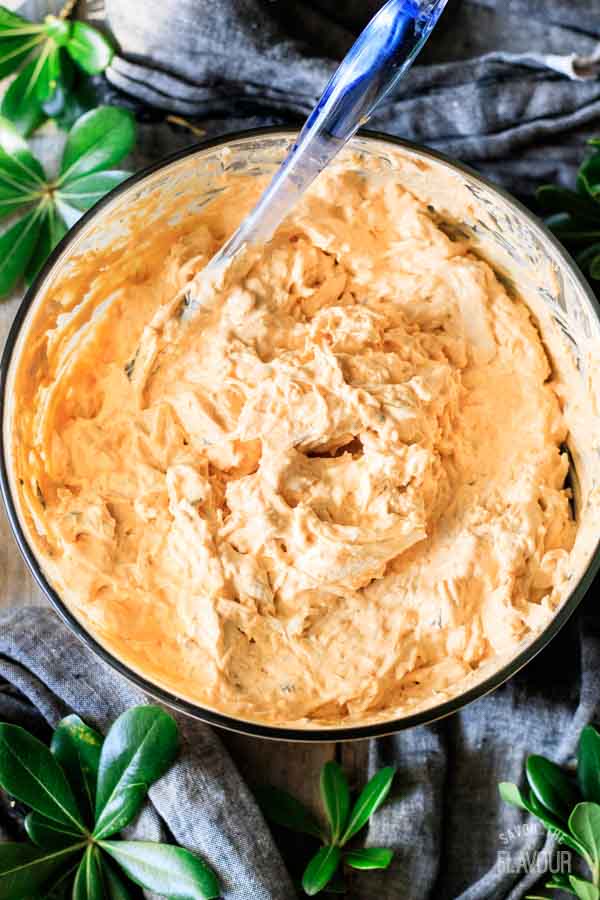 Spread in a casserole dish or put in a crockpot. 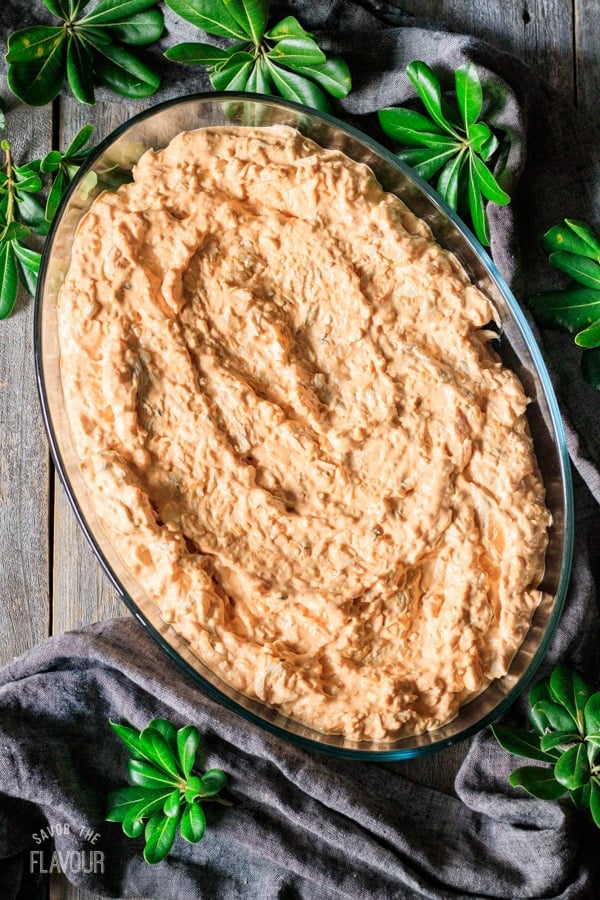 Bake at 350 F for 20 minutes or put the crockpot on low for 1-2 hours.  It should be warm, and all the cheese should be melted. 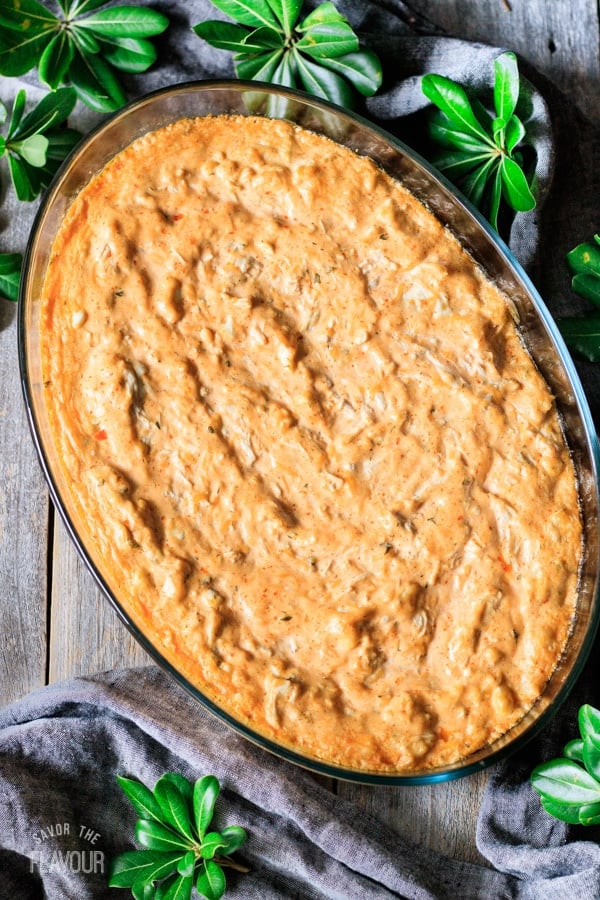 Buffalo chicken dip is a super easy, crowd pleasing appetizer that’s perfect for game night, Christmas, New Years, or anytime you’re having a party!  This appetizer can be baked or made in a crockpot.  The football fans at your house will love this spicy, creamy snack for the Super Bowl!