If you're looking for other Mardi Gras sweet treats, don't miss these great recipes for king cake and pecan pie without corn syrup.

Have you ever tasted bread pudding from New Orleans? If not, you need to make this delicious, easy dessert!

This dessert tastes a little bit like French toast, but sweeter and with less eggy flavor. It also has a juicy burst of flavor from the soaked raisins, and a delicate bourbon flavor from the sauce. Overall, it's absolutely delicious!

Fortunately, this New Orleans bread pudding recipe doesn't take any really fancy ingredients! You may already have these ingredients in your pantry and fridge. Here's the key ingredients in this recipe.

3. Soak the bread cubes in milk until it is all absorbed, about 10 minutes.

4. Whisk the eggs, sugar, vanilla, and spices together until blended, then pour over the soaked cubes and stir to combine. Mix in the soaked raisins.

5. Pour the mixture into the prepared pan, leveling the surface.

8. Heat the milk and cream together until they're warm, then dissolve the sugar and vanilla.

9. Make a slurry by mixing the cornstarch with a little of the warm milk mixture.

10. Add the slurry to the sauce and bring to a boil. Simmer and whisk until it's thickened, about 2-5 minutes.

11. Serve the bread pudding with the bourbon sauce drizzled on top.

Why is bread pudding so popular in New Orleans?

This simple dessert turns stale, old loaves into something delicious, which exemplifies the frugality and indulgence that Creoles have been known for. The New Orleans French bread is especially well suited for this dessert, as its lighter texture makes the pudding extra tempting.

Why do they call it bread pudding?

This dessert used to be called "poor man's pudding" since it was so frugal, but over time the name changed to "bread and butter pudding," then finally was shortened to "bread pudding." The term "pudding" dates back to the British origins of this dessert, as pudding in the UK refers to dessert in general.

Bread pudding was invented in England. In medieval days, each kitchen had a pudding basin, which was a large ceramic bowl used to store scraps of stale bread. These were then baked into the forerunner of the simple dessert that we know and love today.

Can I freeze bread pudding?

Yes, you can freeze it as long as you haven't poured a sauce on it. Make the sauce fresh when you serve the pudding. Simply seal the pudding in a zip-top bag or airtight container and freeze for up to 1 month.

Craving more sweets for Mardi Gras?  You're in the right place! 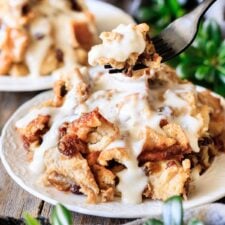 For the Bread Pudding

For the Bourbon Sauce

This recipe was originally published on February 14, 2020 and was republished on January 27, 2022 with refreshed photos and updated, reformatted content.